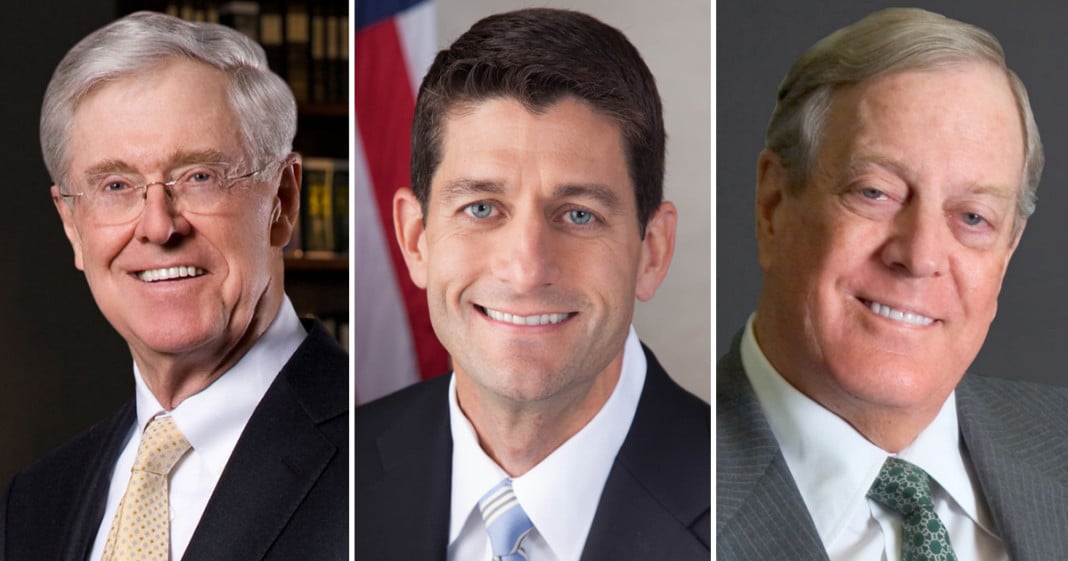 The Koch brother cronies have been relatively silent this election cycle, preferring to keep their verbal and monetary speech to a minimum in the face of a dismal primary field.

The Koch brothers, while being heartless greed-mongers are nothing if not business savvy, and they saw the previous establishment candidates, Jeb Bush and Marco Rubio, for the ultimate failures that they were. As for the three remaining candidates in the Republican field, the Koch brothers have kept their distance, wary of making a bad investment.

Now with the probability of a Republican contested convention in June, rumors are swirling that Koch industries are working behind the scenes to push for the nomination of Speaker of the House, Paul Ryan. Ryan has said more than once that he is absolutely not going to be the Republican nominee, but if the Koch brothers offer you an elevator to success, Republican opportunists will rush to hop aboard.

Ryan is just the sort of candidate that the Koch brothers look for: he is docile, even likable, while still subscribing to the same nut-job ideologies as the rest of the GOP. The difference between Ryan and the current field, for Charles and David Koch, is his ability to be easily controlled. Ryan and the Koch brothers want the same things, essentially, and his ascendance to the presidency would guarantee that the gravy train continued to flow for the billionaire brothers.

Time will tell whether this partnership will truly comes to pass, but if the convention emerges with a Ryan Republican nominee, be sure to follow the money trail. Without a doubt, it will lead you back to brothers, Koch.