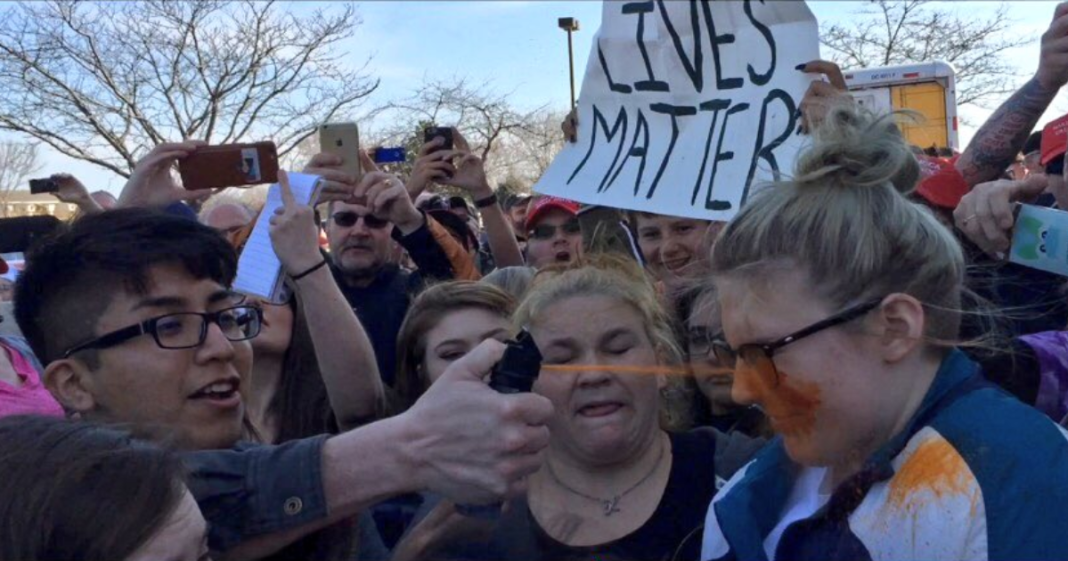 A young female protester says that a man touched her chest during a Donald Trump presidential rally in Janesville, Wisconsin on Tuesday afternoon.

The young woman who was in a group of protesters was arguing with a man in the crowd when she suddenly began shouting,

The man she is addressing raises his hands in the air and says “I never touched you.” Videos released so far show that the man’s hands appear close to her chest several times and he appears to be jabbing a folded piece of paper into her chest.

People who appear to be fellow protesters held the girl back as she attempted to surge forward towards the man. Shortly after, the enraged girl threw a punch into the crowd and another man wearing a Make America Great Again hat sprayed an orange substance which was likely mace into her face.

A later photo shows the young woman receiving medical attention and police say that they are looking for the man who she said assaulted her as well as the man who sprayed her with the mace.

As the young woman left the crowd, and later as her fellow protesters followed her, the crowd cheered and said “bye bye.” One person said “good job” in reference to the macing.

Trump’s events have gained a reputation at this point for being needlessly violent, angry, and volatile. This is the first reported instance, though, of a sexual assault taking place.

This event comes during the midst of Trump’s own scandal involving his campaign adviser Corey Lewandowski being arrested and charged with assault for grabbing a female reporter during a Trump event earlier this month.