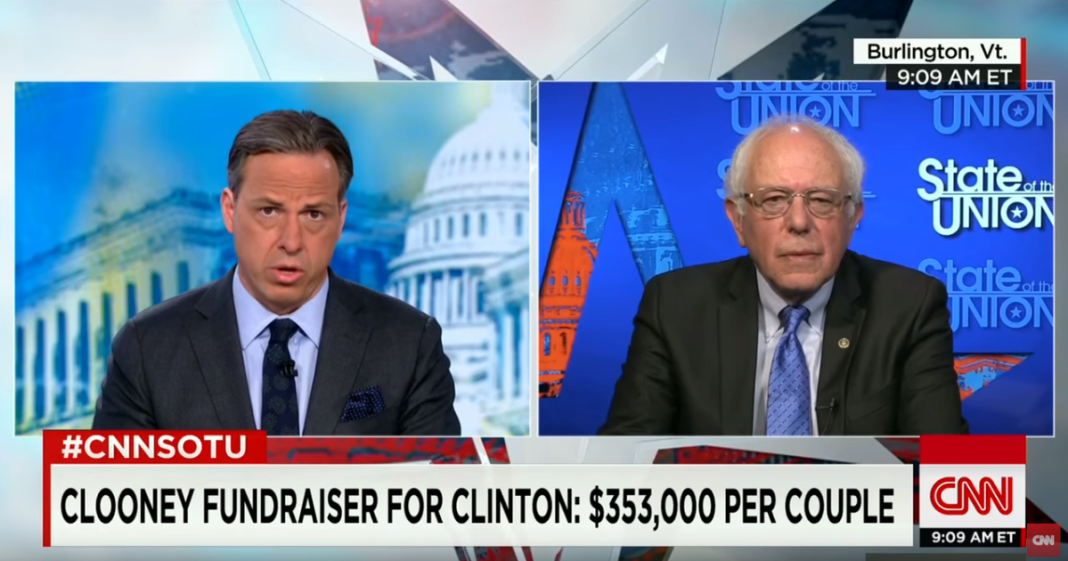 During an interview on CNN’s “State of the Union,” host Jake Tapper pressed senator Bernie Sanders to clarify his remarks made in an email to supporters wherein he referred to a fundraiser event hosted for candidate Hillary Clinton by actor George Clooney as “obscene.”

“It is obscene that Secretary Clinton keeps going to big-money people to fund her campaign.”

The dinner will reportedly charge $353,400 for two seats at the event.

Sanders, who has been consistently out-raising Clinton in campaign funds in 2016 has done so through entirely small, individual donations. The average donation amount, as Sanders likes to repeat during his rallies, is 27 dollars.

“I have a lot of respect for George Clooney. He’s a great actor. I like him…But this is the problem with American politics…Big money is dominating our political system. And [my supporters and I] are trying to move as far away from that as we can.”

Sanders reinforced that his disdain for the event was not related to Clooney, but was instead the perfect example of the sort of bloated money in politics that his entire campaign railed against.

“It’s not only this Clooney event. It is the fact that [Clinton] has now raised well over $15 million from Wall Street for her super-PAC, and millions more from the fossil fuel industry, and from the drug companies.”

Sanders’ entire campaign is based around the idea that money should not have an influence in politics. He maintains that Citizens United should be repealed and that only public money be used in elections. It is one element that has been the most defining different between his and Clinton’s campaign.

While Clinton claims that she agrees money should be taken from politics, she is only too happy to continue taking the money as long as it is available.