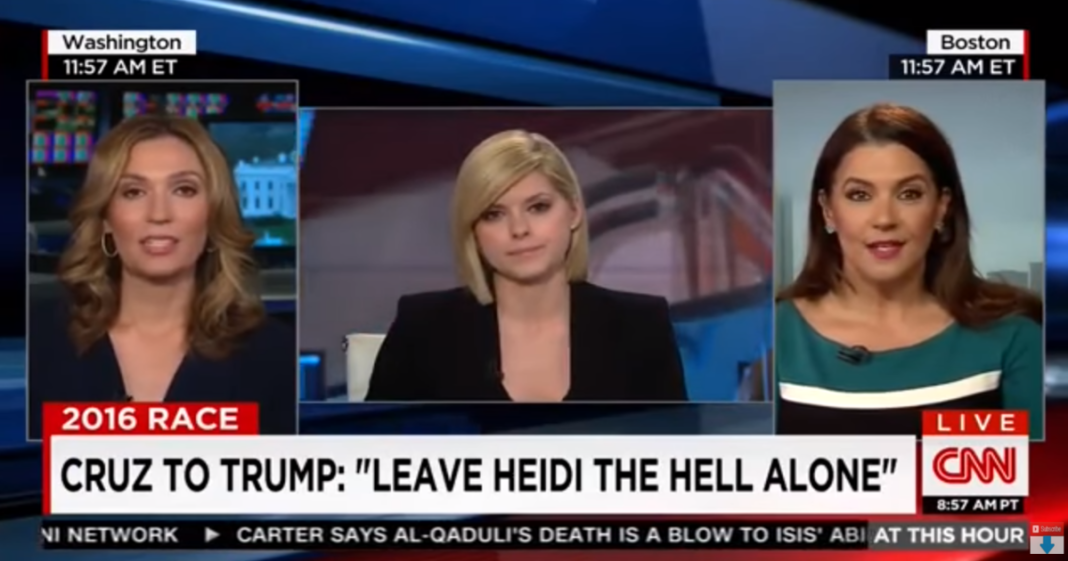 Throughout the most recent installment in the Ted Cruz v. Donald Trump fiasco involving the release of a National Enquirer story* which claims that Cruz has had five mistresses, Trump remained initially and uncharacteristically silent. Luckily for him, he had a host of female cronies to send out to media to make the accusations and implications that he would not, saying the terrible things for him that he would later remain blameless for. If it weren’t so damned evil, it would be genius.

On Friday morning when the tabloid gossip was just beginning to break, Adriana Cohen brought the rumors to the forefront of a discussion about the front-runners when she called out another pundit for being one of the alleged five women.

“Absolutely, I think we should move on and where we should move to is the National Enquirer story that has reported that Ted Cruz has allegedly had affairs with at least five mistresses — including, you’ve been named, Amanda.”

And just like that, what had previously been an unsubstantiated, whispered rumor from a gossip rag became legitimized because one Trump-loving pundit wanted to play the bad guy. Cohen’s comments, and the fact that she suddenly and without reservation lodged the allegations against an innocent women on live television, are disgusting. If CNN has any sense, Cohen will never be allowed to speak on the network again.

Even when Trump keeps away from the limelight, his little cronies are more than willing to step into the mud for him. Cohen and people like her should know that no matter how much loyalty she shows to Trump, and no matter the reputations she slays along the way, the same loyalty and consideration will not be shown to her.

* Note: The National Enquirer is wrong more often than it is right. It regularly claims that Hillary Clinton is on the edge of death and that she is a wild and crazy lesbian. The Enquirer has also accused the POTUS of having twice as many affairs as they leverage against Cruz. The fact that die-hard Trump defender Katrina Pierson denies the story is also strong evidence against it. It is smarter to believe that the story is an outright lie, particularly since it has been proven that Trump has strong ties to the Enquirer with strict directions to leave the real estate mogul off of its pages.