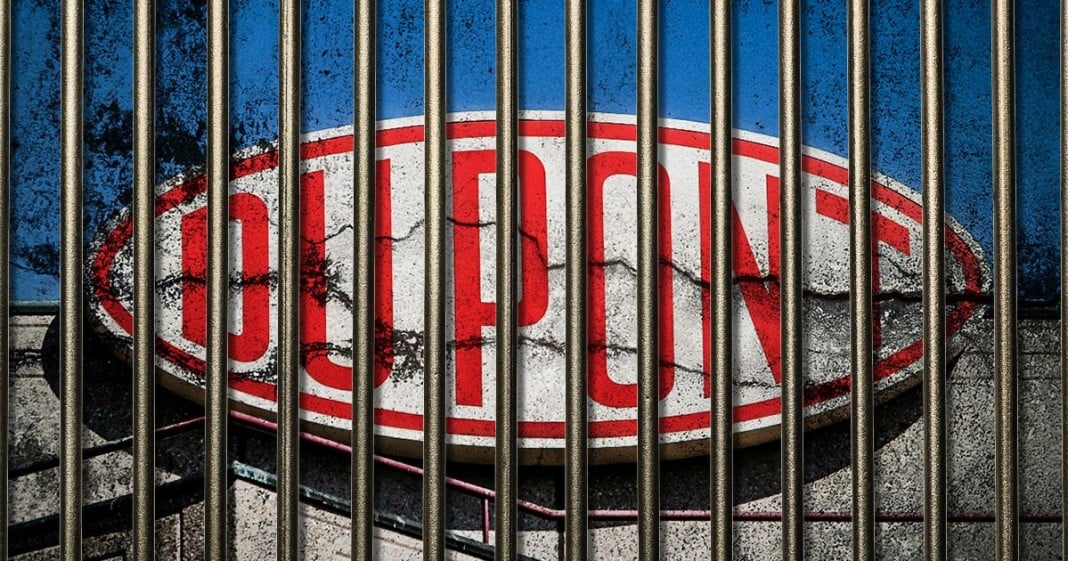 The DuPont corporation has been operating in America for decades, churning out dangerous products to every American man, woman and child. Unfortunately, for decades DuPont has been releasing a toxin into American waterways that will remain in our environment long after the rest of us are gone.

The chemical is referred to as C8 and it has been found in the bodies of 98 percent of American citizens, no matter where in the country they are. The chemical is what scientists refer to as biopersistent, which means that it does not leave the organisms it enters – ever. It does not dissolve, break down, wear away, or evaporate.

“It is very persistent in the environment, and on top of that, loves to travel in water and if ingested or breathed wants to stay in the blood. The body thinks it is food, so pulls it from the intestine, the liver then dumps it back to the stomach because it can’t break it down, then the intestine puts it right back into the blood.”

These toxins cause life-threatening conditions that may never go away including liver damage, kidney cancer, testicular cancer, and a host of other debilitating diseases. DuPont knew this, and still continued to dispose of it improperly, endangering millions.

DuPont is finally beginning to be brought to justice for their deception of the American people and late last year, they lost their first big case. With thousands more waiting in the wings, we can all be hopeful that people irreparably altered by C8 might find a bit of justice, but it leaves one wondering, why hasn’t the federal government stepped in yet?

It would seem like the sort of intentional deception that DuPont has taken part in for decades against American citizens would be the type of thing that our Department of Justice would be interested in investigating, particularly after DuPont’s loss last year held DuPont liable for $1.6 million in damages.

It turns out that in recent years, there has been a concerted effort to shift from prosecuting individual executives in cases like the ones against DuPont, instead prosecuting an entire corporation. Doing this saves prosecutors time and effort, but as Pulitzer-Prize winning journalist Jesse Eisinger observes, this means that no one takes a real fall that would create the sort of punishment necessary in cases like DuPont.

“We have this notion in our culture that prison would deter criminals. When it comes to street crime, this is possibly less true, but in a white collar setting it seems very true. White collar executives have a lot to lose: their stakes in society, assets, reputation, families. They also pay attention to the news—if their colleagues go to jail, they’ll pay attention. But it doesn’t work if a faceless piece of paper, their corporation, is paying in a way that doesn’t touch them at all, because the shareholders are shouldering the fine. Then they’re just untouched.”

So even though these individual cases against DuPont will continue to slowly bleed the company, the executives in charge may never see any real consequences for their actions. The prosecution of corporations should not replace the prosecution of individuals, in fact the two go hand in hand.

Eisinger offered a bleak view of the future of the DOJ, saying that he is not hopeful that the impotent agency will do much more to go after powerful executives like the ones who knowingly released a toxic chemical into America’s water supply.

“I don’t see any change in the status quo for a long time. Loretta Lynch and her administration have tacitly admitted there’s a problem, and now they want to prosecute individuals. That’s a very good thing: you’re admitting there’s a problem, and you’re articulating your goals. We don’t know if they’re going to be able to succeed, and my suspicion is they’re just going to prosecute low-level executives, because the top executives are so isolated.

What they’re going to have do eventually is to overhaul the DOJ, to change both the skill set and the resources. You can’t flip a switch. There is no solution to it. You need a completely different ethos at the top.”

Our feckless Department of Justice is either too corrupt or too afraid to go after corporate overlords who no doubt pay their bills. If we cannot depend on our DOJ to protect American citizens from knowingly being poisoned, what is the point of the governmental entity at all? It is time that the DOJ make use of the “Justice” moniker and aggressively pursue criminal investigations into DuPont and the executives who were at the helm when they dumped gallon after gallon of toxic C8 into public waterways.

Hear our take on the DuPont case and the Obama Administration’s inanction regarding C8’s toxic effects.