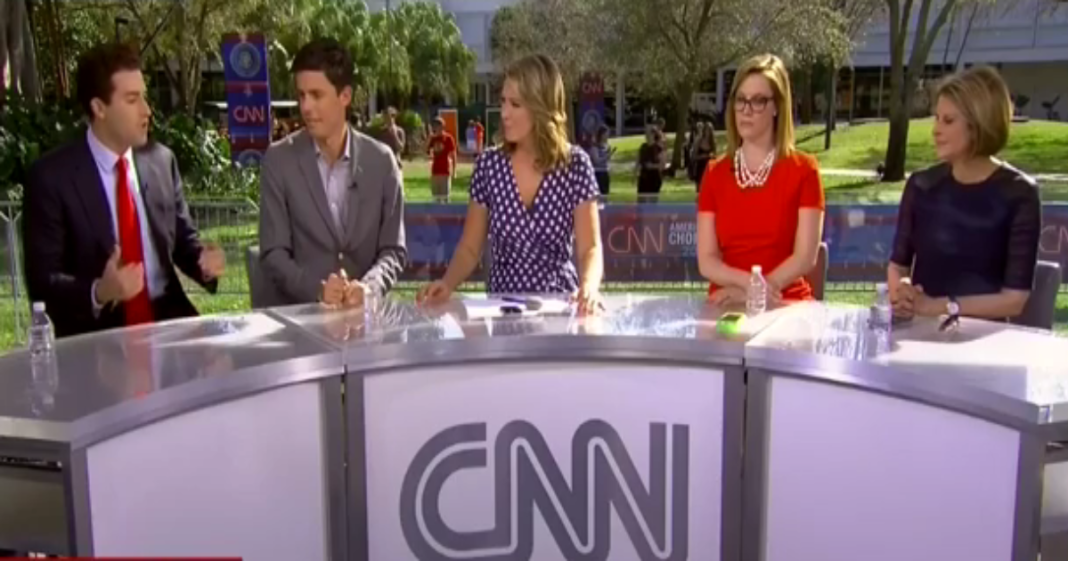 A panel of pundits on CNN addressed the controversy over a recent assault of a protester at a Trump rally, showing the clip of an angry elderly man sucker-punching a black protester who was being escorted from the arena by North Carolina police.

The first pundit to speak up on the subject was right wing Trump-adorer Andy Dean who complimented the 78-year-old man on his swing.

“I mean, at his age? We must say that is very, very interesting.”

Dean just barely managed not to say “that’s effing sweet, bro!” before pumping his fist in the air in the name of anti-P.C.. Dean then continued, making the assault the fault of liberals everywhere, instead of the violent man who committed the unprovoked act.

“Why is it at the Trump rallies liberals come and they create chaos, interrupting 10 or 15 times when you don’t see Conservatives going to Hillary Clinton and freak out at her rallies? It’s a lack of respect that liberals have for freedom of speech.”

“Donald Trump is a very powerful man, but he can’t control a 78-year-old man.”

The former communications director for the Jeb Bush campaign Tim Miller referred to Dean’s rationalization of the violent act as “Donald Trump culture,” and it is absolutely true. The Republican party has placed blame on anyone but themselves for a long time to justify terrible actions, but this is an all time low. The one to blame for this man’s assault is the one who committed the act. Trump is also to blame for the violent environment he has fostered by encouraging his supporters to lash out and promising to pay court fees for those who do.

In America, it is every person’s right to speak without fear of violence. This old man, no matter how “interesting” his strength is, broke the law.