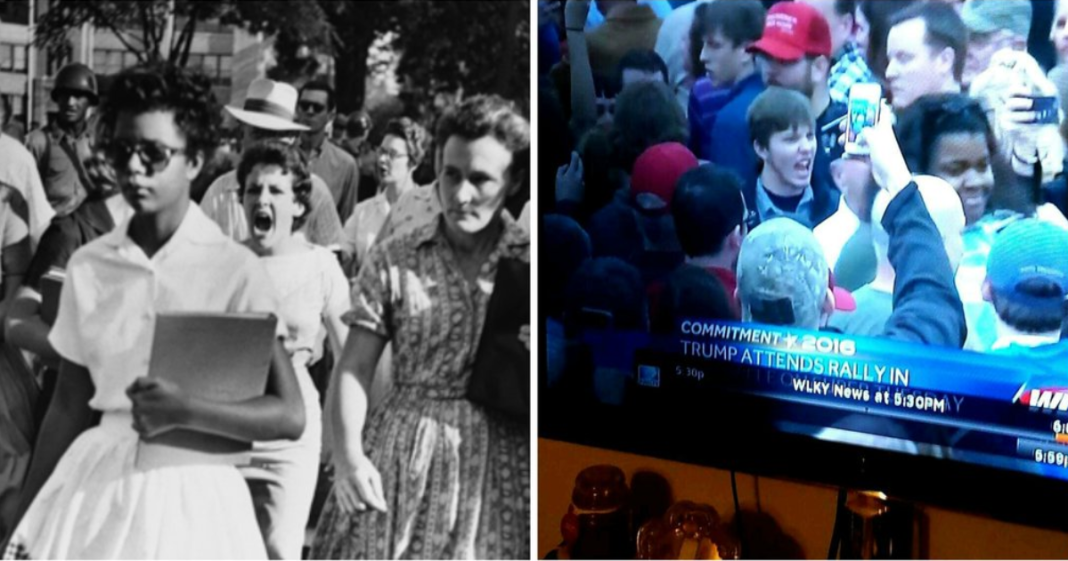 Last week during a Trump victory rally, a young black woman who was protesting the event was repeatedly assaulted and tossed around the room by hateful men.

The scene evoked similar memories of schoolchildren being threatened during forced desegregation in the south so many decades ago. While the actions by these men seem like something out of a long-gone history, the popularity of Donald Trump has brought these racial tensions to the forefront.

Shiya Nwanguma told her story in a video clip posted to Twitter, reporting that the angry men seen assaulting her called her a “n*gger” and a “c*nt,” among other things. They threatened her and violently shoved her with hate in their eyes.

“I was called a nigger and cunt. They pushed and shoved me. They were disgusting and dangerous.” – Shiya Nwanguma pic.twitter.com/Iz6HhLc3TO

Shortly after the videos were posted online, reporter and activist Shaun King and others went to work to try to identify the various men who assaulted Shiya. What he and others found out about the assaulters was astounding.  Many of them were part of white supremacist and neo-nazi groups who had assembled at the Trump rally for this specific reason. One was banned from the U.K. for his involvement in hate groups. Another, a young man was denied enlistment into the US Marines once his involvement was discovered. You can read more about the specifics of the men involved here.

This is the state of our nation. Whether the Republican party wants him or not, Trump is the face of conservatism in America. Our entire nation is in grave danger, particularly minority groups as Trump has focused his vitriol on them the most. We can only hope that America wakes up from this fascist nightmare soon.

Young Black woman repeatedly assaulted at a Donald Trump rallyUPDATE (5am): We have now determined that many of the men assaulting this young girl, a teenager, are open white supremacists who have been clearly idenfitied members of hate groups and Neo-Nazi organizations. Full story @: http://nydn.us/1T7vFgh—–Excuse my language, but I am fucking furious. Blood boiling. This is in Louisville at an official Donald Trump rally. This young peaceful Black woman, reportedly a teenager, is shoved and pushed and repeatedly assaulted by grown white men at a Donald J. Trump rally. Police looked on as this happened. White women, like they did with Little Rock 9 and others, screamed in her face with hate in their eyes. Men cussed her out and yelled right in her face as they pushed her to and fro and repeatedly put their hands on her.