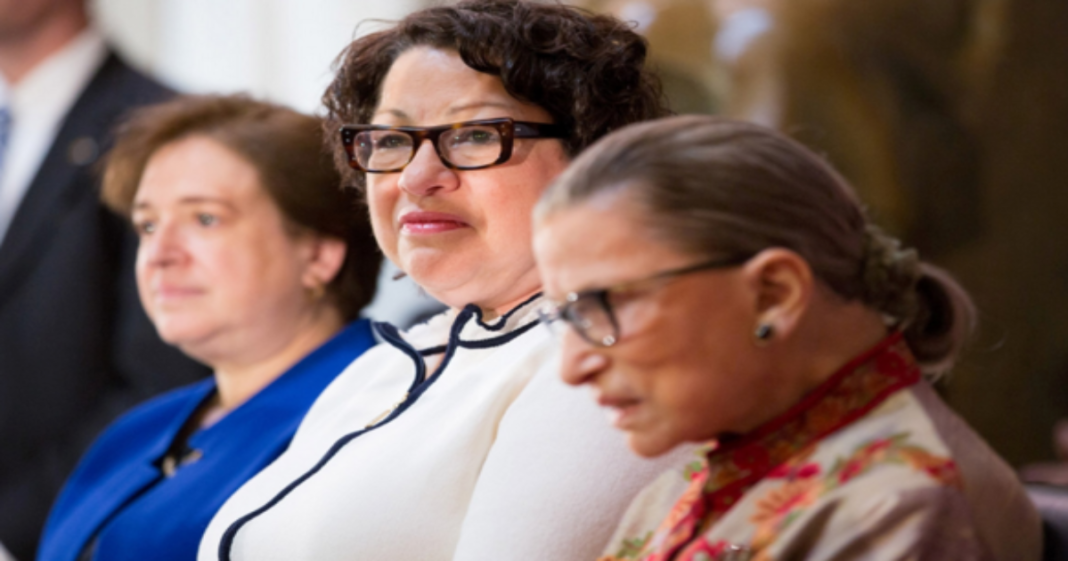 Often times when people talk about creating a more equal representation of gender and race in positions of authority, many wonder what the real importance of that sort of change could be. Some figure that electing women and minority figures is just a token effort, something that is a bit too “politically correct” and ineffectual.

Now that the current number of supreme court justices has been reduced to eight, and with the loss of a loud conservative voice, the courts saw an unprecedented level of woman power as the three female judges fought tooth and nail to protect women’s reproductive rights this week.

And this wasn’t just some “girl’s gotta stick together” nonsense – this was three wildly intelligent women closely scrutinizing the case and pushing back at what they saw as a falsely paternalistic attitude which used the guise of protecting women to oppress them.

The case that the Supreme Court took was Whole Woman’s Health vs. Hellerstedt, a case on a recent Texas law which would place unprecedented regulations on abortion clinics, making it almost impossible for women to obtain safe abortions despite the fact that the Supreme Court had protected that right decades ago. Particular language in Roe v. Wade made it so that no law restricting abortion must place an “undue burden” on women seeking them, which is what this case is arguing.

Justices Elana Kagan, Ruth Bader Ginsburg and Sonia Sotomayor put forward question after question, not content to allow the men in the room to decide what is best for women in the country.

Slate reporter Dahlia Lithwick was present during the case and her commentary illustrates just how amazing, badass, and important this case and the women who oversaw it are:

“It felt as if, for the first time in history, the gender playing field at the high court was finally leveled, and as a consequence the court’s female justices were emboldened to just ignore the rules. Time limits were flouted to such a degree that Chief Justice John Roberts pretty much gave up enforcing them. I counted two instances in which Roberts tried to get advocates to wrap up as Justices Ruth Bader Ginsburg and Sonia Sotomayor simply blew past him with more questions. There was something wonderful and symbolic about Roberts losing almost complete control over the court’s indignant women, who are just not inclined to play nice anymore.

Ginsburg begins by asking Keller how many Texas women live more than 100 miles from an abortion clinic. When he tells her that women in El Paso can hop over the border to New Mexico, she stops him short. “That’s odd,” she muses, “that you point to the New Mexico facility. New Mexico doesn’t have any surgical ASC requirement, and it doesn’t have any admitting requirement. So if your argument is right, then New Mexico is not an available way out for Texas because Texas says to protect our women, we need these things.” (This is where I want to call up each of the men who demanded that Ginsburg retire in 2014 and just smile, and smile, and smile.)

Sotomyor tags in: “According to you, the slightest health improvement is enough to impose on hundreds of thousands of women.­­ Even assuming I accept your argument, which I don’t, necessarily, because it’s being challenged, but the slightest benefit is enough to burden the lives of a million women. That’s your point?”

Keller says complications. Kagan says that liposuction actually has greater complications. . . Sotomayor says colonoscopies have more complications. Finally, Keller says, “But legislatures react to topics that are of public concern.” And that is what matters. Not women’s health. Politics.

Looming over most of the morning, of course, is Justice Scalia, who is three times larger in his absence than even his outsize presence used to be. Scalia, recall, once referred to clinics in an opinion announcement as “abortion mills.” Justice Alito seems exhausted trying to play both his own part, and Scalia’s, and Justice Clarence Thomas, silent today, chatters and laughs with Breyer. One senses that the chief justice, two weeks into this new post-Scalia era, is worn out just trying to keep the women at bay. And with today’s facts in hand, the pugilistic culture warrior Scalia would have been incomparable. Without him on the bench, the court’s conservative wing is reduced to demanding more and more proof that the closure of 11 clinics on the day HB 2 passed was really a result of the law. This is, as Scalia would never say, weak applesauce.

If the case is sent back to Texas on remand, we will play this out again in a few years with nine justices. But it’s hard to imagine President Obama conjuring up, from even the darkest, most devious underground lab, a new justice who would be half as fierce as the four-car train of whoop ass we saw today.”

I highly recommend that you read Lithwick’s entire story at Slate.

This is why equal representation matters.