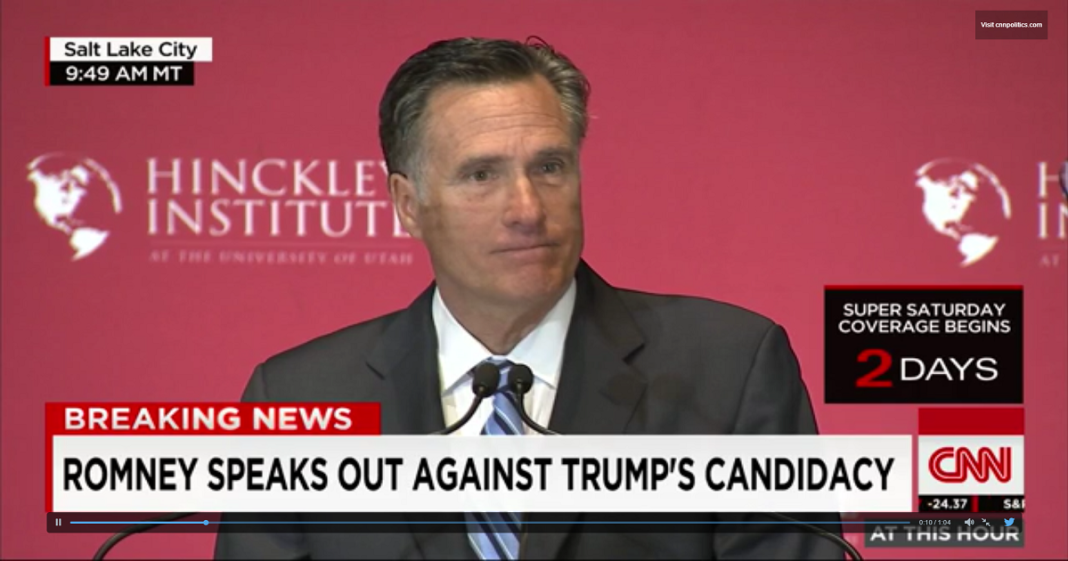 When former presidential candidate Mitt Romney announced that he would be making a speech on Thursday morning, most knew it would not be any sort of Trump endorsement. But what we didn’t know is just how strongly Romney would oppose Trump or just how clearly it would be made that the Republican establishment is taking it’s final breath.

Romney spoke in Salt Lake City, Utah, and appealed to voters who had not yet cast their ballots, begging them to go with anyone but Trump.

“Let me put it very plainly, if we Republicans choose Donald Trump as our nominee, the prospects for a safe and prosperous future are greatly diminished.”

Romney pointed to Trump’s dangerous rhetoric and what it has already done to harm foreign relations in the U.S..

Then, Romney declared that Trump lacks the temperament to be president based on his vulgar speech and personal attacks against political foes. Romney even referred to Trump as “evil.”

.@MittRomney: @realDonaldTrump “lacks the temperament to be president” https://t.co/XtexGjG9PC https://t.co/iAX6BZn0E5

Finally, Romney called upon Trump to release his tax returns and the off-the-record video with the New York Times so that the American people may have the full picture of their beloved candidate. Romney called upon Americans to make this extremely important decision, almost begging them to save the Republican party.

.@MittRomney: @realDonaldTrump is “playing the members of the American public for suckers” https://t.co/XtexGjG9PC https://t.co/TXkSQdhM2P