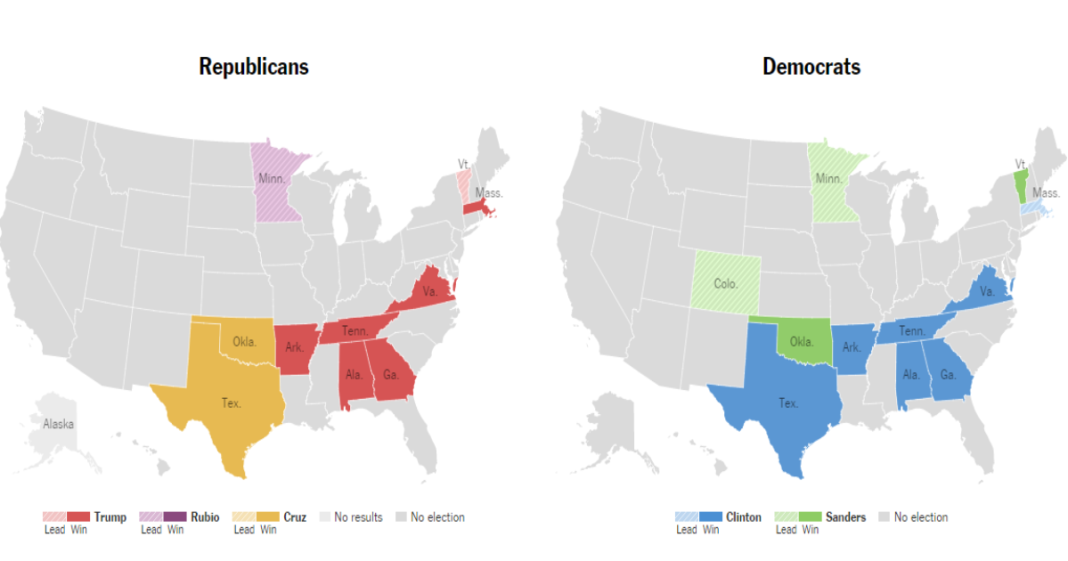 Super Tuesday was hailed as an extremely important moment in the 2016 political race as primary races in both parties have remained incredibly competitive. As results began to roll in Tuesday evening, there was a strong immediate showing for frontrunners Hillary Clinton and Donald Trump.

Hillary Clinton has taken Alabama, Arkansas, Georgia, Tennessee, Texas and Virginia. Clinton leads by a slim margin in Massachusetts. Clinton has had a strong showing on this Super Tuesday and will find herself with a comfortable delegate lead heading into the remainder of the race. Clinton’s Texas win is a significant part of that lead. Clinton’s success in southern states is further proof that she is enjoying a strong lead among African American voters.

Bernie Sanders has won Oklahoma and his home state of Vermont and is leading in Minnesota and Colorado. Sanders found himself in a close running in several states with Clinton, though minority-heavy southern states were clearly not in his corner. This block of voters is a vital one and Sanders must do more to earn their vote if he hopes to make it to the general.

Donald Trump has won Alabama, Arkansas, Georgia, Massachusetts, Tennessee, and Virginia. He also leads in Vermont. From the time that the first poll on Tuesday closed, Trump rocketed to the front of the race and never left. Republicans all over the nation are apparently giving a resounding “yes” to possibly the most dangerous candidate to have entered American politics in recent memory. Trump’s victory speech indicated a new general-focused tone and brought up new talking points about the middle class and income. Trump has proven himself to be a sinister political chameleon and Democrats would do well to be extremely wary and realistic about the likelihood of a Trump nominee.

Ted Cruz has won Oklahoma and Texas. Many had said that if Cruz failed to win his home state of Texas that the candidate would be through in the race, so this victory means that we will have to deal with more of the slimy character. Trump’s success on this Tuesday was so dominating that it almost made everyone feel relief when Cruz finally won a couple of states. Cruz’s Texas win is significant and earns him a great deal of delegates.

Marco Rubio is leading in Minnesota. Rubio is being hailed as the biggest loser on Super Tuesday as many had hoped that his newly adopted offensive attitude toward the Republican frontrunner would pay off. It appears instead that Rubio’s dirtier tactics may have cost him more than it helped him as the candidate has failed to garner any important states like Virginia where many pundits had predicted he would win.

Neither John Kasich nor Ben Carson have won any states. Kasich is close behind Trump in Vermont, though results are skewing in Trump’s favor. Carson’s strongest showing was in Alabama where he won a whopping 10 percent.

The only state unreported is Alaska whose results will not come in until 1 a.m..

It was certainly not the results many were hoping as Trump’s momentum was not dampened but rather bolstered to new heights. Both Democrats and Republicans alike are mourning tonight.