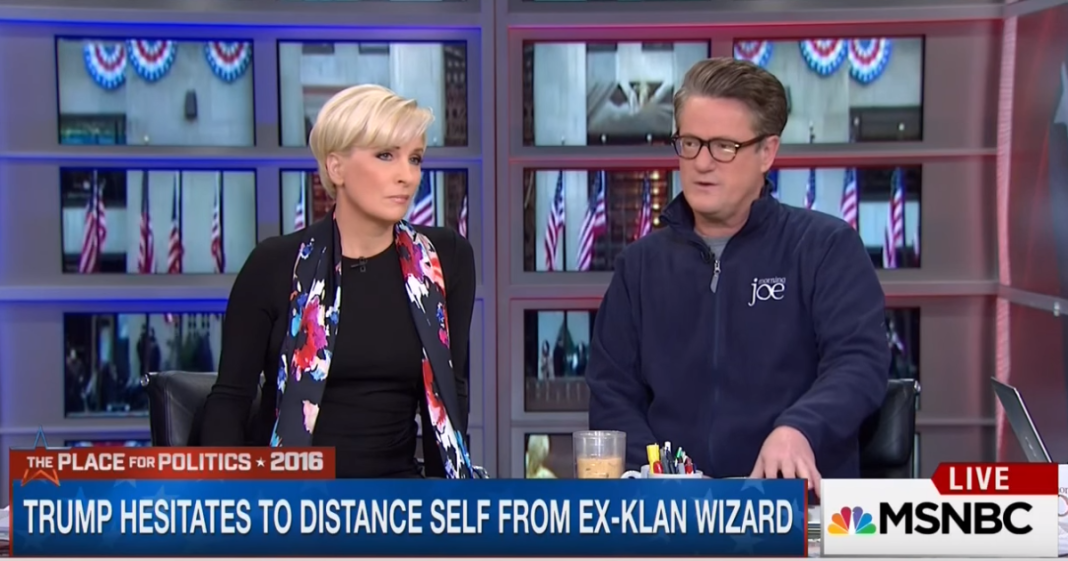 Welcome to the party, Y’all!

MSNBC, though they have been trying their best to avoid criticizing Trump or even asking him a difficult question, was forced to admit on Sunday that their candidate is a disgusting, vile man who isn’t fit to clean toilets (I am sure the people who clean toilets are decent, respectable people and don’t deserve to be lumped in with such an idiot).

Though “Morning Joe” hosts Joe Scarborough and Mika Brzezinski have been some of Trump’s biggest fans in this election cycle, spurring a great deal of controversy from people inside the network who were uncomfortable with how cozy Joe and Trump seemed to have become, Trump’s recent antics appear to have gone just a bit too far.

“That’s disqualifying right there. It’s breathtaking. That is disqualifying right there. To say you don’t know about the Ku Klux Klan? You don’t know about David Duke? And the most stunning thing is … this isn’t buying him a single vote. Is he really so stupid that he think southerners aren’t offended by the Ku Klux Klan and David Duke?”

Of course, the rest of us were saying that back when Trump insinuated that Mexican immigrants were rapists and murderers, and then again when he suggested that we bar an entire religion from entering the country. In fact, there’s been a hundred times when Trump has suggested things that are not only immoral but illegal and unconstitutional.

It’s heartwarming to see that somewhere deep down, “Morning Joe” does have a line, and Trump has finally crossed it. Now, when is the next all-Trump MSNBC town hall?