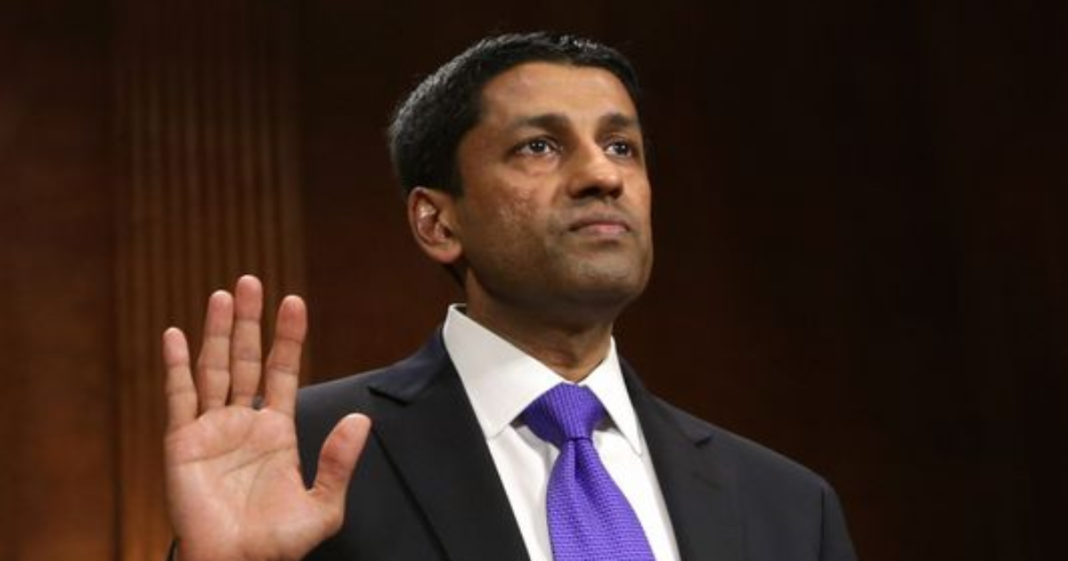 By all reports, Sri Srinivasan – all of 48 years young – is a “wunderkind,” a brilliant legal mind one sees perhaps two or three times in a generation. Currently a U.S. Circuit Judge for the Washington D.C. District Court of Appeals, Srinivasan is at the top of President Obama’s “short list” of potential replacements for late Supreme Court Justice Antonin Scalia.

The burning question for Progressives hoping for a shift in the balance of the Supreme Court is: who is Sri Srinivasan?

Born in the Punjab State capitol of Chandigarh, Srinivasan immigrated from India with his family when he was a young child. His parents worked at the University of Kansas where his father was a mathematics professor and his mother was employed in the computer science department. Sri earned both an MBA and his law degree at Stanford. He began his legal career as a law clerk for Judge J. Harvie Wilkerson III, then went on to work for former Supreme Court Justice Sandra Day O’Connor, the first woman ever to serve in that capacity (Ms. O’Connor retired in 2006).

Srinivasan has spent part of his career working at O’Melveny & Myers (OM&M). That venerable organization, founded in 1885 and based in L.A., is one of the largest law firms in the world. OM&M has represented high-profile corporate clients that include Bank of America, Exxon-Mobil, Goldman-Sachs and Metro-Goldwyn-Mayer. The firm specializes in anti-trust cases, capital markets and corporate law – including class-action defense and appeals. In 2010, Srinivasan himself represented former Enron CEO Jeffery Skilling while he faced charges of fraud and conspiracy. Srinivasan served as counsel to Exxon-Mobil in a lawsuit over human rights abuses in Indonesia (the case is ongoing). He also worked on behalf mining company Rio Tinto in a similar case involving its operations in New Guinea.

Should this be of concern? Does Srinivasan’s tenure and experience at a law firm known for defending corporate clients suggest that Obama will nominate yet another corporatist to the Supreme Court?

Perhaps – or perhaps not. Srinivasan also did pro-bono work on behalf of former Presidential candidate Al Gore in the wake of the debacle that was the “election” of 2000. Srinivasan also worked for the Bush Administration as part of the U.S. Solicitor’s office. He has drawn fire from organized labor for defending corporate clients in the past.

Srinivasan appears to have a mixed record on progressive issues. Last year, he wrote the opinion on Pom Wonderful v. FTC, upholding a lower court ruling requiring that company claims regarding health products be backed up by “competent and reliable scientific evidence.” At the same time however, the appellate court reduced the number of required studies and lowered the standards for such studies. Srinivasan also wrote the decision in Home Care Association of America v. Weil, which restored regulations guaranteeing overtime and wage protections for home health care workers. On the other hand, in Hodge v. Talkin, Srinivasan and his colleagues upheld a federal law blocking demonstrators from holding protests on the grounds of the U.S. Supreme Court Building. The Court’s reasoning: allowing such demonstrations might give the appearance that the Supreme Court was being influenced by public opinion. Demonstrators are still allowed to hold protests on the street, however.

Srinivasan recently ruled in favor of Holocaust survivors in Simon v. Republic of Hungary. In that case, Srinivasan and his colleagues ruled that terms of the 1947 treaty officially ending hostilities between Hungary – one of the Axis Powers during World War II – and the Allies could not shield the Hungarian government from litigation brought by private individuals and their survivors over their treatment. At present, Srinivasan is scheduled to hear the latest challenge to Net Neutrality. How he would rule on this case is anyone’s guess.

Srinivasan’s views on social “wedge” issues are not entirely clear. In 2013 however, he was part of the legal team that presented arguments before the Supreme Court against the “Defense of Marriage Act.” That law was successfully repealed, which opened the way for the legalization of same-sex marriage throughout the U.S.

While it is true that lawyers do not always have a choice about the cases they work on or the clients they represent, the fact that Srinivasan is known to have worked on a number of controversial cases on behalf of corporate interests remains troubling to progressives. He may be liberal on social issues, as suggested by his work in the repeal of DOMA, but even the current Supreme Court has come down on the side of same-sex marriage. The major problem with the Roberts Court has been its strong tendency to rule in favor of moneyed interests and protect the rights of “corporate people” over those of natural humans. Those rulings have invariably been 5-4. Now that Justice Scalia has passed on, President Obama has an opportunity to nominate someone who will tip the balance in the other direction, changing the makeup of the SCOTUS in a way that will provide greater protections for consumers, for working people and the “ordinary” citizens who are the 98 percent.

Instead, President Obama has displayed a tendency to nominate candidates with significant ties to Corporate America, as shown by his recent choice for head of the Food and Drug Administration as well as his nomination of corporate trial lawyer Eric Holder for U.S. Attorney General. Between that and Srinivasan’s track record of defending corporate interests, progressives have real cause to question Obama’s choice.