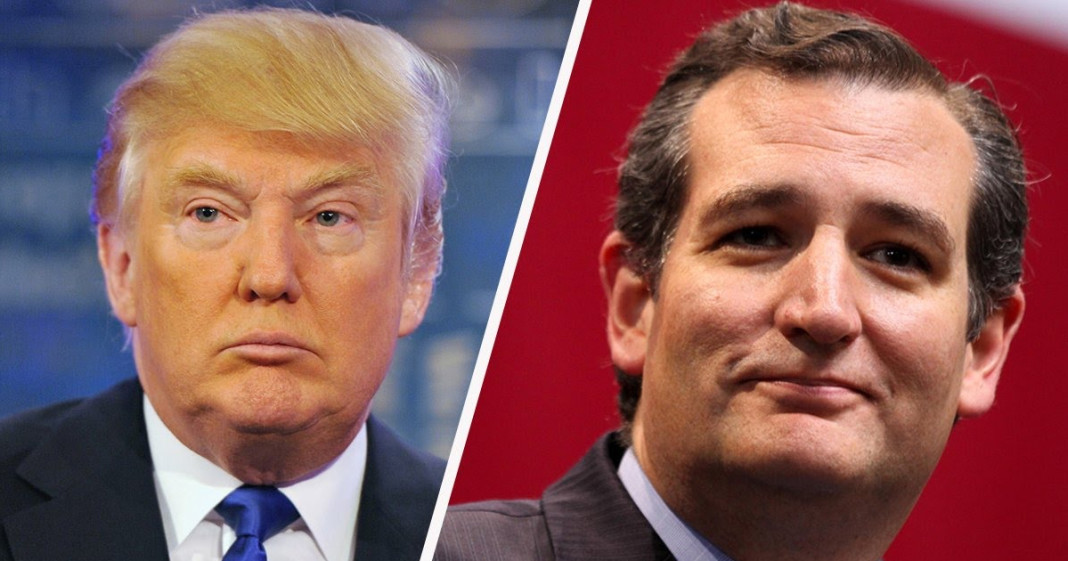 While Progressives are celebrating Bernie Sanders’ spectacular showing in Iowa, the GOP has less to be happy about – and an impending general election showdown with Bernie is not the least of it. Ted Cruz, the theocratic moonbat whose eligibility to hold Presidential office is highly questionable on Constitutional grounds, has come out on top for the Republican nomination, winning 28% of the vote. Cruz managed to pull this off despite the fact that he is liked among Establishment Republicans even less than Donald Trump, who came in a distant second with 24%. Granted, the race between the two right-wing populists has been tightening over the past several weeks. Still given Trump’s popularity and celebrity status, along with his appeals to the lowest common denominator, it’s worth looking into just how Cruz managed to pull it off.

Cruz’ theocratic leanings explain a great deal of it. Taking a page from the same playbook used by Huckabee and Santorum, Cruz made a direct appeal to Iowa’s Christian  evangelicals. Those members of the Religious Right represent as much as 60% of the GOP voters attending the caucus. Of course, Trump and third-place winner Marco Rubio have been going after that contingent of voters as well – but in the end, it was Cruz who won their hearts. A record voter turnout didn’t hurt him in that regard.

Cruz definitely knows the evangelicals’ language. In a recent conference call with campaign volunteers, Cruz said, “If we awaken and energize the body of Christ– if Christians and people of faith come out and vote our values– we will win and we will turn the country around.”  He has been courting conservative Christians for some time; he admonishes his followers to “pray each and every day” until Election Day, and recently declared that the time has come to “awaken the body of Christ that we may pull back from the abyss.” Cruz has been working with members of the clergy in all of Iowa’s counties, creating a network of pastors to organize and motivate their colleagues and congregations. He’s working that same strategy in South Carolina. Cruz announced, “I want to tell everyone to get ready, strap on the full armor of God, get ready for the attacks that are coming.”

Such rhetoric should be of great concern to Americans who believe in the separation of Church and State.

Courting the evangelical electorate wasn’t all that propelled Cruz to his victory in Iowa, nor is it his sole strategy for securing the GOP nomination.  One of his campaign memes has been unity among conservatives: “If conservatives unite, we win . . . in past elections, what Washington’s tried to do was divide and splinter conservatives, and what we’re seeing is, conservatives are uniting.” Toward that end, he has also been courting moderate Republicans, the Tea Party who sent him to Congress in the first place, and the Rand Paul libertarians, for whom he has been developing some appeal.

And what of Cruz’ unpopularity among his Senate colleagues, due to his inflexibility and refusal to negotiate and engage in compromise? He boasts of burning the proverbial bridges with his fellow lawmakers, and wears his lack of support among the GOP Establishment as a badge of honor. In this, he’s taking a tip from Trump, proudly presenting himself as an outsider: “I kind of thought that was the whole point of the campaign!”

Besides that, while Trump has simply been opening his mouth and letting whatever comes out to be his message while relying on his celebrity and name recognition to carry him, Cruz has been extremely calculating and organized. The Cruz campaign machine, for better or worse, has been carefully constructed and is carrying out its mission like a well-oiled, precision machine. To use another metaphor, Trump’s campaign approach has been the broadsword and battle axe – while Cruz employs the rapier and the parrying dagger.

This is all well and good for Cruz as he faces the caucuses and primaries to come. But should Cruz win the GOP nomination, will his strategies carry him to the White House? The most recent polls from CNN and ABC indicate that, should theocratic right-winger Cruz wind up facing Progressive champion and statesman Bernie Sanders in the general election, Sanders will win by a comfortable margin.