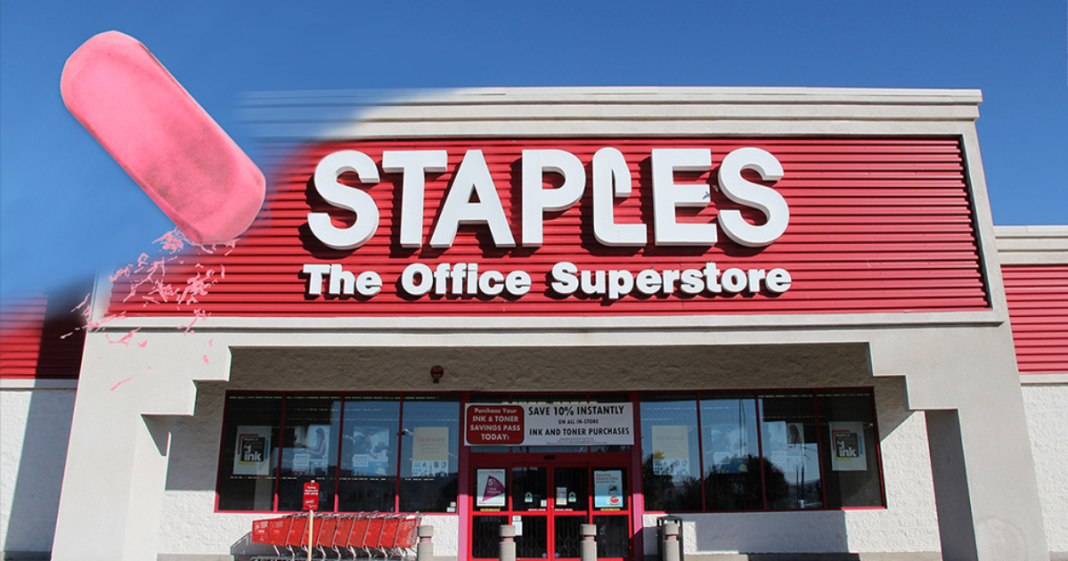 Office supply chain Staples, which opened its first store in 1986, is in decline. After two years of closing stores across the country, the ongoing job cuts are now hitting company headquarters in Framingham, Massachusetts. In what one source describes as a “bloodbath,” layoffs will affect hundreds of employees – but CEO Ron Sargent’s job is (naturally) secure.

Sargent, who has given a pink slip to the company’s North American retail chief and 30-year executive Demos Parneros, calls it “streamlining” the organization. Parneros’ job will be incorporated into the duties of  Staples’ Business-to-Business department head, Shira Goodman, who has held various executive jobs at the company for the past 23 years.

The corporate bloodletting at Staples is indicative of failed expectations that the office supply retailer’s proposed merger with Office Depot would be approved by the Federal Trade Commission. Last year, Staples announced its planned takeover of Office Depot. However, the FTC has blocked the merger twice, citing that such a deal would seriously reduce competition in the industry. Although negotiations continue and a final hearing on the merger is scheduled for March, an unnamed source in the New York Post says that the likelihood of the merger being approved is “near zero.”

Another problem is that the entire office supply industry is becoming a victim of its own success. Staples now faces stiff competition from big box stores such as Wal-Mart and Costco as well as on-line retailers like Amazon.  Furthermore, many of the products that were the mainstay of office supply stores are becoming obsolete as business increasingly goes “paperless.”

Ironically, Staples remains profitable – company stock is up slightly as of this writing – but there is yet another issue, which Motley Fool describes as a “ticking time bomb” on the company ledger. Last year, Staples acquired PNI Digital Media, a third-party photo processing service for many major retail stores, including Wal-Mart and Costco. This past September, hackers made their way into the company’s database – which contains detailed customer account and credit card information. The security breach was eventually repaired, but in October, PNI was targeted in a class-action lawsuit.

The Staples story is part of a larger trend of endless mergers and acquisitions in which corporate “people” take on lives of their own – lives which are apparently more valuable than those of natural people, who lose their livelihoods as well as control of their private information, their choices, and more. In 1903, a game designer and progressive economist named Elizabeth J. Philips invented a board game, which she called “The Landlord’s Game.” This game was intended to help people understand the consequences of the concentration of wealth into fewer and fewer hands. Eventually, the Landlord’s Game evolved into the popular board game known as Monopoly.

Today, Staples and other large corporations that continue to swallow each other up illustrate the veracity of Thom Hartmann’s assertion, first made in 2008, that “capitalism has reached the cancer stage.” In theory, cancer cells are immortal, and indeed, would be – except for the fact that they ultimately kill their hosts.

It’s a lesson that Staples, Inc. is learning the hard way. 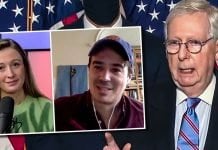 No One Is Buying The Republicans’ Deficit Fearmongering Anymore