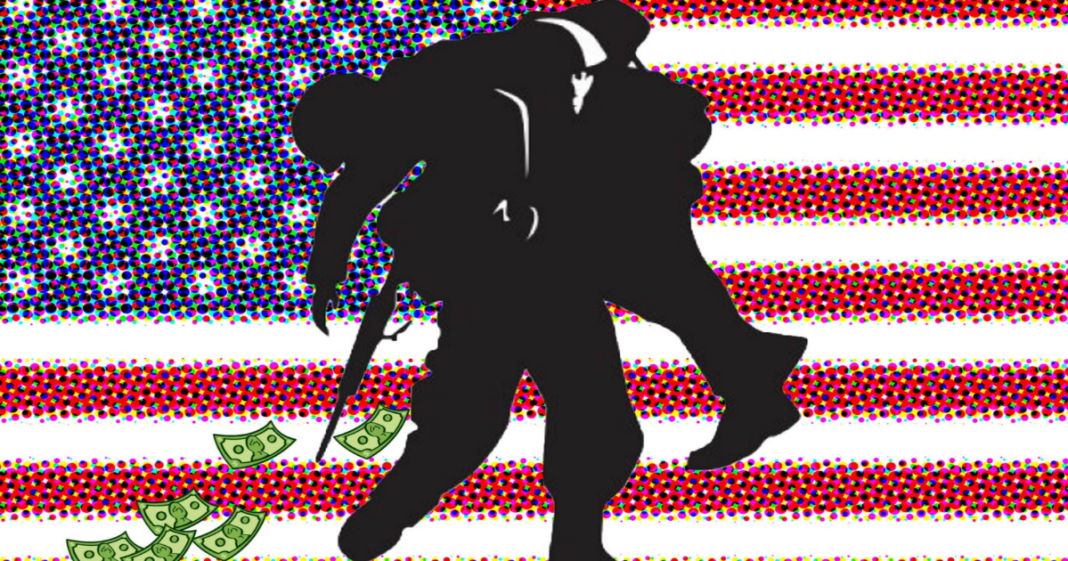 A recent CBS News investigation reveals that the Wounded Warrior Project (WWP), a favorite charity among prominent celebrities including Donald Trump, spends only 60 cents out of every dollar on actual services for injured and disabled veterans. In 2014, generous Americans of all stripes donated over $300 million the non-profit organization on behalf of returning servicemen and women suffering from battle-related injuries, both physical and psychological. Yet, only $180 million went towards veteran care.

According to former Army Staff Sergeant Erick Millette, it went toward lavish executive and staff salaries and equally lavish parties, as well as getaways at ritzy hotels and resorts and gourmet meals in five-star restaurants. He accuses WWP of “using our injuries, our darkest days, our hardships, to make money.”

Millette himself is a veteran of the Iraq War, where he suffered a traumatic brain injury and PTSD. As a participant and beneficiary of WWP programs, he eventually went to work for the organization as a spokesman.  Within two years, he became disillusioned with what can only be described as a gross misappropriation of funds. Millette points out that “Going to a nice fancy restaurant [and] staying at a lavish hotel at the beach…requiring staff that lives in the area to stay at the hotel is not team building.”

Unfortunately, that is exactly what has been going on. One former employee described a recent WWP event as “extremely extravagant…what the military calls fraud, waste and abuse.”

It wasn’t always that way. In 2010, the organization spent $1.7 million on conferences, training and team building. That was the year after Steven Nardizzi took over as the organization’s CEO.  Within five years, that figure had ballooned to $26 million. That is approximately as much as WWP spends on its flagship PTSD treatment program. A single four-day conference in 2014 – held at a five-star luxury resort in Colorado Springs – cost a whopping $3 million. Another former WWP staff member described some of Nardizzi’s antics at such events: “He rappelled down the side of a building …he’s come in on a Segway, he’s come in on a horse.”

Although CBS News presented this story on Tuesday, the controversy surrounding WWP’s use of funds is not new – and the story goes a lot deeper. Last summer, The Daily Beast reported that Nardizzi’s own annual salary went up by nearly $100,000 in 2014, rising from $375,00  to over $473,000. Salaries for WWP’s top 10 executives totaled $2.6 million. On top of that, WWP made over $1 million by selling donors’ personal information to third parties. In an article on LinkedIn.com, Nardizzi defended the practice, claiming that the organization was sharing “nothing more than names and addresses – information that is readily available online.” In 2013, the Tampa Bay Times reported that WWP had spend only 58% of donations on actual veterans’ programs.

WWP also has a vindictive streak. The organization has brought legal action against its critics on three occasions over the past two years, including disabled USAF veteran Gordon Graham, whose blog posts were critical of its policies. That lawsuit alleged that Graham, who labeled WWP as a “scam,” was hurting its fund raising efforts by “creating an aura of suspicion around its work.” Earlier, WWP brought suit against another disabled veteran in Indiana for defamation. The defendant in that case, Dean Graham (no relation to Gordon) said that “WWP is a fraud…that needs to be investigated immediately.” He also pointed out that WWP retains “an army of lawyers…to punish all those who try to expose it.” The court found in favor of the plaintiff, ordering Graham to retract all of his statements and issue a formal apology.

WWP’s legal staff may have been able to intimidate individuals, but they are unlikely to be able to take on a major media corporation. The recent CBS News report appears to have blown the proverbial lid off this long-running story once and for all. As William Shakespeare wrote more than 400 years ago in Merchant of Venice, “at the length, truth will out” – and truth is a defense that not even the slickest corporate trial lawyer can overcome.