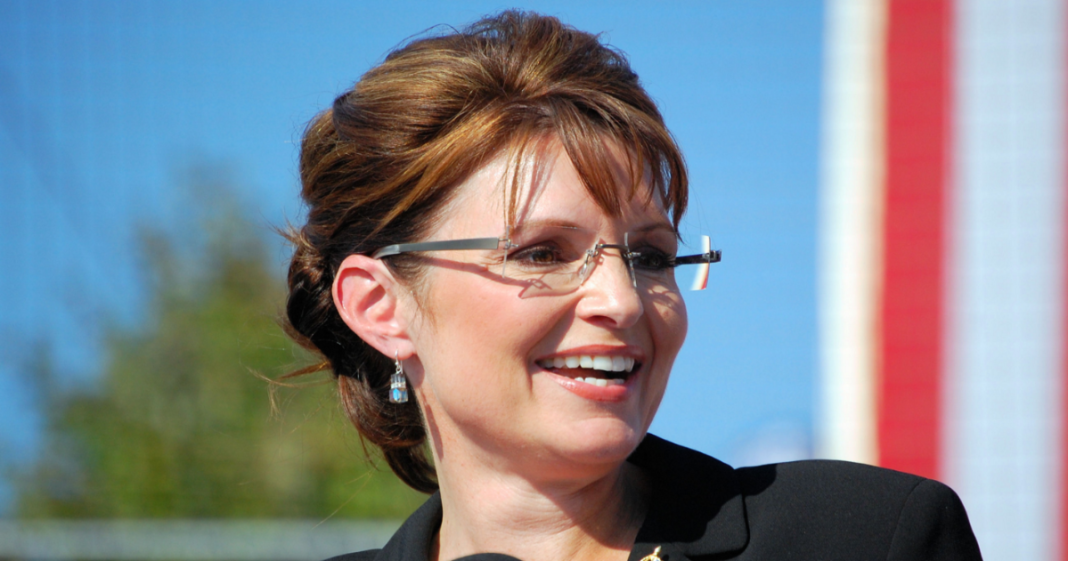 It is not our idea of good journalism to use Palin’s son’s domestic abuse charges as fodder against the failed governor, but when she chose to address it in a campaign speech for Donald Trump, politicizing his crimes as some sort of result of PTSD and a failed Commander in Chief, it becomes necessary to correct and comment on what she has to say.

Palin had this to say about her son’s violent actions against his girlfriend last week:

“I can talk personally about this, I guess it’s kind of the elephant in the room. My son like so many others, they come back a bit different, they come back hardened, they come back wondering if there is that respect for what it is that their fellow soldiers and airmen and every other member of the military so sacrificially(sic) have given to this country. And that starts from the top. It’s a shame that our military personnel even have to wonder, if they have to question, if they’re respected anymore. It starts from the top. The question though that comes from our own president where they have to look at him and wonder, do you know what we go through? Do you know what we’re trying to do to secure America and to secure the freedoms that have been bequeathed us?

“I can certainly relate with other families who kind of feel these ramifications of some PTSD and some of the woundedness(sic) that our soldiers do return with. And it makes me realize more than ever it is now or never for the sake of Americas finest that we have that commander in chief that will respect them and honor them.”

One might assume from that rousing support for veterans that Track Palin served a couple of duties in Iraq, dodging bullets and returning enemy fire. What his public records really show is that the violent Palin child never saw a moment of combat during his year serving in Iraq during the Bush administration.

A fellow soldier said, “Speaking as a combat vet who literally slept in the same barracks as Track Palin, his mother is wrong and her son is not a victim.”

The White House has also officially responded to Palin’s comments, condemning Palin for her flippant politicization of a serious mental health issue.

The truth of the matter is that Sarah Palin’s son Track is a violent criminal who brutally beat his girlfriend, and Sarah Palin, rather than feeling shame for what her son had done, instead lied about it and tried to make it Obama’s fault. No, Sarah, when you raise violent criminals, it is your fault, not Obama’s, when they act violently.

Watch our commentary on this: