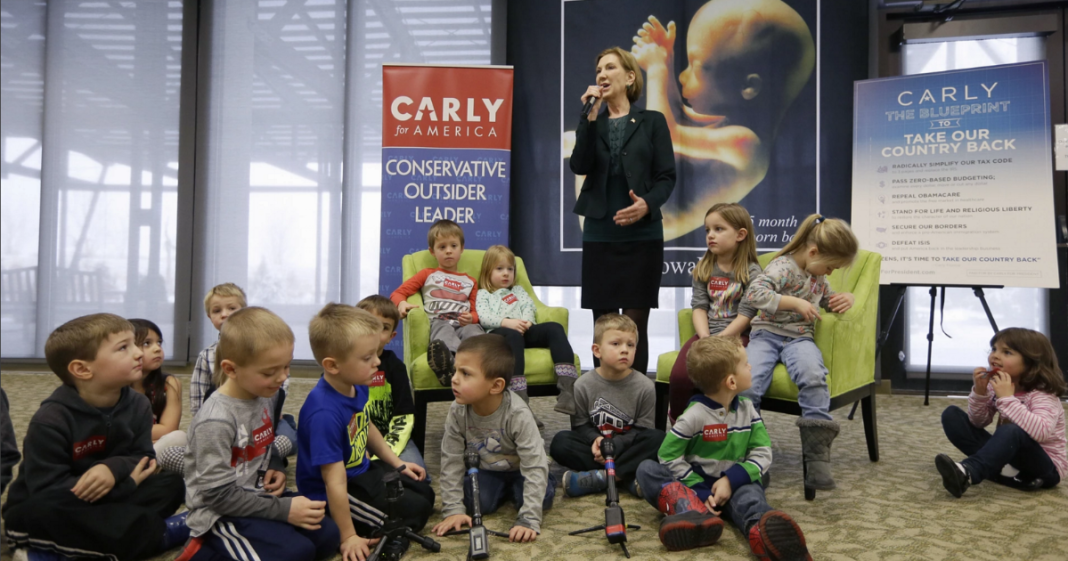 On Wednesday, Republican Candidate Carly Fiorina held a pro-life propaganda event at the Des Moines botanical gardens surrounded by small children as a real life metaphor for the precious lives she imagined she was fighting for.

While the use of children at the event was a clear example of creepy emotional manipulation, it turns out that it was also a near-kidnapping as well.

The group of children perched at Fiorina’s feet were not there by the consent of their parents; rather, they had been brought to the Botanical Gardens to see, you guessed it, the gardens! Fiorina had other plans and she swept them into her clutches to use them as unknowing and unwilling pawns in her emotionally manipulative political attack on women’s reproductive rights.

When some of the parents found out what extracurricular activities their tykes had spent their afternoon engaging in, they were pissed.

The kids went there to see the plants,” said Chris Beck, the father of four-year-old Chatham, one of the children Fiorina appeared with. “She ambushed my son’s field trip.”

“Taking them into a pro-life/abortion discussion [was] very poor taste and judgment,” Beck said. “I would not want my four-year-old going to that forum – he can’t fully comprehend that stuff. He likes dinosaurs, Teenage Mutant Ninja Turtles and Transformers.”

Clearly, the school which brought these children to the event should be held responsible as well. They may not have known that Fiorina would be at the gardens, but they certainly could have (and should have) prevented the children from participating in an event that has such close religious and political ties.

Fiorina needs to take a lesson from Trump and hire her creepy childhood plants from the “Freedom Kids” organization; at least those children are getting paid to sell their soul.