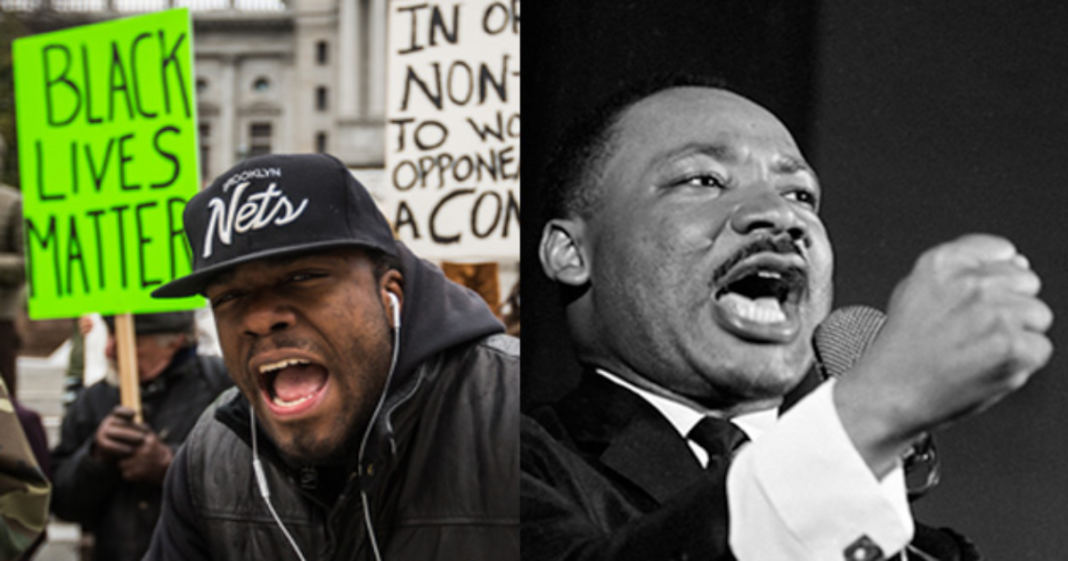 Earlier this week, 25 protesters of the Black Lives Matter movement blocked the busy Oakland-San Francisco Bay bridge right before rush hour – creating havoc that lasted for hours. The timing was no coincidence; the Anti-Police Terror Project posted a statement on the organization’s website, comparing the protest to “the radical legacy of Dr. Martin Luther King,” whose birthday was observed that day. Would he have approved of such an action?

Some well-meaning individuals among the white community question such comparisons – particularly those who were inconvenienced by the protest. One driver, who missed a memorial service because of the protesters, said, “They could put their energies into a lot more useful venues than sitting on a bridge and making everyone suffer.” Others have pointed out that Dr. King was one of the great pacifists of U.S. history, who spoke out against racial injustices in non-violent terms and discouraged the use of violence. He is remembered as the one who called for racial unity.

However, that is not the whole story. Dr. King was indeed a pacifist, but he and his followers were known to use and advocate for non-violent, confrontational disruption tactics. And, like recent BLM protests that virtually shut down Chicago’s busiest shopping district on the busiest shopping day of the year as well as the most recent demonstration, King drew serious criticism from his white supporters  Following his arrest in Birmingham, Alabama on April 12th, 1963, a group of liberal members of the clergy published an open letter in the local newspaper in which they said:

“We recognize the natural impatience of people who feel that their hopes are slow in being realized. But we are convinced that these demonstrations are unwise and untimely.”

That admonishment echoes similar criticisms made today, such as that made by former USA Today columnist Barbara Reynolds: “It’s hard for me to get behind Black Lives Matter. I support BLM’s cause, but not its approach.”  Even Minnesota Representative Keith Ellison – an African-American and a Muslim – said, “I’m 100% focused on [the] issues…not tactics” in reference to protests over the police killing of a black youth by Minneapolis police. Ellison stated that BLM protesters should be focusing on the court proceedings in the Jamar Clark case, not disrupting shoppers at a local mall. His statement is similar to what King’s supporters wrote in their open letter nearly 53 years ago:

“When rights are consistently denied, a cause should be pressed in the courts and negotiations among local leaders, and not in the streets.”

In response to such well-meaning advice from those who had never truly experienced injustice, Dr. King had this to say:

In a lecture made just a year before his assassination,  King said:

“There is nothing wrong with a traffic law which says you have to stop for a red light. But… when a man is bleeding to death, the ambulance goes through those red lights at top speed.”

Although the efforts he led resulted in passage of the Voting Rights Act, King understood that,

“…new laws are not enough…there is a fire raging now for the Negroes and the poor of this society. They are living in tragic conditions because of the terrible economic injustices that keep them locked in an ‘underclass’…Disinherited people from all over the world are bleeding to death from deep social and economic wounds. The need brigades of ambulance drivers who will have to ignore the red lights of the present system until the emergency is solved.”

A half-century later, the emergency continues – and the system continues to drag its heels, advising “incremental change” through law and the democratic process. Like Ralph Waldo Emerson and Mahatma Gandhi, Martin Luther King understood that such issues are too urgent, and the ongoing suffering is too great, to wait on a system that itself is often corrupt and compromised. It is something of which the Black Lives Matter movement and its allies are acutely aware. It calls for the type of action that has characterized the struggle for  justice throughout U.S. history, which Dr. King identified as

“Massive civil disobedience…a strategy for social social change which is at least as forceful as an ambulance with its sirens on full.”