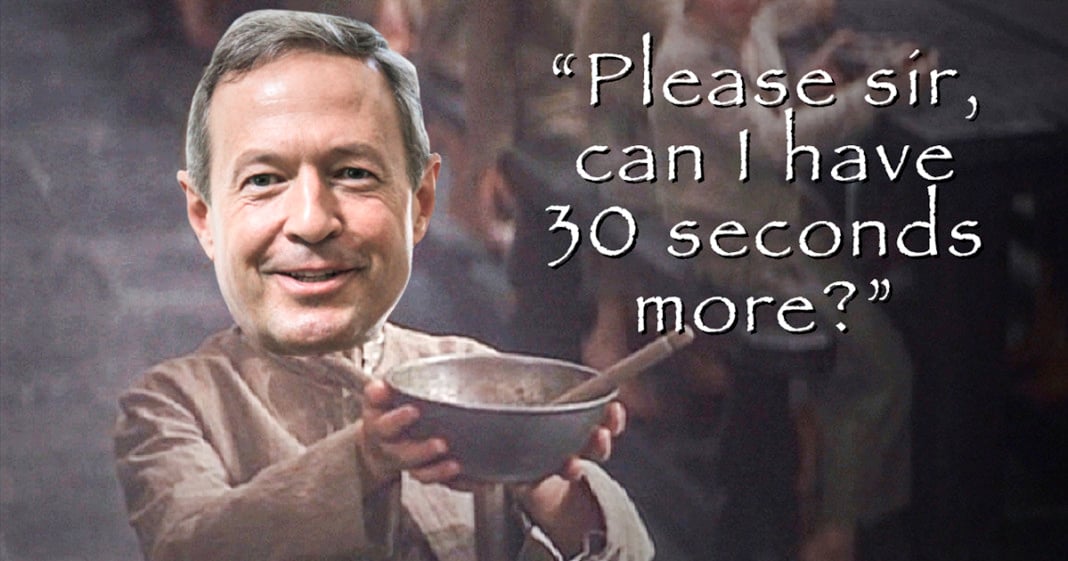 As the Iowa caucus and the beginning of the deciding primary races draw closer, the GOP continues to slowly narrow their candidates into a digestible number. As Republican candidates are whittled down, either by their own choice or the polling of the people, attention is occasionally drawn to the floundering Democratic candidate Martin O’Malley and his stubborn refusal to pack it in.

Of course, unless both Bernie Sanders and Hillary Clinton find themselves embroiled in some sort of career-ending scandal, losing everything, O’Malley has absolutely no chance; and yet he keeps plugging along like an under-loved and ignored stepchild.

At the most recent Democratic debate on Sunday, O’Malley pitifully begged for more talking time. When moderators designated 30 seconds to one of the more popular candidates, O’Malley interjected, asking gently,

“Can I get thirty seconds too?”

This got a big laugh from the audience, but they were crying pitying tears moments later when O’Malley begged again.

“Can I get my thirty seconds, please?”

O’Malley is certainly not the only candidate in this cycle to complain about the debate format, but he is the first to do so in such a sad and defeated way.

(By the way, if you’re wondering, he did not get his thirty seconds.)

In another heartbreaking moment during the debate, the moderator asked a question which O’Malley eagerly began to answer before he was told,

“That question was meant for Senator Sanders.”

As if to rub salt in his wounds, a new CNN/WMUR poll released on Tuesday which has Bernie Sanders leading New Hampshire like never before also features O’Malley leading in one specific category:

Martin O’Malley leads in one category: 26% of likely Dem primary voters in NH said they would not vote for him under any circumstances.

Yes, it seems like no matter what he does, O’Malley just can’t get ahead in this election. He is left to hang on with a sad two percent polling rate and is forced to beg for scraps of time from the bigger contenders.

Yes, Martin is our modern day Oliver Twist, and all the moderators can say is: