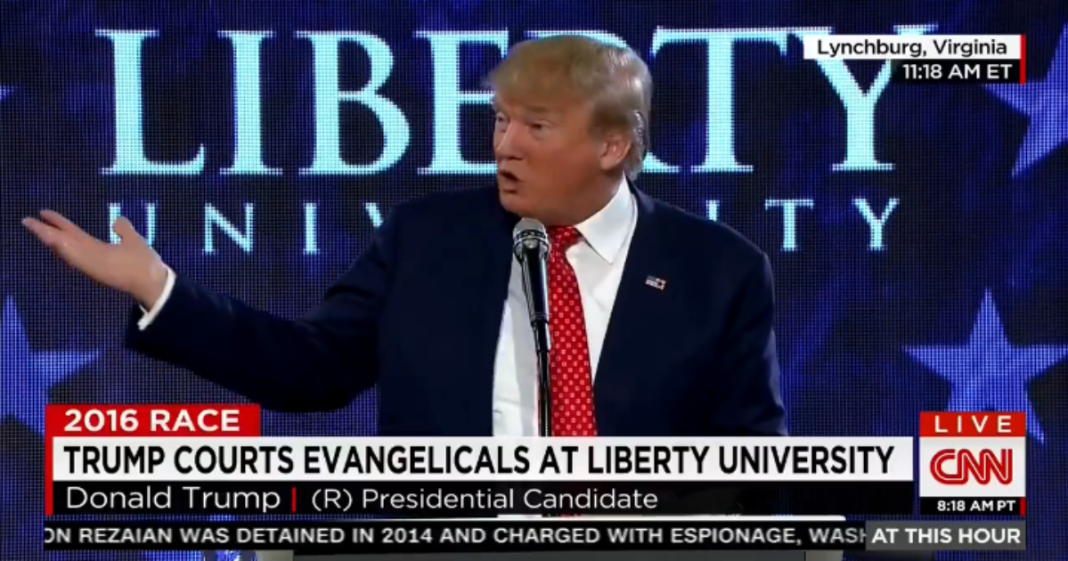 There’s no doubt that touting their Christian faith scores big points for GOP candidates, and the perpetually pandering Trump has been talking nonstop about his commitment to Christianity, declaring the Bible his “favorite book.” However, for a Bible lover, Trump made a pretty big mistake when quoting scripture at a campaign rally at Liberty University.

In addition to consistently referring to the Virginia Christian college as “Liberty University” Trump proved his religious rambling were, unsurprisingly, nothing but a tactic when he said,

“We’re going to protect Christianity. I can say that. I don’t have to be politically correct… Two Corinthians, 3:17, that’s the whole ballgame.”

Of course, what the supposedly devout candidate meant was Second Corinthians, however when reading a prepared speech for possibly the first time and lacking any real knowledge on the contents of his so-called “favorite book,” it’s a predictable mistake.

The verse he referenced reads like a Republican anthem, “Now the Lord is the Spirit, and where the Spirit of the Lord is, there is freedom,” and was garnished with Trump’s signature promise to keep things politically incorrect.

While a slip up like this should prove Trump’s deceitful misappropriation of religious ideals is nothing but a way to score votes with bible thumping conservative, GOP hopeful Marco Rubio’s faith outreach director addressed the event, hitting the nail on the head when he tweeted

“ ‘Two’ Corinthians… It won’t matter. Nothing seems to matter.”