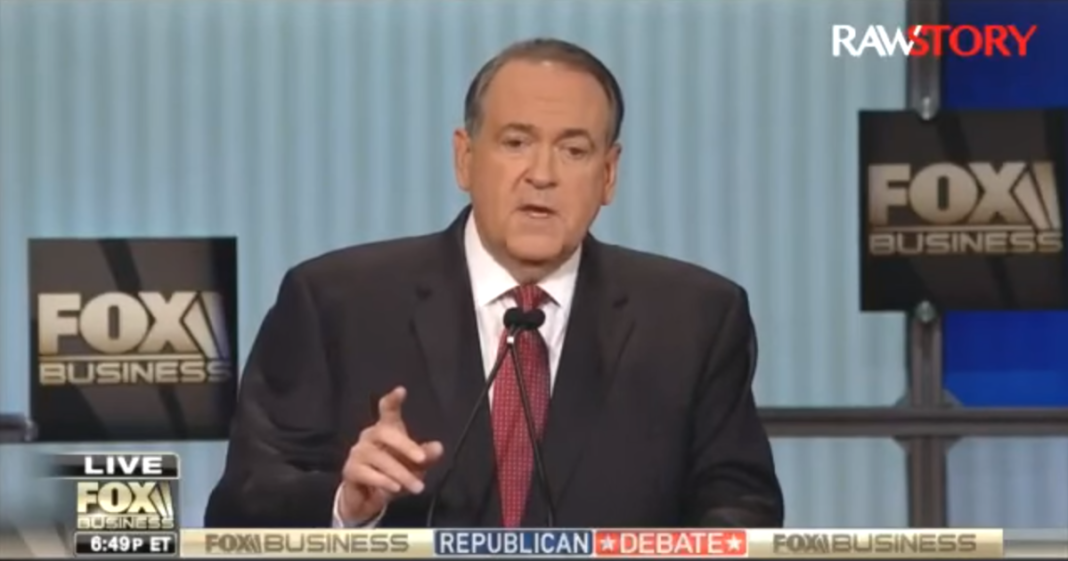 Mike Huckabee had quite an undercard debate Thursday night; not only did he pretty much call Obama a Muslim, he also suggested that the American government should treat poor people the way that Huckabee treats his dogs and children.

“If you work really hard and you start moving up the economic ladder, you get bumped into a different tax bracket so the government thinks it deserves more of your hard work than you do. It’s time for something big.”

Huckabee proposes a “Fair Tax,” which is very similar to the flat tax proposal that many GOP’ers have been putting forth. Huckabee’s 10 percent flat tax would apply across the board to people of all income levels with no room for variation on every purchase that American’s make.

“It’s built on the common sense with which we raised our kids and train dogs. You reward behavior you want more of. And you punish behavior you want less of. That’s how I raise kids, it’s how I trained our dogs. And folks, it’s not that difficult.”

Yes, Huckabee says that a fair tax is equivalent to the method he used to raise kids and train dogs. Ignoring the fact that this is literally dehumanizing to poor Americans who would suffer from this across-the-board sales tax, Huckabee is also peddling a terrible tax idea (And apparently raising his children by feeding them dog kibble?)

Think of it like making a bulk buy: If you can afford the giant package of toilet paper, you will save a great deal by buying in bulk, but if you can only affor to buy the four-pack of tissue each time, you will be spending more in the long run.