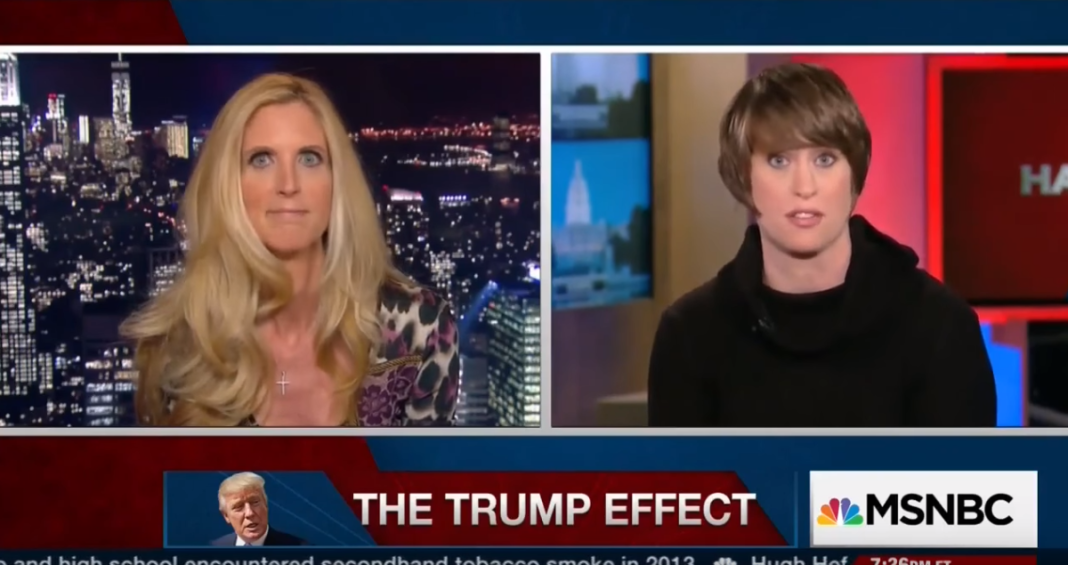 Notorious racist Ann Coulter was absolutely ripped apart for her ill-informed ideas on MSNBC’s “Hardball,” and the best part is, it was by one of her own kind.

“Hardball” host Chris Matthews invited Coulter and GOP strategist Liz Mair on to discuss their opinions on the current state of the conservative campaigns, and things heated up when outspoken Trump supporter Coulter started insisting that immigration was the only issue of real importance, arguing that Americans are tired of being outvoted by foreigners and want to stop the “endless immigration.”

“Donald Trump is the first one to actually take America’s side on immigration. That’s why he is sweeping the polls,” she added.

Mair immediately shut down her ludicrous argument, using surprisingly logical discourse to trigger the signature coulter crazy-eyes. She responded to Coulter’s assertion that the American people have been preventing amnesty action, saying

“I think that that’s a patently ludicrous notion. Most of the time, when we’ve been looking at ‘amnesty fights,’ they’ve actually been shut down by a set of groups that are funded by population-control enthusiast liberal who is actually involved with zero-population growth and the Sierra Club. That’s who’s actually shut it down. It’s not actually in any way advancing the economic interests of the American people. Free-market economists actually agree with that.”

Mair even went on to assert that as a true conservative, she is adamantly anti Trump, calling him out on his penchant for appealing to voter’s prejudices, and going on to boldly claim that Trump’s policies on everything other than immigration qualify him as a liberal, and his supporters were simply “liberals who just happen to hate Mexicans.”

While Mair’s claims aren’t particularly sound, watching the openly bigoted Ann Coulter get demolished by a member of the party she champions is pretty satisfying.