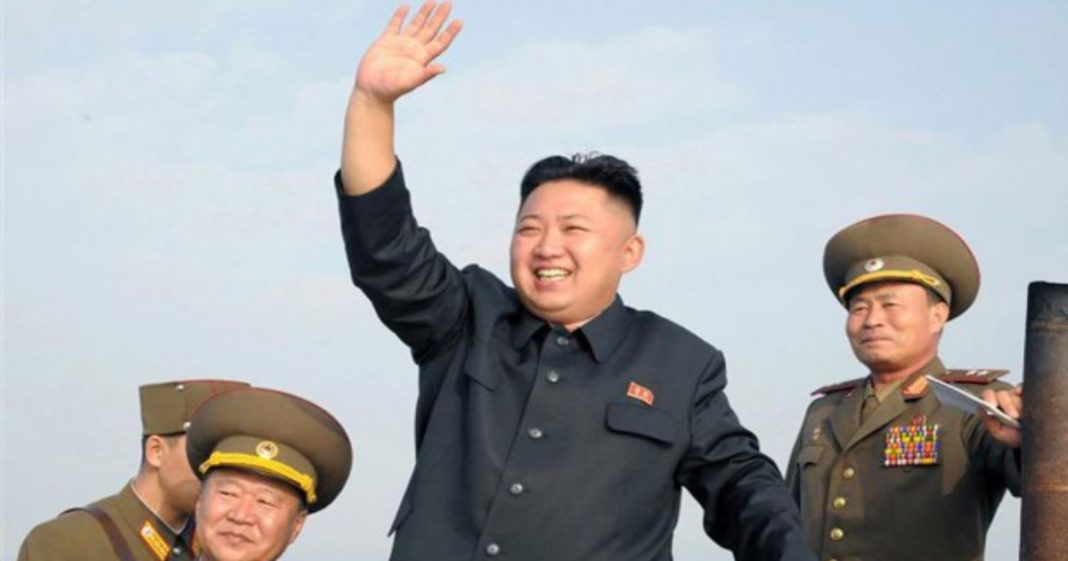 North Korean despot Kim Jong Un may good at committing genocide, sucking the life out of his people and his country, and beating his chest and making threats against world powers, but he’s not much good at anything else.

A recent video that was purported to show the successful firing of a submarine-launched ballistic missile (SLBM) has been exposed as a fake. The attempted launch was a catastrophic failure, but the GOP continues to quake in its collective boots, accusing President Obama of falling down on the job, and criticizing his “failure” to address the North Korean “threat.”

South Korean military analysts and an examiners at the Center for Nonproliferation Studies have determined that the video had been extensively edited in order to make it appear that the failed launch was actually a success. While U.S. authorities are uncertain about North Korea’s actual nuclear capabilities at present, it is clear that the rogue nation is at least four years away from being able to use such a weapon.

These revelations have taken the wind out of the sails for passengers aboard the GOP Clown Car. Only a week ago, they were running around like Chicken Little, sounding alarms over the “North Korean Bomb Threat” as they blamed President Obama as well as both Mr. and Mrs. Clinton for failing to address the issue. Rubio has “been warning…that North Korea is run by a lunatic.” Fiorina calls North Korea “yet another Hillary Clinton foreign policy failure,” while Jeb Bush declared that “[The] North Korean nuke test shows the danger of continuing feckless Obama/Clinton policy.” Then, there is Ted Cruz’ grand announcement: “The Clinton administration led the world in relaxing sanctions against North Korea…now we’re facing a megalomaniac maniac [sic] who may potentially have a hydrogen bomb.”

Even ignoramus Donald Trump is calling for assistance from China and South Korea, warning that the North Koreans are “getting too close to doing something” (gee, Donald – is that the best you can come up with?). Appearing on Fox News, Trump assured the American people that “China has total control over North Korea, and China should solve that problem.”

It’s not just the candidates: Just before the weekend, GOP Representative Pete Olson of Texas authoritatively stated that President Obama’s recent executive actions to address gun violence were no more than political theater intended to distract the American people from foreign threats – such as North Korea obtaining a nuclear weapon (newsflash, Pete: that happened under George W., a fact that the right-wing conveniently chooses to ignore).

Nobody is quite sure what North Korea’s nuclear capabilities are at this point, or how much of a threat they pose to the United States (if any). What is known is that North Korea is an impoverished, isolated third-rate country whose people have been starving as they struggle for survival under a totalitarian jackboot. The North Korean economy is plagued by obsolescence, poor planning, natural disasters and corruption. While it may be true that Kim Jong Un commands one of the largest standing armies on the planet, reports indicate that military equipment is substandard, training standards are low, and discipline and morale nearly non-existent. Although Pyongyang’s attempts to keep the nation’s secrets are ongoing, reports of torture, public executions, forced abortions, slavery, and other human rights abuses continue to come out of North Korea.

And what of China? North Korea was China’s “client state” for decades. However in recent years, North Korea has become a thorn in Beijing’s side. North Korea remains an ongoing source of embarrassment and frustration to Chinese leaders because of its ongoing defiance of the international community and its secrecy and self-imposed isolation.

It will not be surprising if North Korea doesn’t wind up collapsing into a “failed state.” In the meantime, the GOP will continue to rant and rave, using the issue of North Korea to whip up fear and hysteria among voters this year.

Will anyone be listening?