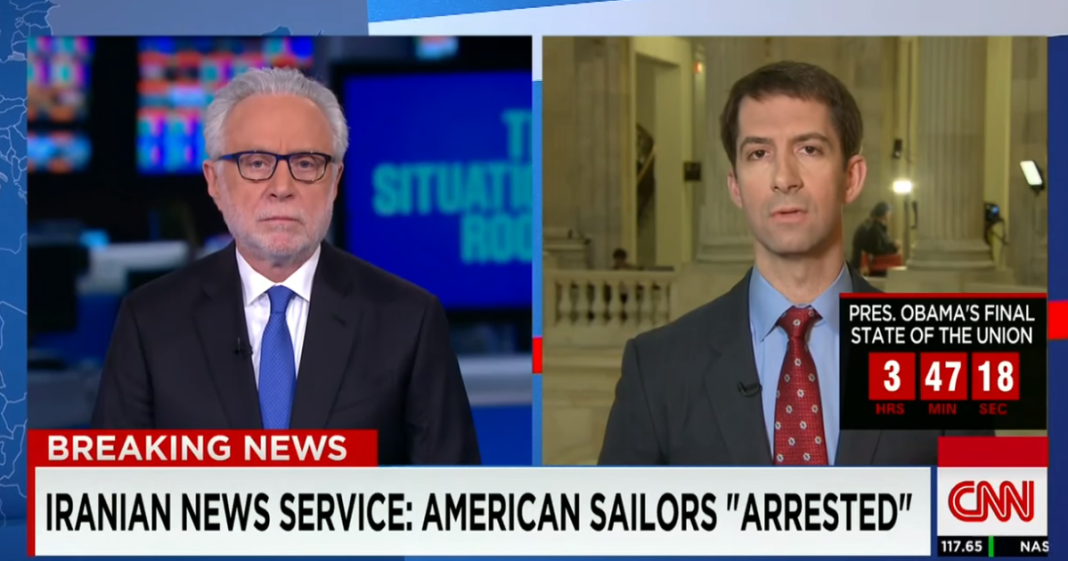 Notorious warmonger Tom Cotton is back on the radar with a renewed bloodlust. The Tea Party Republican senator, best known for his disgraceful attempt to personally botch nuclear negotiations between the Obama administration and the Iranian government, appeared on CNN’s “Situation Room” to fuel fears and spread more lies.

In response to a delicate situation unfolding in Iran in which two Navy boats and ten U.S. sailors were being held by the government of Iran after floating into their territory, Cotton wasted no time stirring up a frenzy with no regard for the potential dangers of pushing his personal agenda.

The incident was considered minor and U.S. officials believe that after steering off course the crew was aided, rather than captured, by Iranian forces. Additionally, Iran confirmed that they were working to “promptly” release crew members. While the absence of aggression should signal positive progress in foreign relations, Cotton saw it as an opportunity to pose an attack on Obama and promote hostility with Iran.

In his interview, Cotton alludes to a much more sinister, and absolutely fabricated, situation in which the troops were “captured” and held “hostage,” spinning the event as “no coincidence” and possibly threatening the already sensitive Iranian relationship, potentially jeopardizing the Navy men he so casually used as a springboard for personal political gain.

Cotton might view the series of events as an “embarrassment” but the truly humiliating thing is that this weasel has once again prioritized himself above the country he claims to serve in such a public and potentially volatile way.