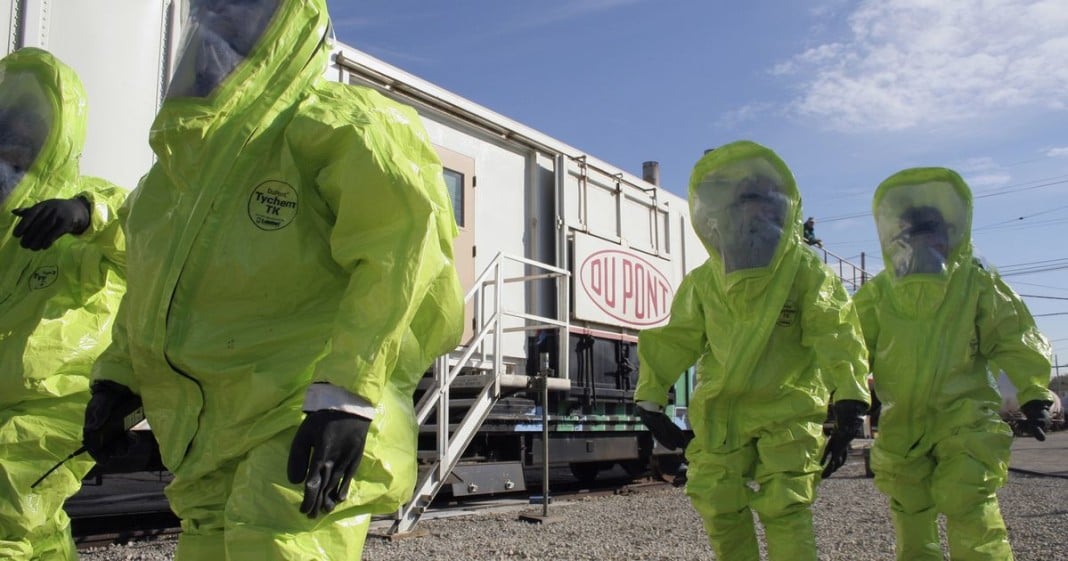 What do you, arctic polar bears, and 98% of the U.S. population have in common? You all have the highly toxic man-made chemical, C-8, in your blood.

C-8 is a cancer-causing chemical that DuPont and a handful of other corporations used to make non-stick, stain/fire proof, “high performance” products such as Teflon. It has been proven that C-8 causes deadly and debilitating human diseases like testicular cancer, kidney cancer, thyroid disease, and ulcerative colitis.

C-8 lasts so long in the environment that any duration provided by experts on biodegradation is a mere guess, and even then, their very best guess says that the half-life of C-8 is a million years.Why does C-8 last so long once it is discarded into the environment? Because it’s a man-made chemical that does not bind to other natural occurring chemicals and it moves in, and is transported by water very easily. The chemical bonds that hold C-8 together are nearly impossible to break, unless heated to VERY high temperatures. It’s tough and rugged. What made it a good surfactant for DuPont is what makes it so very dangerous to humans and animals; it simply will not break down.

DuPont’s C-8 will exist indefinitely. Every pound, every ounce, every molecule of C-8 not properly disposed of is here to stay and will outlast all of us, and nearly everything else known to mankind.

Unlike other toxic chemicals, the durability of C-8 makes it a more nefarious hazard to those exposed. Chemicals that are not easily degraded or passed through the organisms that ingest them are considered “biopersistent”. Biopersistence can result in “bioaccumulation” or the gradual increase in the amount of the chemical in an organism due to poor clearance of the chemical coupled with continued exposure. “Biodegradation” refers to the ability of a chemical to breakdown in the environment. If a chemical is highly biodegradable, the less likely environmental exposure becomes if the chemical is released. If the chemical is not biopersistent, then the duration of exposure to the chemical is shortened. Therefore, knowing that a chemical is biopersistent and not biodegradable is absolutely critical in understanding the risks posed by the chemical, particularly if the chemical is known to be toxic or if the toxicity is not yet fully understood. This is what makes DuPont’s conduct so egregious. DuPont knew that C-8 was toxic to animals and it knew that C-8 persisted in humans, and yet, for nearly 50 years, DuPont chose to increase its use of C-8 at its plant in Parkersburg, West Virginia. This in turn increased the amount of C-8 waste that DuPont released to the environment.

Where is most of the C-8 that DuPont released? Most of it is still in and around Parkersburg- in the water, in the soil, in the animals, on the plants, and in the people. People there, no matter what they do, can’t avoid being exposed to C-8.

The half-life of C-8 in humans is estimated to be 3-5 years. The average American currently has enough C-8 in their blood to take anywhere from 39-65 years for the concentration of the chemical to drop below detectable levels, and that’s only if they cease being exposed.
It doesn’t matter what DuPont does now to filter their water, to incinerate or capture the C-8 it now uses, or even if they never use C-8 again; the hundreds of thousands of pounds of C-8 that DuPont improperly disposed of since 1951, now, because of its unique chemical properties, moves in and out of the water, air, and soil.

But the unique slippery, soluble, soapy nature of C-8 has allowed the chemical to travel far beyond Parkersburg. Besides dumping tons of C-8 directly into the ocean, DuPont’s Washington Works plant fed its C-8 waste directly into the mighty Ohio river – the absolute worst place that DuPont could have dumped the chemical, and the very type of “surface water” that DuPont was expressly told NOT to “flush” their C-8 into. Dumping C-8 into one of our largest rivers- one of our most majestic ecosystems- and one earth’s biggest lifelines has caused C-8 to be spread far beyond Parkersburg. C-8 now flows around the earth freely and a molecule of C-8 will last long enough to circle the globe thousands of times before it’s gone.

And now even Polar bears have it in their blood. Why? Because C-8 lasts so long and can travel in water so easily, it has found its way all the way to the Arctic. Because of the biopersistence of C-8, it’s in all of us.

DuPont knew C-8 was biopersistent, it knew it would not be destroyed once released to the environment, and it has known this since at least the 1970s. Despite this knowledge, DuPont dumped their C-8 waste into our water, our air and our soil.