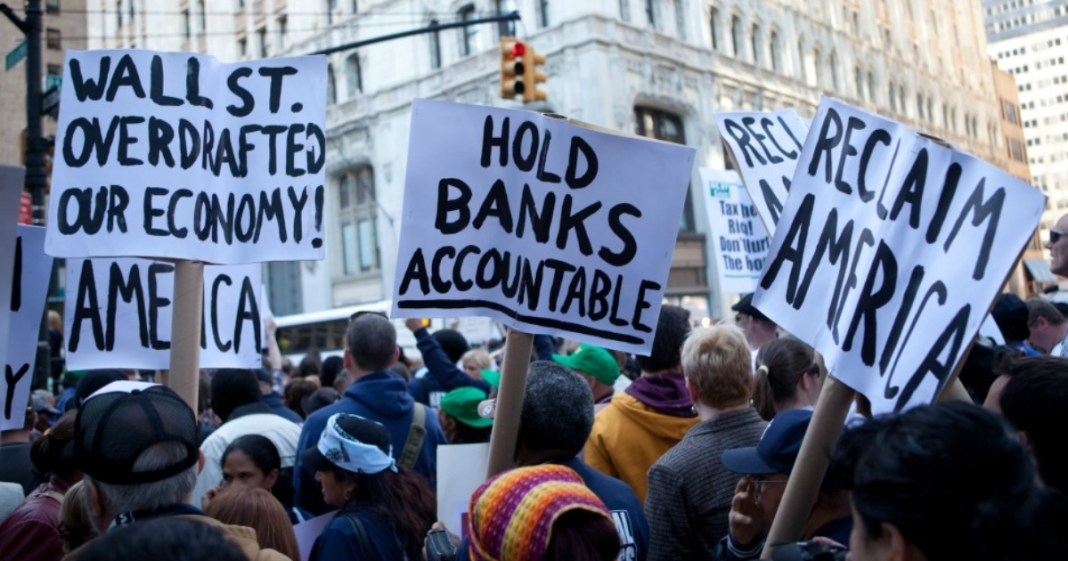 It’s long overdue, but it’s a first step: One of the banking institutions responsible for the economic crash of 2008 who subsequently received bailout funds under the Troubled Asset Relief Program (TARP) is under investigation by U.S. Attorney Charles Oberly.

TARP was signed into law in October 2008 by George W. Bush in response to the economic collapse brought on by Wall Street’s “casino gambling” with subprime mortgages. Of course, this was not called a “bailout,” but rather a measure to “strengthen” financial institutions. However, as we all know, it was essentially a free pass to the the banks and finance companies that were no better than the drunken idiot who goes to Las Vegas in a $45,000 BMW and leaves in a $350,000 Greyhound bus. (Rolling Stone published an excellent piece in 2013, describing in detail what a boondoggle TARP actually was.)

By the time the program came to an end in December of 2014, U.S. taxpayers had spent $426.4 billion to prop up a corrupt and predatory industry that has long been rigging the game. An additional $187 billion went to bail out Fannie Mae and Freddie Mac. Add in another $79.7 billion for the auto industry and other assorted programs, and the entire price tag came to a whopping $681 billion – all on the taxpayer’s dime.

There were conditions. One of those was the disclosure of loans that were past due for 90 days or more. This information was to have been reported to the Securities and Exchange Commission (SEC). Analysis of such information is a primary indicator of a financial institution’s overall viability; it doesn’t take an financial genius to figure out that when a bank is holding a number of loans on which no payments have been made for awhile, something is seriously wrong. Needless to say, with all that virtually “free” money up for grabs (technically, TARP funds were loans that were expected to be repaid, but at terms that even consumers with sterling credit can only dream about), the banksters were lined up around the block to get their share.

Over a year after TARP was signed into law, the Wilmington [Delaware] Trust Corporation was considering a public stock offering to raise $330 million in order to repay the funds it had received under the program. Coincidentally (yeah, right), that was the total amount of past due loans held by Wilmington Trust. For some strange reason, that little detail didn’t make it into the required SEC filing.

One would think that investors would have a right to know that their investment dollars were being used to cover a company’s potential losses. Apparently, the executives at Wilmington “Trust” didn’t think so – or they were concerned that investors might not be so willing to pony up if they knew the truth. That’s the opinion of Oberly, who says, “Wilmington Trust Corporation had an obligation, to its shareholders and to the public, to accurately report the important financial metrics which enable investors to make informed decisions.”

This is just the tip of the iceberg, of course. Last summer, Robert Harra Jr., former president of Wilmington Trust, was indicted on fraud and conspiracy charges, along with three of his colleagues. Additional charges included securities fraud, lying to federal regulators and making false entries in the bank’s ledgers. According to the allegations, their actions in concealing information about the Wilmington Trust’s precarious financial state led to the collapse of the 100-year-old institution in 2011. Wilmington Trust was taken over by M&T Bank Corporation shortly thereafter (the parent corporation is not under investigation).

The sordid history of Wilmington Trust is only one small example of the rot and corruption that infects the entire capitalist financial system. TARP funds were to be used for a specific purpose: the purchase of “troubled assets” in order to bring stability to the system and encourage banks to resume making loans to consumers and small businesses. It was not intended to help banks recoup their losses, and definitely not intended to be spent on executive salaries and bonuses, mergers, acquisitions, and expansion. Yet, for some reason, Wall Street and the financial “services” industry is bigger, more profitable, and more powerful than ever. It’s worth noting that the first TARP-related fraud case was filed just a little over three months after the program was signed into law. Within less than three years, there were over 150 criminal and civil investigations.

What will happen to Wilmington Trust is anyone’s guess. While there are aggressive federal prosecutors willing to go after the banksters, current U.S. Attorney General Loretta Lynch is a long-standing friend of Wall Street – so if she gets involved, don’t expect anyone to go to prison.