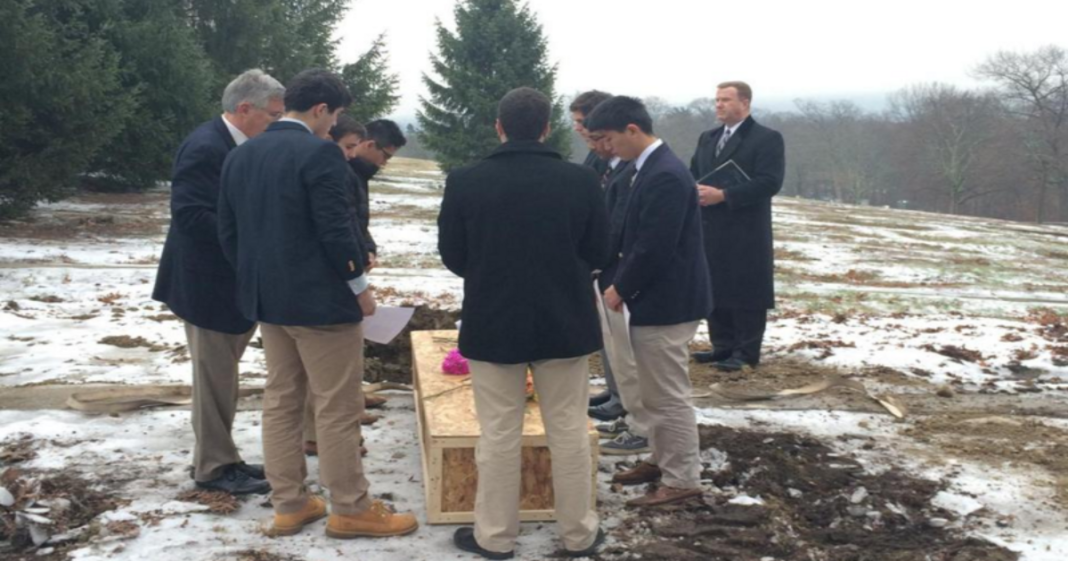 Students attending one of the nation’s oldest and most exclusive private preparatory schools received a stark lesson about the lives – and deaths – of those at the bottom of the economic ladder this week. The occasion was what a previous generation referred to as a “pauper’s burial.” The deceased was a 54-year-old homeless man who had drowned in a nearby river last summer. His body, unclaimed, had been sitting in a morgue for months.

The Roxbury Latin School in Massachusetts predates the founding of the United States by over 130 years. Established in 1645, it is rated as one of the finest schools in the nation in terms of academic excellence – and with tuition currently running at $29,300 a year, its attendees are definitely among the “2%.” Many graduates go on to become prominent physicians, statesmen and academics. However, the important lesson this week was not about traditional academic subjects. It was about life and death, and how it is experienced by society’s cast-offs.

Very little is known about 54-year-old James McDermott – only that he was homeless, penniless and had no family or friends. He had been thrown onto society’s trash heap and left alone to make his way as best he could. His body was pulled from the Charles River in July, and was stored at the Lawler Funeral Home until this week. Bob Lawler, funeral director, is one of the very few who is willing to bury the bodies of the indigent. It took him six months to locate a suitable grave. Over the years, he has done hundreds of such burials, working alone more often than not. The reason, he says, is “because they deserve to be buried. They shouldn’t have to lie there for months on end.”

It’s not the first time students from the Roxbury Latin School have been called upon to serve as pall bearers for such a funeral. Since headmaster Michael Pojman initiated the program in 2011, his students have participated in nearly 60 funerals for homeless people. One pall bearer, a senior, acknowledges, “We do it because it’s the right thing to do.” He points out how fortunate he and his fellow students have been: “We all here have family and friends who would help honor our lives, but Mr. McDermott, sadly, does not.”

In the end, it’s not really about whether or not a body gets buried. Many would argue that the dead are beyond caring, and that funerals are for the living, not the dead. What James McDermott’s funeral and burial really represents is that every human being, regardless of their station in life, deserves some measure of dignity and respect. The tragedy is that, like millions of others who have been tossed aside by our corporatized, hyper-capitalist, hyper-commercial, bottom-line society in which all things – including human life – are measured in dollars and cents, McDermott was not afforded that dignity and respect in life.

In offering those things in death, Roxbury Latin School students are learning the most valuable lesson of all – that every life matters. It is a lesson that will hopefully make these future movers and shakers more compassionate, and guide their actions toward others as they make their way through their own lives.

That is an education that no amount of money can buy.