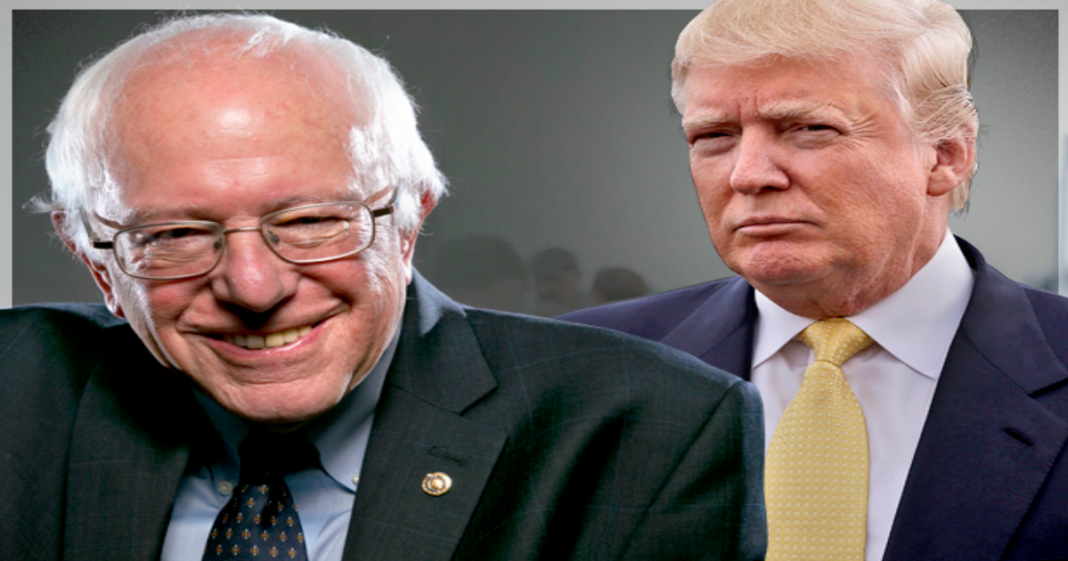 Democratic candidate Bernie Sanders isn’t being shy about calling Donald Trump out on the numerous sexist, racist, misogynistic and downright idiotic statements he’s made over the past several months. He’s even bringing up stupid things Trump said years ago.

Back in November of 2012, Trump authoritatively stated that “the concept of global warming was created by and for the Chinese in order to make U.S. manufacturing non-competitive.” Bernie’s assessment of that statement:

“What an insight…how brilliant can you be? The entire scientific community has concluded that climate change is real and causing major problems and Trump believes that it’s a hoax created by the Chinese. Surprised it wasn’t the Mexicans.”

More recently, Bernie commented on Trump’s use of the Yiddish word shlong, a noun referring to the male genitalia. Last month, referring to Hillary Clinton’s primary defeat in 2008, Trump employed the word as a verb, stating that Hillary “got shlonged” in the 2008 election. Appearing on The Nightly Show, Sanders, who is Jewish, was asked for clarification on Trump’s use of the word. Sander’s said, “I think you’ll have to ask Donald Trump for an explanation of that.” Referring to Trump’s outrage and disgust at Hillary’s temerity when she had to visit the restroom during the recent Democratic debate, Sanders added, “I have yet to recover from Trump’s shock that women go to the bathroom.”  It is a small wonder that Bernie considers Trump to be “an embarrassment for our country.”

Of course, “The Donald” hasn’t been taking it lying down. He’s been firing back, calling Sanders a “wacko” (ah, there’s a sophisticated term for you!) and a “maniac.”

One thing is becoming clear: Should the two anti-establishment candidates wind up facing off in the general election, Bernie will be the clear winner. Right now, Trump is getting all the media attention, while Sanders is getting buried – even by his own party. However, the polls tell a different story: Over the past few weeks, Sanders has come out on top in 12 out of 17 national polls. In one of them, Sanders defeated Trump by 13 percentage points.

Part of what is helping Bernie is Trump’s ongoing tendency to shoot himself in the foot. While his rhetoric and thoughtless, stupid comments appeal to a certain demographic, they are not sitting well with most of the educated electorate – who are the most likely to show up at the polls. His feud with Hillary Clinton is also giving Sanders a boost, as he keeps bringing up her past mistakes and other miscellaneous baggage.

The other part of the equation should come as no surprise: People across the political spectrum are sick and tired of the status quo. The media, as well as the Democratic and Republican Establishment, may continue to shove Hillary Clinton and Marco Rubio or Ted Cruz down the nation’s throat, but if polls are any indication, an increasing number of Americans aren’t buying it.

If it comes down to a contest between Bernie Sanders and Donald Trump, Bernie has no worries; “I don’t have to spend money to make Donald Trump look dumb,” Bernie said. When Nightly Show host Larry Wilmore asked Bernie if he would “shlong” Trump in the general election, he replied: “Let me say, we will beat him badly.”

And Bernie will – but only if voters show up to the polls en masse. Bernie Sanders represents a new direction for the country. That should be plenty of motivation to get out there and get active. There’s a lot at stake in this election cycle – don’t sit this one out.