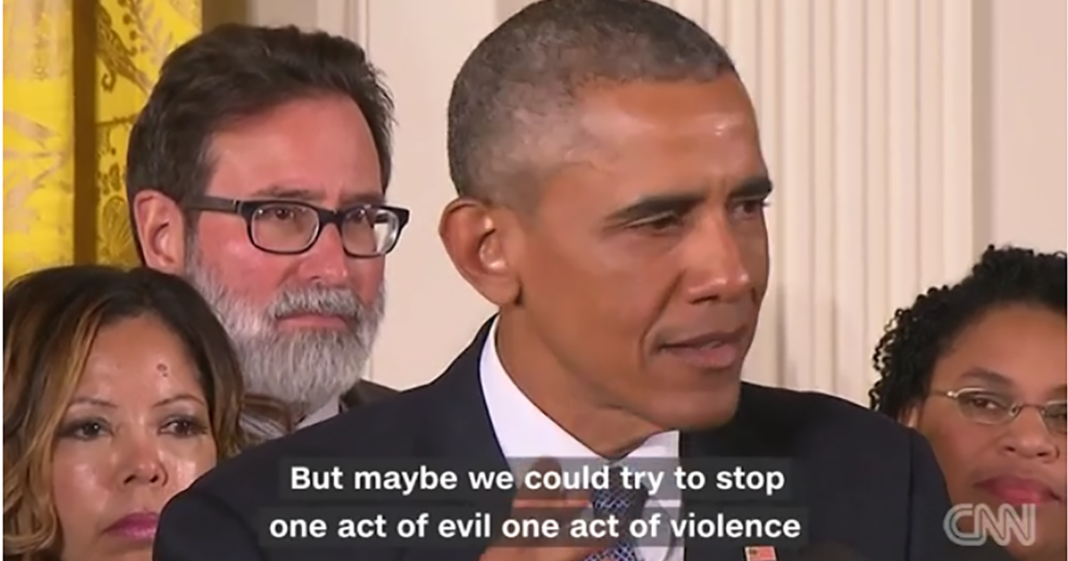 On the average, 36 Americans died from gun-related injuries each and every day in 2015. Despite calls for tighter gun control, Congress – largely beholden to the gun industry and the National Rifle Association – has either ignored the issue, or been fighting every attempt to restrict gun ownership and availability.

President Obama has had enough. Today, he announced his own plan to reduce the carnage and bring some sanity back to the issue. This time, he’s not going to bother with the Congress that for the past seven years has blocked his agenda at every turn. On Monday evening, he threw down the gauntlet: “The gun lobby may be holding Congress hostage, but they can’t hold America hostage. We can’t accept this carnage in our communities.” Using his executive power, the President is putting forth a 10-point proposal to make the country safer – despite Congress, the NRA and the assorted psychopaths waving the 2nd Amendment (which they really don’t understand).

At the heart of President Obama’s proposal is greater regulation and oversight of gun retailers. New rules would require gun merchants, including those doing business at gun shows and online, to have licenses. It would also require licensed sellers to conduct background checks on every purchaser. In addition, individual private sellers who attempt to hide behind the “hobby exemption” will face greater scrutiny.  In order to facilitate all of this, the President has authorized the FBI to hire over 230 more examiners and support personnel, who will be working around the clock (understaffing has been hamstringing the FBI’s ability to conduct background checks). Gun manufacturers aren’t off the hook, either: a new regulation will require any guns lost during shipment to be reported to the authorities.

To address the illegal gun trade, the Bureau of Alcohol, Tobacco, Firearms and Explosives (ATF) now has additional resources for tracking such sales and exchanges on the Web. Four million dollars has been earmarked for upgrades to the National Integrated Ballistics Information Network (NIBIN), a database created in 1999 for sharing information on gun-related crimes and perpetrators.

A major provision addresses one of the most serious aspects of the gun issue: mental illness. There have been numerous shootings over the past several months carried out by mentally-unstable individuals who should never have had a gun (sadly, a recent federal court ruling has exacerbated this problem). President Obama wants to spend an additional $500 million for the treatment of mental patients. Unfortunately, this is where he will most certainly run into opposition from Congress, since any spending bill must be approved by lawmakers.

Not surprisingly, GOP members of Congress as well as Republican candidates have already gone on the attack. House Speaker Paul Ryan accused the President of “subverting the legislative branch, and potentially overturning its will,” calling it “a dangerous level of executive overreach.”

There will be legal challenges, not only from recalcitrant members of Congress, but from gun-rights activists. However, while these challenges may be able to delay or stonewall some of the President’s proposals, they won’t be able to stop most of them. Under the Constitution, the President’s powers are limited, and in most cases, Congress can block almost any action or proposal coming from the Oval Office. However, Executive Orders, when used to direct and enable federal agencies and officials to carry out certain duties, have the full force of law – and there is very little Congress can do about them.

Based on the “grant of executive power” outlined in Article II of the Constitution, Executive Orders enable the President to bypass Congress in order to institute policy. Such orders do not require Congressional approval, and neither can lawmakers overturn an Executive Order. The only option Congress has in this case is to pass a bill defunding anything required to enforce such an order. However, the President can always veto such a bill, and Congressional override requires a 2/3rds majority in both Houses. The only way an Executive Order can be overturned is for a President’s successor to reverse it – so, if the next President is a Republican, chances are good that President Obama’s new gun control efforts will go right out the window.

That is something to think about as we go to the polls this election.