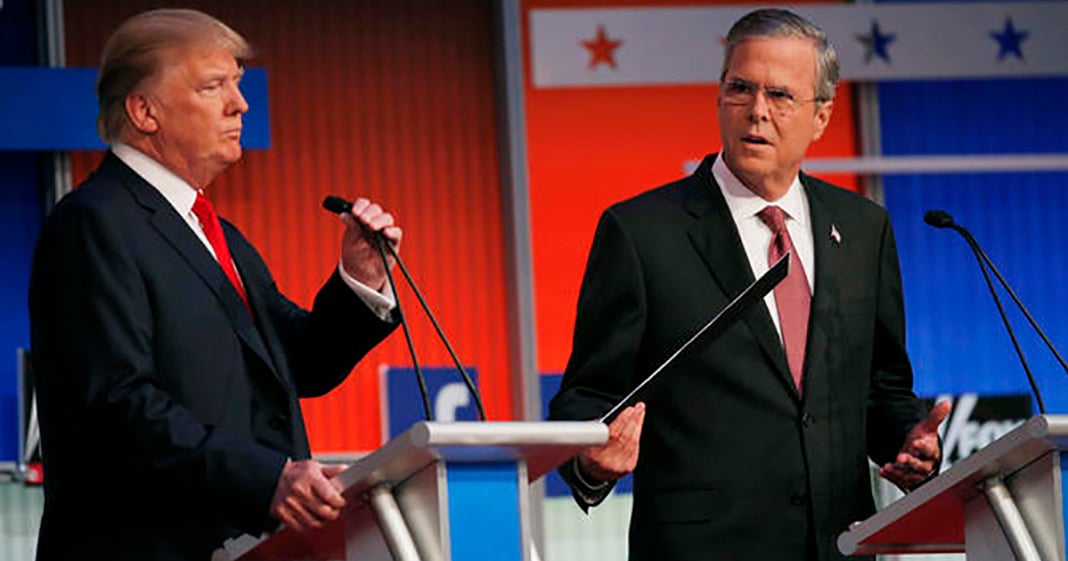 With the Iowa caucus just one month away, the GOP contest is turning into a melee resembling the ongoing civil war in Syria, with every contender at each other’s throats. At the same time, it appears that mainstream Republicans are sitting on their hands, apparently waiting to see how it all plays out.

One prominent Republican in the Hawkeye State draws a contrast between the current cycle and the last Presidential election. He points out that in 2012, the GOP establishment and the rank-and-file were solidly behind Mitt Romney. This year, however, they have been “sitting there…without a candidate of their own.” Jeb Bush’s chief strategist, David Kochel, agrees with that assessment, describing Iowa Republicans as “the most undecided bloc of voters that you could find.” According to Kochel, Iowa voters are going to make their choices at the last minute after hearing what all the candidates have to say.

The front-runner in Iowa, not surprisingly, is Trump – but Ted Cruz has been nipping at his heels. At the same time, Chris Christie has turned his attention away from New Hampshire, switching his Granite State flag lapel pin for Iowa’s as he stumps across the eastern part of the state, soliciting votes.  Meanwhile, former Tea Party darling Rubio retains some Establishment appeal. Currently in third place behind Trump and Cruz, he is busy traveling around the state with his family in tow – along with his latest big supporter, South Carolina GOP Representative Trey Gowdy.

They have their work cut out for them; Iowans are nothing if not pragmatic. Farmers and businessmen and women are less concerned about conservative ideology and rhetoric than they are with their own wallets. They’re also looking to see who is most likely to beat Hillary Clinton in the general election. So far, those voters are taking a “wait and see” approach.

The other “Establishment” GOP candidate to watch is Jeb Bush, who plans to carry on his family’s disastrous dynasty starting in 2017. Right now, he is in fourth place, polling at under 5%. However, the Bush name carries a lot of weight among prominent Iowa Republicans, whose loyalties go back to George H.W. Bush’s first run at the White House thirty-five years ago. Counting on those loyalties, the Bush campaign has been carpeting the television airwaves in Iowa with campaign ads for much of the past year.  It hasn’t necessarily helped him; even those who might otherwise vote for Bush have doubts about whether or not he can beat Clinton.

Jeb Bush has been declared politically dead on numerous occasions. So far, however, none of the other members of the GOP Clown Car appear to be generating any real enthusiasm, other than Trump – for whom the Republican Establishment has little love. This is what may enable Bush to pull his campaign out of the fire. He’s running a distant fourth behind Cruz and Rubio, but GOP voters are lukewarm about those two, both of whom have their own baggage.

Bush may also have some baggage related to his brother’s disastrous Reign of Error and the fact that Americans aren’t crazy about political dynasties (an issue that has come up for Hillary, periodically). Nonetheless, while Donald Trump retains tremendous appeal among populists (at least the low-information and mentally challenged ones), Bush has the name and the political influence among Establishment Republicans – as well as the donors. According to the last Federal Election Commission Filing on October 15th, Bush was able to raise $13.4 million, putting him ahead of Ted Cruz and Marco Rubio (only Carson did better at $20.8 million – but as of this writing, the Carson campaign is rapidly imploding). Furthermore, Bush’s donors have very deep pockets, and they won’t hesitate to invest their money in his campaign in order to defeat Trump.

Money is not necessarily a substitute for popularity and high poll numbers (as Romney and the Koch Brothers discovered in 2012). Nonetheless, early primaries in Iowa and New Hampshire can be game changers – and if it comes down to who can spend the most money, Bush is better positioned to take on Trump than the other GOP candidates.

Which is a sad commentary on the state of American politics…