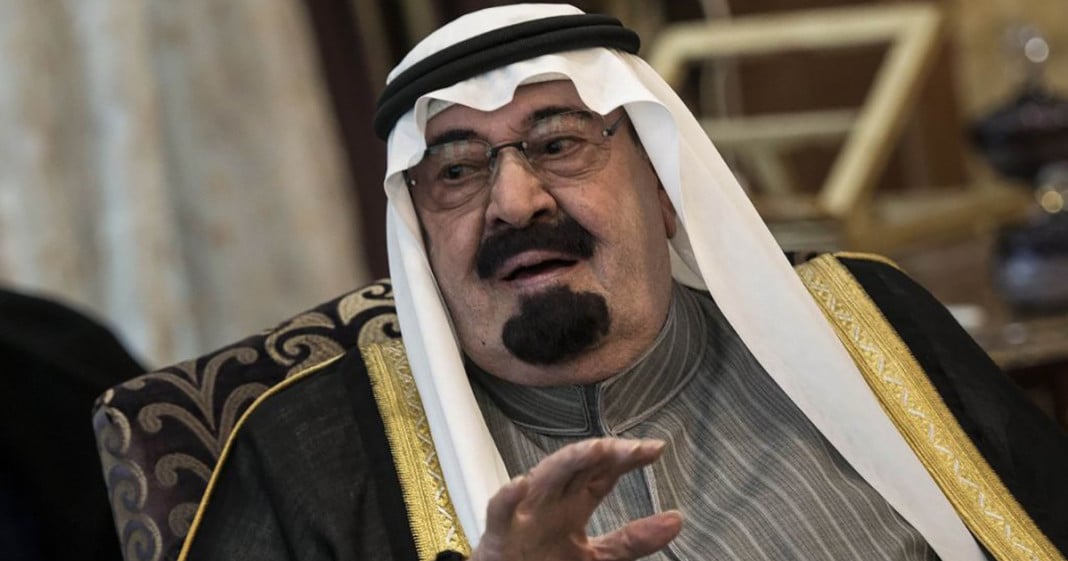 It appears that Uncle Sam’s good friend, the Royal House of Saud, is playing both ends against the middle. Only about two weeks ago, the Saudi Defense Minister, Prince Mohammed bin Salman, announced that his nation would lead a coalition of Muslim nations around the world in order to help the ongoing battle against terrorism. But here’s the other side of the equation: failure to deal with the driving force behind Islamist terror – namely the extremist form of Saudi Arabia’s Sunni form of Islam, known as Wahhabism – will make fighting that battle, let alone winning it, virtually impossible. And the dirty, if not particularly well-kept secret, is that the Saudi Royals have been financing terrorist organizations for over forty years.

It’s something that GOP candidates aren’t talking about, although they’re well aware of it. It’s difficult not to be; 15 of the 19 hijackers behind the attacks of September 11, 2001 were Saudis. According to intelligence reports, there is a high likelihood that those hijackers were aided and abetted by officials of the Saudi government – but according to former Senator Bob Graham of Florida, the FBI has been withholding information, engaging in what he describes as “aggressive deception.”

GOP candidates have never said a word about those reports, or have made any mention of Graham’s concerns.

As Secretary of State in 2009, Hillary Clinton publicly identified Saudi Arabia as “the most significant source of funding to Sunni terrorist groups worldwide.” Now that she is the Democratic front-runner, one wonders why the GOP Clown Car hasn’t called her out on that statement. They’re certainly fanning the flames of fear among the U.S. electorate, with references to World War III and dire warnings such as that from Ted Cruz, who warned that “[the] biggest threat we face is radical Islamic terrorism.” All this, despite the fact that there has not been a single attack on American soil by ISIS (those responsible for the recent attack in San Bernardino were ISIS sympathizers, according to the FBI – but had no official ties to that organization).

So far, not one GOP candidate has uttered a single word against Saudi Arabia. Writing on Salon.com, David Masciotra writes that the alliance between Saudi Arabia and the U.S. is “mostly a one-way relationship in which the United States is subservient and obsequious – essentially a harem to the Saudi royal family, who collect all the benefits and rewards.”  That assessment is a valid one. The validity of that description is obvious to everyone who drives a gas-guzzling automobile every day, battling bumper-to-bumper traffic during the daily commute on so-called “free”–ways overflowing with hundreds of thousands of other gas-guzzling vehicles, more than 90% of which contain a single occupant.

To be more specific, the alliance between the U.S. and the Royal House of Saud is very much the same as that between a drug addict and a drug pusher. The drug, of course, is petroleum – and it has been our collective addiction for decades. Given the political and economic power of the oil industry, it’s an addiction that could continue far into the future – either until the oil runs out, or the planet burns up, whichever comes first.

Meanwhile, right wing politicians and media pundits continue their jingoistic chest beating about the “war on radical Islam,” sounding the alarms about the “ISIS threat.” At the same time, they refuse to acknowledge the evidence that is staring all of us in the face. Democratic candidates aren’t doing much better; according to Al-Jazeera, 2015 was a stellar year for Saudi Arabia in the field of human rights abuses and violations. This past year, the Saudi government has publicly beheaded more “criminals” than at any time over the past two decades, for offenses such as abandoning the faith, practicing witchcraft and simply criticizing the government. That government routinely tortures and murders its own citizens as well as foreigners.

Yet, America continues its dysfunctional relationship with its drug pusher in the Middle East. Even if the U.S. is less dependent on Saudi oil than it has been in the past and crude oil prices are falling, Saudi Arabia controls approximately one-quarter of the world’s oil supply. This puts the Saudis in a powerful position when it comes to controlling the market. At the same time, Saudi Arabia is America’s Number One customer of U.S.-manufactured weapons. As of last year, those sales made the industry a whopping  $36.2 billion.

In addition to U.S. arms and weapons, the Saudis use their incredible wealth to build mosques, schools and community centers for Wahhabists, Islam’s analogue to America’s violent right-wing Christianist fundamentalists. Like their Christian fundamentalist counterparts in the U.S., Wahhabists call for a literal interpretation of their scriptures – including the slaughter of “infidels,” “apostates” and “heathens” in the name of their deity.

And we’re supposed to believe that Saudi Arabia is sincere about forming a coalition to fight Islamist extremism?

One nation that was not invited to join Saudi Arabia’s coalition, significantly enough, was Indonesia. That Southeast Asian nation has twice as many Muslims living in it as Saudi Arabia. Unlike Saudi Arabia, Indonesia is a vibrant, thriving democracy. It is a nation with a secular government, and a society that promotes tolerance. It is difficult for extremists to gain much of a foothold in such an advanced and democratic country. On the other hand, autocratic, theocratic regimes such as Saudi Arabia are prime breeding grounds for extremist groups such as jihadists.

It’s becoming easier to connect the dots and see that all of us are being played for the benefit of powerful economic interests – primarily, the oil and weapons industries. God/Allah is just an excuse that has been employed for centuries. Saudi Arabia, despite its announced intentions to take a more active role in combating Islamist terror, has a vested interest in promoting and aiding terrorism. Its oil markets are at stake, after all. The U.S., despite its politicians’ claims of wanting to end terrorism and promote peace, has a vested interest in perpetual warfare. The profits of the powerful arms industry are at stake, after all.

It’s a sick, dysfunctional, symbiotic relationship that is threatening the very existence of life on earth. Unfortunately, too few people have been able to make the connection – until now. Making those connections and exposing their game is the first step toward putting a stop to it.