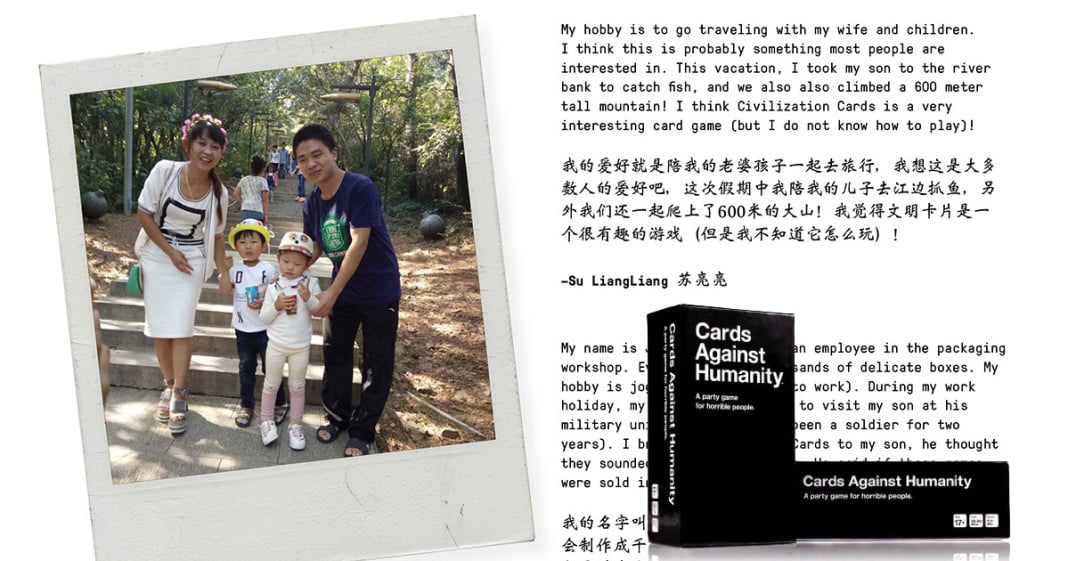 The makers of the popular – albeit crude – party game Cards Against Humanity posted an open letter online that is a heartwarming reminder to corporate America that the factory workers we depend on are worthy of dignity and respect.

“This year, 150,000 people signed up to receive Eight Sensible Gifts for Hannukah from us.

Like many of the physical products we buy, most of these gifts were made in China. This is something a lot of companies don’t like to draw attention to, and as a result Americans often don’t see the labor that goes into the things they buy. But we’ve always viewed the way our stuff is made as a part of who we are.

Our printer in China has grown with us from a small business to a huge operation, and it’s important to us to go above and beyond our obligation to the workers who make our game. While our factory provides excellent wages and working conditions, Chinese working conditions are generally more strict. This year, we used the money from one day of our holiday promotion to give our workers something very uncommon in China: a paid vacation.

The printer didn’t have any formal procedures for paid vacations, so we bought 100% of the factory’s capacity and paid them to produce nothing for a week, giving the people who make Cards Against Humanity an unexpected chance to visit family or do whatever they pleased.

This doesn’t undo the ways that all of us profit from unfair working conditions around the world, but it’s a step in the right direction. Below yo’ll find some thank-you notes and vacation photos from that factory staff shared with us.”

This is not the company’s first act of corporate charity. According to WikiPedia:

The creators of Cards Against Humanity have been charitable. In December 2012, Cards Against Humanity released a special holiday expansion pack and allowed users to choose their price. The average amount paid was $3.89 (with the majority of contributors paying $5) which resulted in an overall profit of $70,066.27, which the makers donated to the Wikimedia Foundation. The following year, in December 2013, the creators released a “12 Days of Holiday Bullshit” promotion where contributors would pay $12 to receive 12 random presents over a span of 12 days. On the tenth day, Cards Against Humanity donated $1 for every person who contributed to this deal, amassing a grand total of $100,249.94 that was donated to several educational projects via DonorsChoose.

Cards Against Humanity announced a science-themed expansion pack in 2015, which promised to donate the profits to scholarships for women going into STEM. The pack has raised over $500k for the scholarship.

On November 19, 2015, Cards Against Humanity announced a fantasy-themed expansion pack, written by various fantasy authors including Patrick Rothfuss. For the first two weeks of the sale of this pack all of the proceeds were promised to be donated to Worldbuilders, in support of Heifer International. Worldbuilders is a charity organization started by Pat Rothfuss.

In December 2015, Cards Against Humanity launched their holiday gift campaign with “Eight Sensible Gifts for Hanukkah” in which humorous gifts were sent out over the course of the Hanukkah holiday. The first three gifts were pairs of socks, with later gifts including a year-long membership to Chicago Public Radio station WBEZ, as well as a week of paid vacation for their Chinese-based manufacturing plant staff.