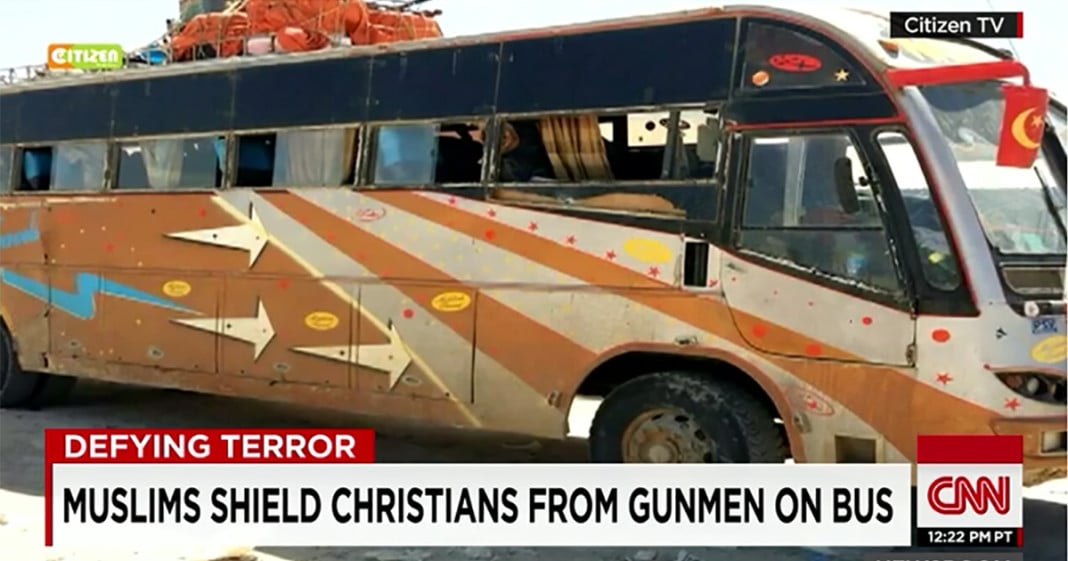 When a group of Islamic militant terrorists attacked a passenger bus in Kenya earlier this week, their objective was to find all Christians on board and murder every one of them. Those Christians were protected by their fellow passengers – who happened to be followers of Mohammed rather than Jesus.

The militant group that attacked is known as Harakat al-Shabaab al-Mujahideen, or “Al-Shabaab” for short. It translates from Arabic as “The Movement of Striving Youth,” and is essentially the East African branch of Al-Qaeda, based in Somalia. Al-Shabaab is the product of the Somali Civil War that began in 2006. Designated as a terrorist group by the U.S., the U.K., and six other nations, Al-Shabaab is at war with the Federal Government of Somalia, the peace-keeping African Union Mission in Somalia (AMISOM) – and anyone else it perceives as “enemies of Islam.”

Al-Shabaab “declared war” on Kenya after the Kenyan military marched into Somalia in October 2011 in order to stop the militants from crossing its border with Somalia. Al-Shabaab blames Kenyan civilians for voting in the government that has gone to war against them. As a result, Kenyan civilians are their primary targets. Since September 2013, there have been six attacks on unarmed civilians, including a shopping mall in Nairobi, tourist hotels, a quarry, and most recently, Garissa University College. In one bus attack, members of Al-Shabaab executed 28 non-Muslim school teachers. To date, the death toll is 327 – most of whom were gunned down because they are followers of Jesus instead of Mohammed.

Al-Shabaab’s usual practice is to separate all the Muslims from the Christians, then release the former while murdering the latter. Monday’s incident was no different. Passengers on the bus were ordered to segregate themselves according to religion.

Except that it didn’t work out that way. Instead, the Muslims aboard the bus refused to co-operate. They even provided religious clothing to the Christians in order to confuse the attackers.  One of the Muslim passengers told reporters, “The militants threatened to shoot us but we still refused and protected our brothers and sisters.” A local magistrate, Ali Roba, confirmed the story: “They refused to separate from non-Muslims and told the attacks to kill all passengers or leave.”

There has been some speculation about why the Muslims aboard the bus were willing to stand up for their Christian compatriots. According to Roba, “The locals showed a sense of patriotism and belonging to each other by insisting that the al Shabaab should kill them together or leave them alone.” Another Kenyan official said, “We are all Kenyans, we are not separated by religion…we are one people as a nation. And this is a very good message from my brothers and sisters from the Muslim community.”

There is another aspect to this story. Religious scholar Dr. John Andrew Morrow has published translations of a document dating back to the early 7th Century, written and signed by the prophet Mohammed himself. Known as the Promise to St. Catherine, it says:

As a covenant to those who adopt Christianity…we are with them. Verily, I, the servants, the helpers and my followers defend them, because Christians are my citizens, and by Allah, I hold out against anything that displeases them….No one is to destroy a house of their religion, to damage it, or to carry anything from it to the Muslims’ houses. Should anyone take any of these, he would spoil God’s covenant and disobey His Prophet…No one is to force them to travel or to oblige them to fight. The Muslims are to fight for them…Their churches are to be respected…No one of the nation [of Muslims] is to disobey the covenant till the Last Day.

That seems pretty clear. Despite all the attention given to fanatical terrorist groups like ISIS, Al-Qaeda and Al-Shabaab by a corporate media that thrives on divisiveness and fear and sowing hatred, the vast majority of the world’s 1.6 billion Muslims take their prophet’s directive seriously. Last year about this time, a group of 200 young Muslim men in Nigeria surrounded a Christian church in order to protect those within so they could conduct a Christmas service in peace. In 2013, Muslim men stood guard over a Catholic cathedral in Egypt in order to protect the building from vandalism and congregants from attacks while they celebrated Mass inside. In October of that year, Muslims in Lahore, Pakistan formed a “human chain” around a church in order to show solidarity in the wake of two suicide attacks on All Saints Church in Peshwar.

These actions, along with the courage shown by Muslims in Kenya this week, clearly demonstrate that ISIS and Al-Shabaab do not represent Islam any more than the Ku Klux Klan or the Westboro Baptist Church represent Christianity. These are the stories that need to be heard.

The battle for tolerance and acceptance will not be won by force and violent rhetoric. The outcome will be determined by quiet, courageous action on the part of those of all persuasions – Muslim, Christian, Jew, Hindu, Buddhist, Zoroastrian, Sikh, Wiccan or any other – who take their faith seriously and understand the core principle that underlies all religions: “Treat others as you yourself would be treated.”