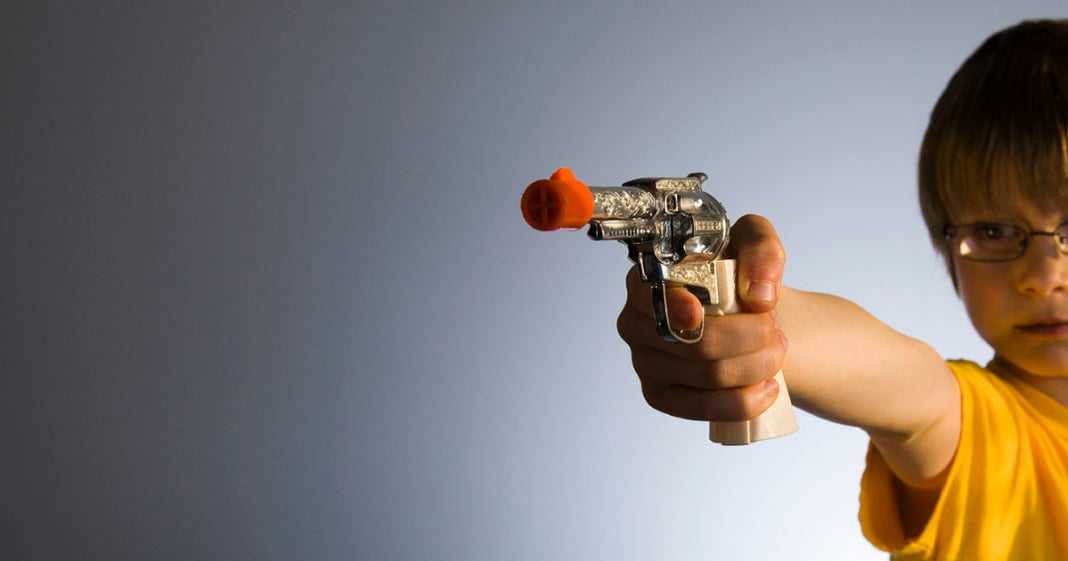 Many people of a certain age may have fond childhood memories of playing “cops and robbers” or “cowboys and Indians” with toy cap pistols, re-enacting scenarios seen in movies and on TV. Of course, those were very different times. Today, with stories of children being shot to death with real firearms and society’s paranoia at levels not seen since the days of Senator Joe McCarthy and the Red Scare, the idea of children playing with toy guns resembling the real thing should horrify anyone. It is certainly of concern to New York Attorney General Eric Schneiderman. In a recent press statement, Schneiderman said,

When toy guns are mistaken for real guns, there can be tragic consequences…New York State law prohibits the sale of imitation weapons that closely resemble real guns. I will continue to enforce this law so that we can avoid putting both children and law enforcement officials at risk.

This means that realistic toy guns are off children’s’ Christmas wish in the Empire State lists for this year – and for every year to come. It doesn’t mean children can’t have them. However, according to the law, toy guns must look exactly like what they are – toys. According to the statute, toy guns must be “colored entirely white, bright red, bright orange, bright yellow, bright green, bright blue, bright pink or bright purple or a combination of these colors” – so they cannot be mistaken for an actual firearm.

There is genuine reason for concern. Since 1997, four people in New York State have been killed and one child has been critically injured because police mistook toy guns for the real thing. Only a year ago, a 12-year-old boy in Cleveland, Ohio, was shot and killed by police officers when he was holding a realistic toy firearm. The legislative ban on the sale of realistic-looking toy firearms is intended to prevent these kinds of tragedies. In enacting this law, New York joins California, Florida, Indiana, Massachusetts, Nebraska, Ohio and Washington, all of which have passed similar legislation.

Historically, children’s toys in virtually every society have had the function of allowing them to rehearse and familiarize themselves with the roles they are expected to assume in adulthood. One woman, posting on a social media page, called Moms Demand Action for Gun Sense in America, summed up her views in no uncertain terms:

I never want my kids to run out of ways to pretend to kill each other! I love that we have toy guns. I keep them with our Pretend Ebola Vials, Mini Nuclear Warheads, Toy Heroin Needles, and Imaginary Arsenic.

Of course, the irony and sarcasm in that statement should be readily apparent. It certainly begs the question of why we, as a society, are not only allowing, but actually encouraging children to get accustomed to the idea of carrying firearms and using them to assault others, just as if we were all living Hollywood’s version of the “Wild West.” But seriously – how is that any different than the ways in which many of today’s aging baby boomers acted out their fantasies as children?

Again – these are different times. In those days, gun violence was commonly portrayed in film and on television – but we all understood that it was just actors on a screen. Actual blood and injuries were virtually never seen on TV, and only rarely in film.  It was very uncommon for most of us to witness real, blood-soaked violence first hand. Those of us who were unlucky enough to actually see it in real life were shocked, sickened and horrified as any normal, healthy human being would be. Today’s brand of hyper-realism, as well as sensationalism on the news, has desensitized too many of us. At the same time, politicians and the gun industry continue to fan the flames of fear, hatred and paranoia. As a result, too many fearful, hate-driven, psychotic men and women suffer from arrested development, continuing to demand their so-called “Second Amendment” rights.

Children will be children. Like the baby boomers of 45-60 years ago, they will want to act out adventures they see on television and in the movies. One blogger, known as “Scary Mommy,” wrote “Knowing my boys, they’ll end up simply turning innocent items like spoons and wands into weapons, anyway.”

Indeed, conflict is at the heart of virtually all narratives in our culture. Perhaps it is time to start telling ourselves new stories. In the meantime, we should be making every effort to make certain that our children clearly understand the differences between fact and fantasy. Toy and game consultant Scott Steinberg gets it right: “Kids playing with toy guns is not an issue in and of itself – as long as they clearly look like toys…parents should be aware of the larger issues.”

Perhaps, in a more-enlightened future society, the concept of guns used as weapons will be as abhorrent to our descendants as medieval tortures such as impalement and drawing and quartering are to us in the 21st Century. For now, we should be protecting our children from the dangers of being shot by police officers who mistake their toys for a mortal threat. We should also be educating them better on how to differentiate fact from fiction. We should also be instructing them in the universal moral codes that prohibit the taking of life for any reason other than in the defense of one’s self and others – and only when there is no other option.

Making sure that toys are easily identifiable as such and understanding that play is very different from real life is a good first step.