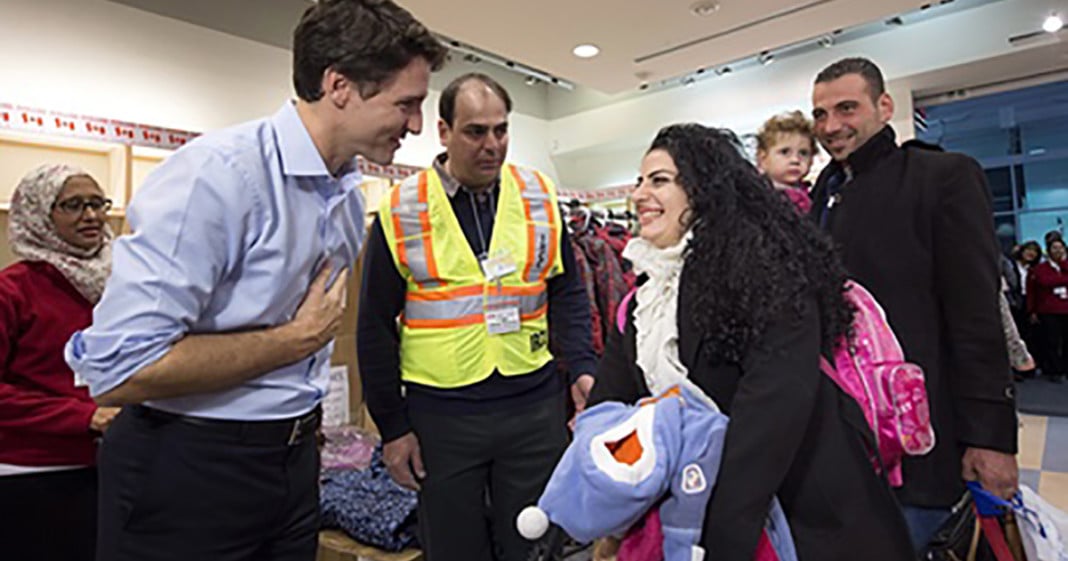 Here at home and in the E.U., political leaders and candidates are sounding the alarms about the “threats” posed by Syrian refugees. Meanwhile, our sibling nation to the north is taking a much different approach. Canada is welcoming Syrian refugees. Not only that, the Canadian government is giving them social insurance cards, granting them landed immigrant status and offering them opportunities to gain full citizenship.

It shouldn’t come as a surprise. When Prime Minister Justin Trudeau was campaigning for the office he now holds,  he and his fellow Liberal Party members pledged to resettle up to 25,000 Syrian refugees within the next twelve months. The Liberals were nearly forced to reconsider in the wake of last month’s terrorist attacks in Paris. As it is, Canada’s offer applies only to family groups, single women and children – lone men are still regarded as security risks.

Nonetheless, it is a great humanitarian gesture from which U.S. and E.U. leaders would do well to learn. President Obama has pledged to allow 10,000 Syrian refugees to enter the U.S., but many state governors – primarily in the former Confederacy – are refusing to allow them. They may be in for a rude surprise; U.S. immigration policies come under Federal law, which supersedes state statutes.

Since the refugee crisis began almost two years ago, Canada has admitted 3,500 Syrian refugees. Friday, Prime Minister Trudeau showed up at the Toronto Pearson International Airport to personally welcome 160 new arrivals – along with a contingent of ordinary people bearing gifts of blankets and clothing suitable for the Canadian winter.  The refugees will be followed by 10,000 more next month and another 15,000 by the end of February.  Prime Minister Trudeau said: “This is a wonderful night, where we get to show not just a planeload of new Canadians what Canada is all about, we get to show the world how to open our hearts and welcome in people who are fleeing extraordinarily difficult situations.”

Trudeau is spot-on. While the rest of the world cringes in fear and revulsion, Canadians open their hearts and their homes in a display of humanitarianism that should shame the rest of us.

Of course, most Americans are every bit as generous as their neighbors to the north. Despite what the fear-mongering corporate media would have us believe, the majority of us here in the U.S. would do no less for those in distress. Indeed, it is an ideal upon which our nation was built – even if we have often fallen short of that ideal. It is summed up neatly in the sonnet penned by poet Emma Lazarus in 1883:

Keep, ancient lands, your storied pomp!” cries she
With silent lips. “Give me your tired, your poor,
Your huddled masses yearning to breathe free,
The wretched refuse of your teeming shore.
Send these, the homeless, tempest-toss’d to me,
I lift my lamp beside the golden door!

Unfortunately, we in the U.S. have failed to elect leaders who reflect the best of who we are. It is something we need to keep firmly in mind this election cycle.

In the meantime, Canada is now the “Shining City on the Hill” for those fleeing the misery and violence of their homeland, seeking a second chance in a land of peace and freedom. Canadian ex-pat and writer Guy Lawson recently published a profile on Trudeau in the New York Times, in which he explains how Canada’s new Prime Minister is reshaping his nation with the support of President Obama. Lawson will be appearing on Ring of Fire, airing on Free Speech TV next week, where he will discuss his exclusive interview with Prime Minister Trudeau.