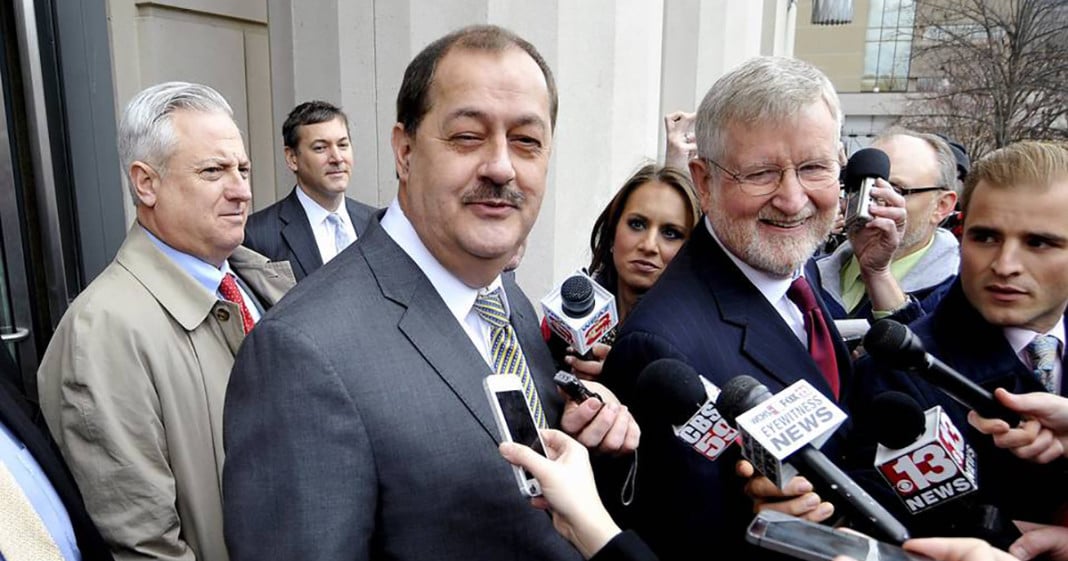 Mass murderer Don Blankenship has the blood of 29 men on his hands – and for that, he got a slap on the wrist.

Blankenship, former chairman and CEO of Massey Energy, was indicted over a year ago by a federal grand jury on four serious charges. They consisted of conspiracy to violate federal mine safety and health regulations, conspiracy to obstruct government mine safety inspectors, making false statements to the Securities and Exchange Commission, and securities fraud.  According to prosecutors, these crimes were contributing factors in the fatal explosion at the Upper Big Branch coal mine in 2010. Altogether, those crimes carried a penalty of 31 years in a federal prison.

Had he simply been a small business owner, 65-year-old Blankenship would have been looking at spending the rest of his life behind bars. Instead, the federal jury acquitted this monster on all but one of the charges. Blankenship was found guilty of conspiracy to willfully violate federal mine safety standards – a misdemeanor carrying a maximum one year prison sentence.

That’s all the lives of 29 mine workers were worth. They were working men who had wives, children, brothers and sisters, parents and friends. They had hopes and dreams. They had lives. And they were sacrificed just so this bastard, this blood-sucking freak of nature, could add a few more dollars to his bottom line.

After the jury announced the verdict, U.S. District Attorney Booth Goodwin proclaimed it a “landmark day for the safety of coal miners.” Former West Virginia governor and current Senator Joseph Manchin told the media that the verdict brings “some measure of justice to one of the most tragic mining disasters in recent history.”

Families of the victims beg to disagree. They’re calling it a gross miscarriage of justice. One woman, whose brother died in the mine explosion five-and-a-half years ago, told Blankenship, “Although you may not be judged responsible by the courts of this land, you are guilty…the blood of these 29 people is on your hands.” Another woman, who lost her 25-year-old son in the explosion, said she was “very hurt” by the verdict. “To think that that man could still walk the streets and keep that smile on his face knowing what he did to my son,” she added.

Blankenship’s response? A wink and a nod, followed by a hearty laugh. Despite the light sentence, Blankenship’s defense counsel, William Taylor expressed “disappointment” in the verdict, saying, “The case should never have been brought.”

So, aside from the fact that Don Blankenship is part of the elite 2% who are above the law that the rest of us must live under, how is it that the jury allowed him to get off so easily?

The short answer: lack of evidence. Like most corporate criminals, Blankenship is nothing if not cunning. There was no paper trail, and in his recorded telephone conversations, he worded his phrases very carefully. In closing arguments, assistant prosecutor Steven Ruby said:

The defendant wants you to reward him for being smart enough not to come right out and say, ‘I want you to break the law’…he wants you to let him off the hook because he was careful enough to come right up to the line of putting it explicitly, putting it into words without doing it. Don’t do that.

Unfortunately, that is exactly what the jury did.

Blankenship’s defense attorney may have hit the proverbial nail on the head during his own closing argument:

We don’t convict people in this country on the basis of maybes…we don’t convict them of crimes because they are rich or they are rude or they are tough. We require the government to prove more than that a man was in charge of a company when a terrible tragedy occurred” (emphasis added).

Readers, take note of that statement: “We don’t convict them of crimes because they are rich.” William Taylor may have unintentionally spoken a profound and painful truth. It echoes what novelist and  Los Angeles Police Department veteran Joseph Wambaugh wrote: “A rich man’s prank is a poor man’s felony.”

In this case, Blankenship’s prank cost 29 lives and destroyed their families.