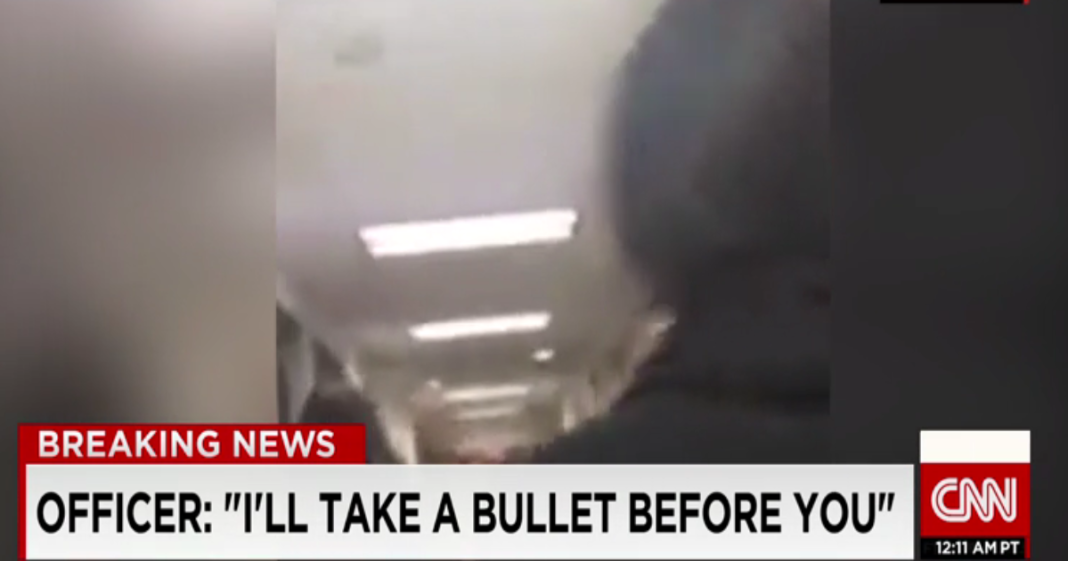 A police officer is being hailed as a hero after Wednesday afternoon’s shooting in San Bernardino, California where 14 were killed and 21 were wounded.

The officer was one of many who stormed the Inland Regional Center to hunt for gunmen and assist in evacuating employees in the massive building.

The unnamed officer led the line of Center employees to the exit, attempting to calm the terrified people.

“Try to relax, everyone. Try to relax. I’ll take a bullet before you do, that’s for damn sure”

Luckily the officer and the employees he escorted escaped the massacre with their lives. This is the type of heroism we hope to see in our police officers, though we also hope that this sort of sacrifice is never needed.

Scene from inside building at San Bernardino shootingSan Bernardino Police confirmed that at least 14 people are dead and 17 people have been injured in the mass shooting in San Bernardino Wednesday. Police say there were up to three suspects who may have left the area in a dark-colored SUV. “They came prepared to do what they did as if they were on a mission,” said San Bernardino Police Chief Jarrod Burguan.Gabi Flores gave us permission to post this video from inside the Inland Regional Center, where the shooting took place. She is Consumer Services Coordinator there. In the video, you can see an officer leading the group to safety. At one point, he says: “Try to relax, try to relax. I’ll take a bullet before you do, that’s for damn sure.”Here’s everything we know so far: http://kp.cc/1NHW0Qj