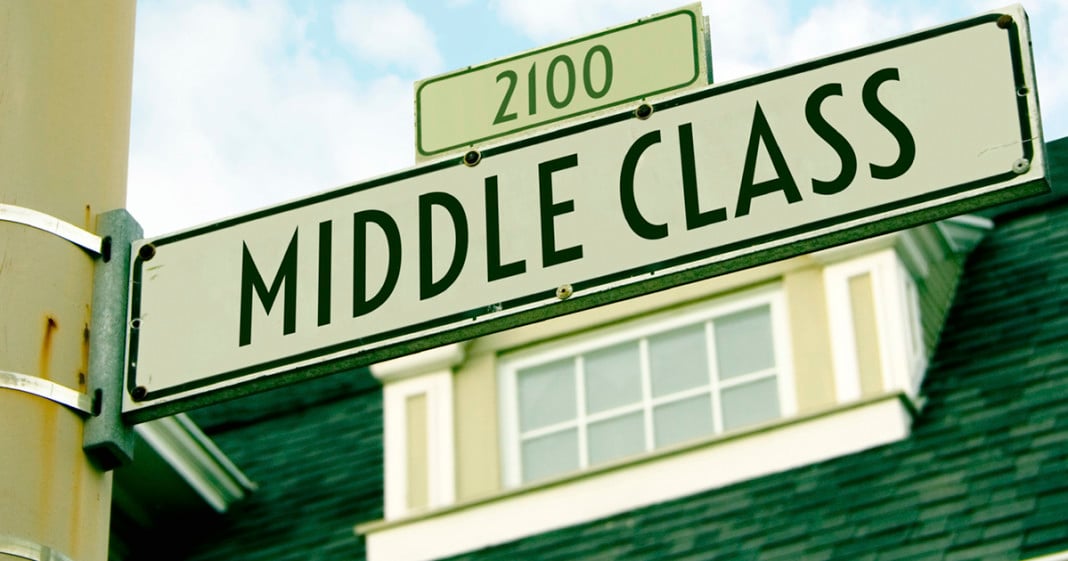 Bernie Sanders has been sounding the alarm for years – as has the Progressive media. The middle class, that bedrock of U.S. society from the end of the Second World War until the ascendancy of Reagan and the twisted economic policy that was a result, is dying off. In its place: a very small, moneyed elite, wallowing in wealth and opulence, and a huge class of the poor, struggling to survive on crumbs. Now that Bernie Sanders’ campaign has finally brought this issue to the front-and-center, even the mainstream corporate media can no longer ignore it. This past week, CBS News published an article entitled “Seven Signs That You’re Dropping Out of The Middle Class.”

Those seven signs aren’t news to those who regularly follow Progressive media. They include declining incomes, lack of or inability to afford a college degree, having to draw on savings in order to meet expenses, having to work more than one job, no benefits, inability to afford a vacation, and using credit in order to pay bills – all of which lead to the seventh sign, which is constant stress and worry about falling behind.  The report is spot-on and well written, but there are a few issues.

First of all, the title is wrong. With the exception of a few who decide to go “off the grid” or are choosing a simpler lifestyle, nobody “drops out” of the middle class. Since the ascendancy of Reagan and his neo-conservative successors, there has been a vicious, cruel, no-holds-barred war on the 98%, the objective of which has been to forcibly push people out of the middle class. In that respect, the CBS news story is totally off the mark. Furthermore, the very title is condescending; in the great tradition of neo-cons and their corporate media masters, it suggests that it is our fault. We somehow “choose” to drop out of the middle class.

Finally, while the CBS story does an excellent job of describing the symptoms of America’s self-inflicted economic disease in all its lurid details, it carefully avoids mentioning the underlying causes. Yes, we are all painfully aware of how incomes for 98% of us have fallen even as we work harder and longer hours (while income for the top 2% have exploded even as they produce little or nothing of real value). We know that a college education has become unaffordable for most of us, and those who do manage to earn a degree do so by incurring a lifetime of debt servitude. We know full well that the vast majority of Americans “are under more financial pressure than ever before and have less optimism about their ability to improve their financial status,” as the article states.

But there isn’t much information as to why and how this ongoing collapse of the middle class is happening. Of course, we shouldn’t be surprised that the mainstream corporate media would not go into the causes of the problem to which it has contributed in no small measure. That contribution consists largely of the way media has succeeding in “dumbing down” the American people, keeping us misinformed, distracted and even deceived. As a result, people have either continued to vote against their own best interests, electing leaders that are little more than whores for corporate and billionaire pimps like David and Charles Koch – or they have been convinced that they have no power and no voice. They buy into the meme about how “government is the problem,” and have accepted the lie that the unfettered “private free market,” unburdened by “regulations,” will take care of everything. Too many people have also bought into the lie that their economic failures are due to their own shortcomings – or that it is somehow the natural order of things to have a vast underclass dominated and exploited by a minuscule but powerful, manipulative, avaricious and self-serving ruling elite.

Of course, after a generation of decline, such lies are being exposed for what they are. The “private free market,” with very few exceptions, has done nothing but serve itself and its own interests at the expense of the rest of us. At the same time, the self-styled “rulers of the Universe,” the billionaire class, uses its wealth to buy politicians who allow them to rig the system by writing their own legislation – an issue that is finally uniting liberals and conservatives.

It also comes as little surprise that the CBS article fails at (or deliberately avoids) providing any real solutions. The government of Iceland recently made an excellent start by throwing banking executives in prison. It’s something that even former Federal Reserve chairman Ben Bernacke has said needs to happen here in the U.S. However, that is not going to happen under the status quo. Presidential candidate Bernie Sanders has outlined a ten-point plan to turn things around for the middle calls – but as Sanders himself acknowledges, electing a social democrat to the Oval Office by itself will not be enough. It’s going to take tremendous pressure on lawmakers from an outraged electorate willing to exercise its rights on election day.

In that sense, there may be some truth to the idea that the decline of America’s middle class is our own doing. What too many have failed to understand is that the electorate is the 98%. For all their wealth and power, the billionaire class represents a very small minority – and FEC v. Citizens United notwithstanding – corporations are not living breathing humans, at least not without such human decision makers to give them “life.”

It’s time to shake off our complacency. At this point, it’s about more than just the collapse of the middle class. Our very existence as a democracy is at stake.