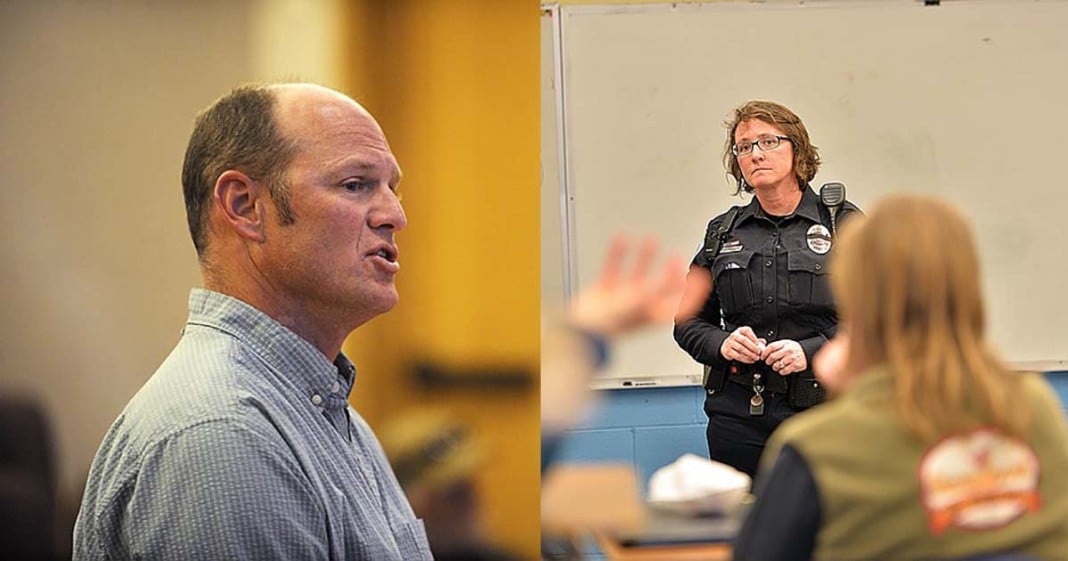 It’s a story that has become far too common these days. A company, an organization or a public agency becomes infected with corruption and a culture of abuse, even going so far as to violate the law. A conscientious insider attempts to bring this misconduct to public attention, and his or her superiors retaliate through intimidation, legal threats and more. Case in point: the Steamboat Springs Police Department.

School Resource Officer Kristin Bantle and Detective Dave Klieber were law enforcement officers who took their jobs and their mission to serve and protect the public seriously. For many years, both officers performed their duties to the best of their abilities. Officer Bantle, who has been in law enforcement since 1999, was well-liked by students as well as teachers and parents at the schools where she served.

When Bantle was hired on with the SSPD in 2011, she was in for a rude surprise. In an open letter to the city council, dated March 25th of this year, she wrote: “I first sensed something was wrong when two officers were dismissed at my first staff meeting. This was a red flag…at my interview, the Chief of Police told me turnover was very rare.”

Since Bantle started with the department, fifteen officers have left for one reason or another. There were more concerns. Chief Joel Rae refused to have video recording devices installed in patrol cars, stating, “over my dead body will we have cameras.” Bantle was also expected to learn Krav Maga, a particularly aggressive and brutal form of mixed martial arts developed by the Israeli Army (the term is Hebrew for “contact combat”). “I was uncomfortable with the level of force I was being trained in,” she wrote. At the same time, the department failed to provide “de-escalation training.” According to Bantle, there was little supervision, little transparency, and “leadership that breeds an ‘Us against Them’ ethos.”

That wasn’t the worst of it. Former Detective Klieber reported that, since his appointment as police chief in January 2012, Joel Rae “imparted his values of sexism, intolerance, bigotry, incompetence and bullying,” as well as a practice he calls “for-profit policing.” This consisted of quotas and “surcharges” on citations as well as the harassment of law-abiding citizens and arrests on trumped-up charges. According to Klieber, officers were evaluated on how many citations they issued and how much money they generated for the department.

When Officer Bantle finally went public, the response was swift and brutal. She was investigated over allegedly making a false statement on a job application to the Routt County Sheriff’s Department. Eventually, the county district attorney charged Bantle with attempting to influence a public official – a Class 4 felony under Colorado statutes. On the day she appeared in court for a preliminary hearing, Bantle received notice that her services at the SSPD were no longer required. Her trial is scheduled to begin on December 1st.

Similar charges have been filed against Klieber as well. Attorneys for defendants Bantle and Klieber agreed that the prosecution’s cases against their clients are weak – and are blatant attempts to punish them for coming forward. Charles Feldmann, who represents Klieber, told the local newspaper, “It just smells as kind of a witch hunt, or what I would call classic government retaliation against a whistleblower.”

At the same time, Bantle’s legal counsel, Kris Hammond, is unimpressed with the charge against his client. He’s had some experience representing clients charged with similar crimes under the Colorado law against influencing public servants. That statute under the Centennial State’s criminal code is broadly defined and has been applied by prosecutors in questionable ways. Hammond told a local reporter, “It’s just a misuse of the charge.” He added, “I don’t know of one case where this charge has made it past halftime at a trial.”

Even if Bantle and Klieber are vindicated – as seems likely – they have both been subject to harassment and stress, simply for doing the right thing. Their revelations led to the resignation of Police Chief Rae this past July, but the reprisals against Bantle and other department whistleblowers are ongoing – indicating that the corruption goes beyond the walls of the precinct.

Federal law provides protections for whistleblowers, but statutes as well as common law precedents are complicated and do not apply in all cases. In Garcetti v. Ceballos, the U.S. Supreme Court ruled that government employees are not always protected under whistleblower laws: “When public employees make statements pursuant to their official duties, they are not speaking as citizens for First Amendment purposes, and the Constitution does not insulate their communications from employer discipline.”

Nonetheless, according to defense council in these cases, the charges are contrived to punish their clients and are unlikely to stand. Still, it is disturbing that public servants are still vulnerable to attack when they attempt to protect the public by exposing corruption and misconduct.

The fact remains that, when it comes to treating the disease of corruption, sunshine is still the best disinfectant. We at The Ring of Fire applaud the courageous actions of Kristin Bantle and Dave Klieber – and hope others will follow their example.