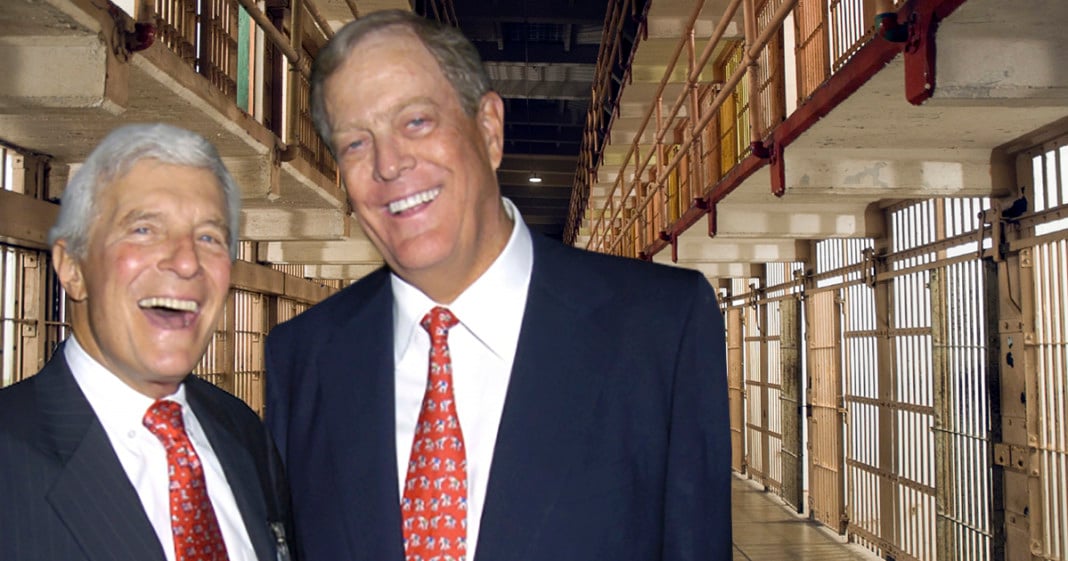 It looks like the Koch brothers have scammed us once again.

When news first came out that Charles and David Koch — the Koch brothers — were supporting criminal justice reform efforts in Congress, many of us thought, “Wow, they’re actually doing something good for once.”

And for good reason, too.

Criminal justice reform has, over the past few years, become one of the very few legitimately bipartisan issues in American politics, and given their public statements, it really looked like the Kochs were joining that bipartisan consensus for all the right reasons.

Here, for example, is Charles Koch on a recent episode of Morning Joe talking about why we need to reform drug laws.

Boy were we naïve.

Charles and David Koch may very well want to change drug laws, but the idea that they’re making this push for criminal justice reform out of the goodness of their own hearts appears to be totally and completely false.

After all the publicity they’ve gotten from the media and the D.C. establishment, it now turns out that the Kochs appear to want to change sentencing laws to help protect potential white collar criminals like, well, themselves or their buddies.

As the New York Times reported Wednesday, Koch Industries are backing as part of a package of criminal justice reform legislation a bill that would change the way the feds can use a legal doctrine known as “mens rea” in white collar cases.

If the bill passes, white collar criminals could get away with breaking the law if they can simply say that they “didn’t know” they or their business and colleagues were breaking the law when committing the crime in question.

They can’t do this now — it’s that whole “ignorance of the law is no excuse” thing.

And while this whole issue of “did they or didn’t they know” might sound like a minor bit of legal esoterica, it’s not.

The power to convict someone of committing a crime regardless of whether or not they knew they were breaking the law when they committed that crime is an important tool for prosecutors, especially in white collar cases.

Justice Department officials, for example, told The New York Times that not having this tool might have prevented them from getting guilty pleas in a 2013 case involving a Colorado factory farm whose listeria-infected cantaloupes killed 33 people, as well as a 2012 case involving a pharmacy that killed 3 people by selling them mislabeled drugs.

In other words, letting white collar criminals claim ignorance of the law as a defense would make it really easy for them to get away with, well, murder. And, yes, according to the New York Times, that’s what the Kochs are proposing.

So yeah, this is a big deal.

It also turns out that the Koch brothers have a very personal reason for supporting these kinds of changes to federal criminal law.

As The New York Times reports, Koch Industries’ general counsel and senior vice president Mark Holden “acknowledge[s]… that the company’s efforts to pursue revisions in federal criminal law were inspired in part by a criminal case filed 15 years ago against Koch Industries claiming that it covered up releases of hazardous air pollution at a Texas oil refinery. Those charges resulted in a guilty plea by the company and a $20 million penalty.”

As usual, the Kochs are just looking out for themselves.

And the sad thing is that even if they do really care about changing drug sentencing laws, their push to let white collar criminals off the hook could sabotage the efforts going on in Congress right now to make real change to our criminal justice system.

Ever since John D. Rockefeller started handing out shiny new dimes to children to enhance his Robber Baron image, rich people have been trying to portray themselves as concerned about average people as part of a ploy to protect their own privilege.

It really is as simple and dirty as that.

Welcome to life in the best democracy money can buy.