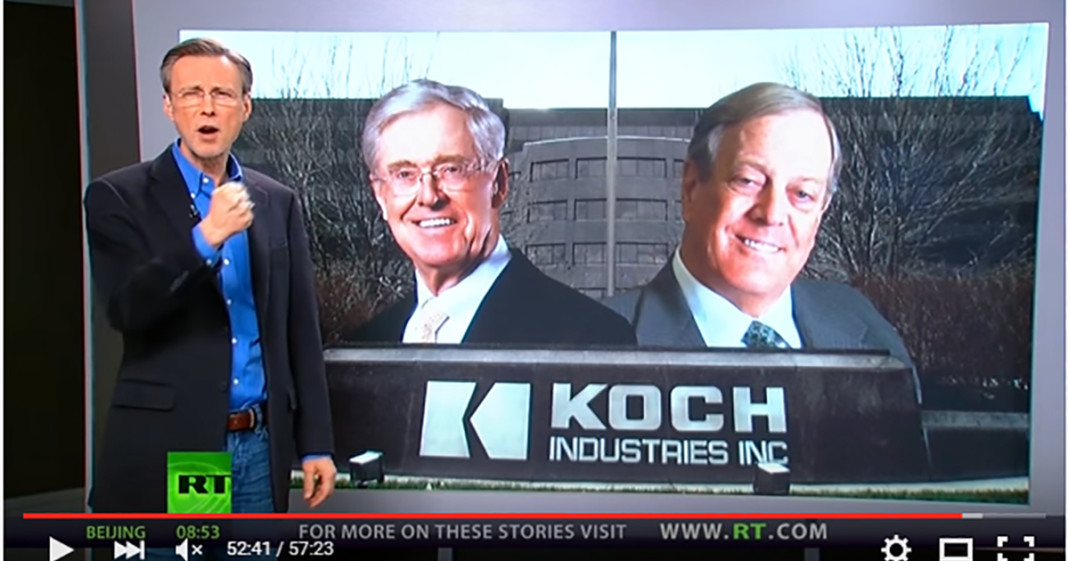 Tonight’s Rumble discusses the release of the Chicago police dashcam video showing the killing of a black teenager, Kasich’s new ad attacking Trump’s fascism, and whether the GOP has given up on the youth vote. Thom talks the life and death of artist Mark Lombardi with journalist Patricia Goldstone, author of “Interlock: Art, Conspiracy, and the Shadow Worlds of Mark Lombardi,” and in tonight’s Daily Take Thom discusses how the Koch brothers have duped us once again.

Rumble: Aren’t all of the cops who helped this cover-up really “bad cops”?
Medea Benjamin, Global Exchange/CODEPINK/Drone Warfare & Kris Ullman, Conservative Commentator & Activist & Kevin Martin, Project 21 joins Thom. It’s been a day since the dashcam footage was released showing the execution-style shooting of 17-year-old Laquan McDonald in Chicago. But with more and more evidence that there was a concerted cover-up in the police department – why is Officer Van Dyke the only one facing charges. Aren’t all of the cops who helped in this cover-up really “bad cops”? And shouldn’t they all be held accountable for the conspiracy? Also – are we ready to admit that this problem is systemic and not just endemic to any one town or city?

When Art, Politics & Conspiracy Collide
Patricia Goldstone, Interlock: Art, Conspiracy, and the Shadow Worlds of Mark Lombardi joins Thom. Lots of people like to lay out complex networks and connections of people and organizations who are behind certain conspiracies. We’ll be talking about one man who made those connections into an art.

Really! How Do You Know a Politician is Lying?
Steven Gaffney, Steven Gaffney Company/Be a Change Champion… Mastering Momentum joins Thom. Politics – like law – banking – or business – is a dirty game – and sometimes good guys need to do bad things to win. That’s the idea – at least. But what if everything we’ve been told about lying and communication is wrong?

The Good, the Bad & the Very, Very Gallionicly Ugly!
Kimberly Guilfoyle. On the September 24 edition of the O’Reilly Factor – a panel apparently taking the side of white supremacists was dragging out tired tropes about interracial violence in America. The panel was pretty appalling by itself – but Kimberly Guilfoyle and Lis Wiehl decided to take everything a step further when they declared that Black Lives Matter is a “hate group.” This isn’t just absurd – it’s completely tone deaf considering that the panel was being held just one night after a group of alleged white supremacists opened fire into a crowd and shot five peaceful Black Lives Matter protestors. The whole discussion of “the decades-long problem of black on white violence” is ugly. But the fact that Fox is sowing fear and scaring their viewers into believing that the non-violent black lives matter movement is a “hate group” because they’re protesting being killed by police on a near-daily basis?

Why the Kochs Really Embraced Criminal Justice Reform…
The Koch Brothers aren’t being totally honest about what’s behind their newfound love for criminal justice reform.