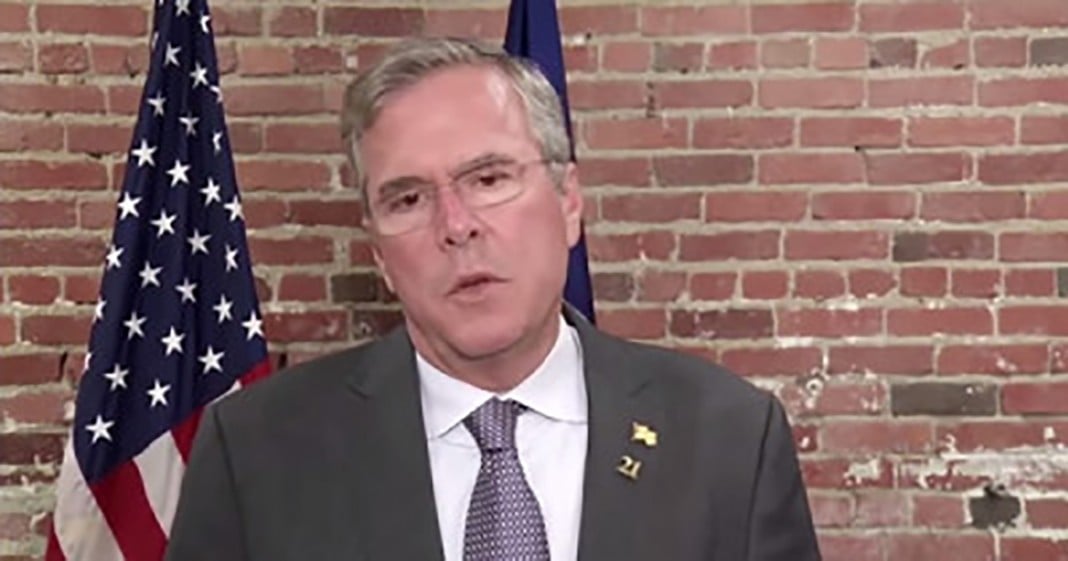 Jeb Bush’s campaign has been in trouble since its start and for good reason. In fact, Jeb’s poor polling with Floridians, his former constituents, may be the best proof that voters who have had the Jeb experience don’t want it again.

It’s a fact that Jeb’s campaign is trying to counteract. Jeb’s spokesman, Tim Miller said, on Twitter, “FYI political press corps. Jeb’s going to have a few weeks of bad polls. Comebacks take time, we recognize and are prepared for that.”

And then the numbers started coming in, as Truthdig reports:

[…] the Bay News 9 / News 13 Florida Decides Poll was released, placing Bush in a staggeringly weak position in his home state. Bush won the support of only 7 percent of Florida GOP primary voters in the automated SurveyUSA poll in the state where he had won two elections and narrowly lost a third.

He was 30 points behind front-runner Donald Trump (also a Florida resident, part-time). He had less than half the support of Sen. Marco Rubio (R-Fla.). In almost every demographic breakdown, he staggered into fifth place. His best demographic? Non-Cuban Hispanic voters, Donald Trump was their first choice; Jeb Bush was their third.

Miller’s warnings aside, it is exceedingly rare for a home-state favorite to fall so low. You can split hairs and point out that Sen. Lindsey Graham (R-S.C.) polls badly in his home state, or that former Maryland governor Martin O’Malley is polling third in the state he ran until this this year.

But a candidate of Bush’s stature – an established favorite, the race’s fundraising leader – rarely bombs like this. In 2012, there were very few polls of the Massachusetts presidential primary, but former governor Mitt Romney led them by an average of 46 points. In 2008, even before he won the Iowa caucuses (i.e. in the period when then-New York Sen. Hillary Clinton was the national poll leader), then-Sen. Barack Obama always held leads in Illinois.

State polling, while more relevant to the actual primaries than the national polls, is patchy. Yet Bush isn’t just struggling in Florida now. Not since July has he led a poll in the state he governed for eight years (as you can read about in his e-book, “Reply All!”). In a Mason-Dixon poll taken before the rise of Trump, Bush enjoyed 28 percent support – ominously weaker than Romney, but understandable with a sitting Florida senator also in the race.

Since then, as Bush cratered, his campaign put together a PowerPoint – helpfuly leaked to reporter Dave Catanese – full of reasons why he could come back. In a section titled “Those Closest To Marco Choose Jeb,” the campaign boasted that Bush led Rubio in congressional endorsements from the state by a 11-1 margin and led just as big in endorsements from Florida legislators.

What’s that been worth? Fifth place.

For more on this, read the article from the Washington Post titled: “Jeb Bush’s poll numbers in Florida are unprecedentedly bad.“