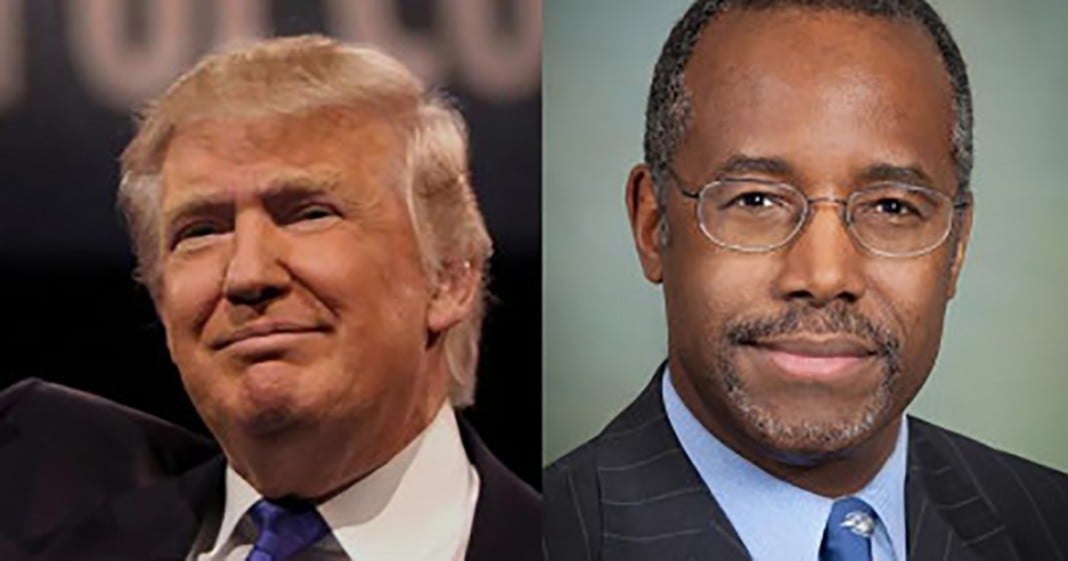 This article originally appeared on AlterNet.

Ben Carson’s feeble attempt to equate Hitler and pro-gun control Democrats was short-lived, but along with the announcement that Marco Rubio has brought in his second big supporting billionaire, it brings to mind the first American vice-president to point out the “American fascists” among us.

In early 1944, the New York Times asked Vice-President Henry Wallace to, as Wallace noted, “write a piece answering the following questions: What is a fascist? How many fascists have we? How dangerous are they?”

Vice-President Wallace’s answer to those questions was published in the New York Times on April 9, 1944, at the height of the war against the Axis powers of Germany and Japan.

“With a fascist the problem is never how best to present the truth to the public but how best to use the news to deceive the public into giving the fascist and his group more money or more power.”

In this, Wallace was using the classic definition of the word “fascist”—the definition Mussolini had in mind when he claimed to have invented the word. (It was actually Italian philosopher Giovanni Gentile who wrote the entry in the Encyclopedia Italiana that said: “Fascism should more appropriately be called corporatism because it is a merger of state and corporate power.” Mussolini, however, affixed his name to the entry, and claimed credit for it.)

As the 1983 American Heritage Dictionary noted, fascism is, “A system of government that exercises a dictatorship of the extreme right, typically through the merging of state and business leadership, together with belligerent nationalism.”

In 1938, Mussolini brought his vision of fascism into full reality when he dissolved Parliament and replaced it with the Camera dei Fasci e delle Corporazioni—the Chamber of the Fascist Corporations. Corporations were still privately owned, but now instead of having to sneak their money to folks like Tom DeLay and covertly write legislation, they were openly in charge of the government.

Vice-President Wallace bluntly laid out in his 1944 Times article his concern about the same happening here in America:

“If we define an American fascist as one who in case of conflict puts money and power ahead of human beings, then there are undoubtedly several million fascists in the United States. There are probably several hundred thousand if we narrow the definition to include only those who in their search for money and power are ruthless and deceitful. … They are patriotic in time of war because it is to their interest to be so, but in time of peace they follow power and the dollar wherever they may lead.”

Nonetheless, at that time there were few corporate heads who’d run for political office, and in Wallace’s view, most politicians still felt it was their obligation to represent We The People instead of corporate cartels.

“American fascism will not be really dangerous,” he added in the next paragraph, “until there is a purposeful coalition among the cartelists, the deliberate poisoners of public information….”

In Sinclair Lewis’s 1935 novel It Can’t Happen Here a conservative southern politician is helped to the presidency by a nationally syndicated radio talk show host. The politician, Buzz Windrip, runs his campaign on family values, the flag and patriotism. Windrip and the talk show host portray advocates of traditional American democracy as anti-American.

When Windrip becomes president, he opens a Guantanamo-style detention center, and the viewpoint character of the book, Vermont newspaper editor Doremus Jessup, flees to Canada to avoid prosecution under new “patriotic” laws that make it illegal to criticize the President.

As Lewis noted in his novel, “the President, with something of his former good-humor [said]: ‘There are two [political] parties, the Corporate and those who don’t belong to any party at all, and so, to use a common phrase, are just out of luck!’ The idea of the Corporate or Corporative State, Secretary [of State] Sarason had more or less taken from Italy.”

And, President “Windrip’s partisans called themselves the Corporatists, or, familiarly, the ‘Corpos,’ which nickname was generally used.”

Lewis, the first American writer to win a Nobel Prize, was world famous by 1944, as was his book. And several well-known and powerful Americans, including Prescott Bush, had lost businesses in the early 1940s because of charges by Roosevelt that they were doing business with Hitler.

These events all, no doubt, colored Vice-President Wallace’s thinking when he wrote:

“Still another danger is represented by those who, paying lip service to democracy and the common welfare, in their insatiable greed for money and the power which money gives, do not hesitate surreptitiously to evade the laws designed to safeguard the public from monopolistic extortion. American fascists of this stamp were clandestinely aligned with their German counterparts before the war, and are even now preparing to resume where they left off, after ‘the present unpleasantness’ ceases.”

Fascists have an agenda that is primarily economic. As the Free Dictionary (www.thefreedictionary.com) notes, fascism/corporatism is “an attempt to create a ‘modern’ version of feudalism by merging the ‘corporate’ interests with those of the state.”

Feudalism, of course, is one of the most stable of the three historic tyrannies (kingdoms, theocracies, feudalism) that ruled nations prior to the rise of American republican democracy, and can be roughly defined as “rule by the rich.”

Thus, the neo-feudal/fascistic rich get richer (and more powerful) on the backs of the poor and the middle class, an irony not lost on author Thomas Frank, who notes in his book What’s The Matter With Kansas that, “You can see the paradox first-hand on nearly any Main Street in middle America—’going out of business’ signs side by side with placards supporting George W. Bush.”

The businesses “going out of business” are, in fascist administrations, usually those of locally owned small and medium-sized companies. As Wallace wrote, some in big business “are willing to jeopardize the structure of American liberty to gain some temporary advantage.”

“Monopolists who fear competition and who distrust democracy because it stands for equal opportunity would like to secure their position against small and energetic enterprise [companies]. In an effort to eliminate the possibility of any rival growing up, some monopolists would sacrifice democracy itself.”

But American fascists who would want former CEOs as president, vice-president, House Majority Whip, and Senate Majority Leader, and write legislation with corporate interests in mind, don’t generally talk to We The People about their real agenda, or the harm it does to small businesses and working people.

Instead, as Hitler did with the trade union leaders and the Jews, they point to a “them” to pin with blame and distract people from the harms of their economic policies.

In a comment prescient of Alabama’s recent closing of every drivers’ license office in every Alabama county with more than 75% black residents (while recently passing a law requiring a drivers’ license or similar ID to vote), Wallace continued:

“The symptoms of fascist thinking are colored by environment and adapted to immediate circumstances. But always and everywhere they can be identified by their appeal to prejudice and by the desire to play upon the fears and vanities of different groups in order to gain power. It is no coincidence that the growth of modern tyrants has in every case been heralded by the growth of prejudice. It may be shocking to some people in this country to realize that, without meaning to do so, they hold views in common with Hitler when they preach discrimination…”

But even at this, Wallace noted, American fascists would have to lie to the people in order to gain power. And, because they were in bed with the nation’s largest corporations – who could gain control of newspapers and broadcast media—they could promote their lies with ease.

“The American fascists are most easily recognized by their deliberate perversion of truth and fact,” Wallace wrote. “Their newspapers and propaganda carefully cultivate every fissure of disunity, every crack in the common front against fascism. They use every opportunity to impugn democracy.”

In his strongest indictment of the tide of fascism, the vice-president of the United States saw rising in America, he added:

“They claim to be super-patriots, but they would destroy every liberty guaranteed by the Constitution. They demand free enterprise, but are the spokesmen for monopoly and vested interest. Their final objective toward which all their deceit is directed is to capture political power so that, using the power of the state and the power of the market simultaneously, they may keep the common man in eternal subjection.”

This liberal vision of an egalitarian America in which very large businesses and media monopolies are broken up under the 1890 Sherman Anti-Trust Act (which Reagan stopped enforcing, leading to the mergers & acquisitions frenzy that continues to this day) was the driving vision of the New Deal (and of “Trust Buster” Teddy Roosevelt a generation earlier).

As Wallace’s president, Franklin D. Roosevelt, said when he accepted his party’s renomination in 1936 in Philadelphia, “…out of this modern civilization, economic royalists [have] carved new dynasties…. It was natural and perhaps human that the privileged princes of these new economic dynasties, thirsting for power, reached out for control over government itself. They created a new despotism and wrapped it in the robes of legal sanction…. And as a result the average man once more confronts the problem that faced the Minute Man….”

Speaking indirectly of the fascists Wallace would directly name almost a decade later, Roosevelt brought the issue to its core:

In the election of 2016, we again stand at the same crossroad Roosevelt and Wallace confronted during the Great Depression and World War II.

It’s particularly ironic that the “big news” is which billionaire is supporting which Republican candidate. Like Eisenhower’s farewell address, President Roosevelt and Vice-President Wallace’s warnings are more urgent now than ever before.