What is going on at Fox News? Recently, there has been several situations where one Fox hosts has challenged others, basically calling them hypocrites. Is there an internal rebellion taking place within Fox News or is it an intentional act by Fox News to test the waters to see how many right-wing nut jobs they will lose if they begin softening their message?

A few days ago, several Fox hosts were criticizing Pope Francis for entering political discussions, which they found offensive because the Pope was emphasizing problems with American capitalism and the failure to address climate change. Shepard Smith, another Fox hosts, had enough of his colleagues and stated:

I think we are in a weird place in the world when the following things are considered political. Five things, I’m going to tick them off. These are the five things that were on his and our president’s agenda. Caring for the marginalized and the poor — that’s now political. Advancing economic opportunity for all. Political? Serving as good stewards of the environment. Protecting religious minorities and promoting religious freedom globally. Welcoming [and] integrating immigrants and refugees globally. And that’s political?

During his monologue, Smith indirectly called out his Fox News colleagues because he questioned the morality of those who are “on the other side” of those issues.

People who find themselves on the other side of that message should consult a mirror, it seems like. Because I think that’s what we’re supposed to do as a people, whatever your religion. I mean, it seems to me and I think to probably, as Bill O’Reilly would put it, most clear-thinking Americans — that that’s how we’re supposed to roll.

Two days ago, Fox Business host Charles Gasparino complained that wealthy donors who contributed to the renovation to St. Patrick’s Cathedral in New York only got “good” seats instead of “great” seats. Appalled by his colleague’s statement, Fox News host Neil Cavuto called the “concern” of these wealthy donors “pathetic.”

Well, did they give a lot of money to the cathedral to get good seating if the pope comes to town or did they do it out of the goodness of their (hearts)? … These guys sound very smarmy, and they give capitalists a bad name, Gaspo.

Two weeks ago, Shepard Smith also went off on Kim Davis and her followers:

Well they set this up as a religious play again. This is the same crowd that says ‘we don’t want Sharia law. Don’t let them come in here and start telling us what to do. Keep their religion out of our lives and out of our government.’ Well here we go again.

When this started, this lawyer said he needed an accommodation for a woman who wanted one. She said she didn’t want her name on a license — but — for gay people. They couldn’t come up with an accommodation. Now they’ve come up with one, they’ve let her out of jail, said ‘all right, you don’t have to have your name on there, just put the name of the county on there. All this is done.’ But it’s not what they want. You’re hearing now what they want.

This is what they want, and this is what they’re going to get. They’re gonna get a stirred-up argument and a couple of days of the news cycle and they’re gonna be able to make these claims — and the truth is when you get right down to the fundamentals of this, the Supreme Court of the United States says that you can’t have things being okay for one group of people and not okay for another group of people.

This is not unprecedented. They did it when they said that black and white people couldn’t marry. And they said oh, wait, I guess you can. And now they’ve said straight people and gay people can also all get married. You want to get married? Go right at it. The government’s not going to get in the way of you anymore than they did in the way of straight people back in the day.

But haters are going to hate. And we thought that what this woman wanted was an accommodation, which they’ve now granted her — something that worked for everybody, but it’s not what they want. This is what they want.

You and President Bush, the Bush-Cheney administration, dealt with Iran for eight years, and I think it was fair to say that there was never any real, serious military threat. Iran went from zero known centrifuges in operation to more than 5,000. So in fairness, didn’t you leave — the Bush-Cheney administration — leave President Obama with a mess?”

It’s impossible to know at this point what is going on internally at Fox News. However, it will be interesting to watch, and see if this is purposeful on Fox’s part or whether there is an internal rebellion building within the organization. 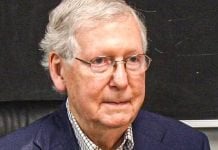