Cenk Uygur and Ana Kasparian of The Young Turks slam Kim Davis for continuing to refuse authorizing same-sex marriage licenses. Even if her deputies are now allowed to issue those licenses, Davis is defiant about including her name. Yet, she is still getting paid $80,000 per year for not doing her job.

“You’re standing in the way of people getting married because you think that your morality is more important than anything else. Mind you, you’ve been married four times,” Kasparian fires back. Uygur adds to the point that Davis is just like racists, of the past, who wanted to protect their right to discriminate, “Same exact guys who stood in the way of integration.” He explains that Davis belongs to that group of people because she’s playing victim. It only proves that ignorance has no bounds. 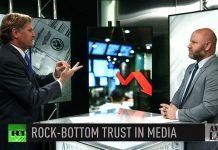