This week, the Securities & Exchange Commission made a grand announcement:

Two Citigroup affiliates have agreed to pay nearly $180 million to settle charges that they defrauded investors in two hedge funds by claiming they were safe, low-risk, and suitable for traditional bond investors.  Citigroup Global Markets Inc. and Citigroup Alternative Investments LLC (CAI) agreed to bear all costs of distributing the $180 million in settlement funds to harmed investors.

Let’s put this in perspective. Suppose an average, middle-class taxpayer deliberately cheated on his returns and willfully defrauded the government of $10,000. The IRS discovers the fraud, and allows the taxpayer to settle the debt for $600 – no questions asked, and no other penalties involved. What are the chances of that? Zero!

This is the generous gift that the SEC handed Citigroup this week. The Wall Street investment banking corporation deliberately and knowingly defrauded its customers of $3 billion over a five-year period – and is being allowed to settle for a mere six cents on the dollar. According to the SEC press release, Citigroup continued to accept investors’ funds even as those investments were collapsing.

Citigroup represented the hedge funds as “low-risk, well-capitalized investments with adequate liquidity,” primarily to retirees with low risk tolerance. In reality, they were highly leveraged. Essentially, this is a strategy in which investments are made with borrowed money. It is similar to the practice of buying stocks “on margin,” which was a contributing factor to the Stock Market Crash of 1929. The two Citigroup hedge funds at the center of the case, ASTA/MAT and Falcon, were leveraged with mortgage-backed securities, bank loans and other risky debt instruments. When the crash finally came in 2008, the value of both funds plummeted.

It was a risk of which Citibank brokers and advisers were well aware – and yet, they continued to assure clients that the investments were solid. Of course, the devil was in the fine print, which Citigroup is invoking in order to avoid lawsuits. The $180 million figure is a settlement offer to keep litigation at bay; Citigroup is not admitting any wrongdoing.  Defrauded investors who accept the offer will forfeit their right to sue. So far, at least one investor, who lost hundreds of thousands of dollars, has refused the settlement and has filed a federal lawsuit against Citigroup.

Almost since the beginning of Mad King George W’s Reign of Error, the US Department of Justice has been little more than an enabler for Wall Street thugs and thieves as well as  war criminals. The “hope and change” we were expecting with the election of President Obama did not materialize, as he named corporate lackey Eric Holder as head of the DoJ. Holder made his millions at Covington & Burling, an elite litigation firm whose client list is a virtual “rogues’ gallery” of corporate criminals of every stripe.

Not that anyone involved in Wall Street crimes will be wearing stripes – or their modern equivalent, orange jump suits – anytime soon. At most, when the DoJ prosecutes corporate crime (a rare occurrence at best), the penalty amounts to little more than a slap on the wrist.

To date, the banking felons of Wall Street have cost US taxpayers approximately $13 billion dollars. Yet, the only one doing any time behind bars is Bernie Madoff, whose mistake was stealing from the rich.  It’s yet another example of the difference between a “natural” person and a “corporate” person: when a natural person commits a financial crime, s/he faces huge fines and long prison terms. When a “corporate” person does the same thing, it not only gets off, scot-free – it usually makes money in the process. And the “natural humans,” executives, brokers and others who are the actual “life-force” behind these “corporate persons,” light up Cuban cigars with $1,000 bills and laugh all the way to their overseas banking institutions. 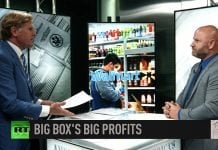