A remorseless doctor was prosecuted for convincing over 500 healthy patients that they had cancer as part of a Medicare fraud scheme. Dr. Farid Fata knowingly prescribed unnecessary chemotherapy treatments for each patient and billed Medicare $34 million.

Fata pleaded guilty to to fraud and other charges. He bullied healthy patients into accepting his chemo prescriptions, saying his patients would die without him. “Your life or your money,” he reportedly told one patient.

The testimony of victims painted an insidious portrait of the death-dealing doctor. Laura Stedtefeld’s father died under Fata’s care and said to him “You poisoned, tortured and murdered my dad.” Maggie Dorsey, one of Fata’s living victims, said “Even though I am not dead, I am a shadow of my former self.”

Fata was remorseless towards the pain he caused hundreds of people. “I cried when I saw him walk in the door,” victim Monica Flagg told CBS News. “He showed no emotion. He didn’t care. I was very angry.”

A medical colleague of Fata notified the authorities of the doctor’s evil practices. Fata defrauded the Medicare system of millions of dollars, but the loss and emotional pain felt by his victims is immeasurable. 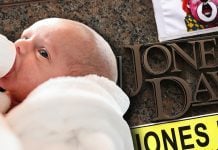