On the subject of climate change, Florida Gov. Rick Scott usually parrots the same “I’m not a scientist” excuse on which many of his Republican colleagues rely. Several scientists decided  to help out Scott, and sent him a letter in June, saying they “would like the opportunity to explain what is at stake for [Florida].”

Scott met with five scientists in his office last week to discuss climate change, but afterwards, the scientists said they don’t think that he really got the message.

At least a third of the meeting, which lasted just 30 minutes, involved Gov. Scott making small talk with the scientists about their subject areas and at which colleges and universities they taught.

“We didn’t have any kind of discussion where there’s this important give and take that’s associated with actually, from my experience, absorbing the information,” Ben Kirtman, professor of atmospheric science at the University of Miami, told ThinkProgress. “I don’t honestly believe the governor is climate literate, and I don’t think he is particularly interested in becoming climate literate.”

Another of the scientists in attendance, David Hastings, professor of marine science and chemistry at Eckerd College, agreed that Scott didn’t appear interested. “If we were talking about things he was truly interested in, that small talk would have been very short,” Hastings said.

While the scientists had hoped the meeting would be a “moment for leadership” from Scott and “a moment to demonstrate to his constituents to that he cares,” the Miami Herald reported that the governor did “not comment, question, or commit to whether he believes the experts’ warnings deserve his attention.”

“There was, in fact, no acknowledgement of the issue nor was there any reflection of the seriousness of this issue,” said Hastings. “I’m concerned he might not do anything.”

Each of the scientists focused on a specific area of climate change, often making its impacts Sunshine-State specific. Florida as a whole, specifically the southeastern part of the state, are particularly vulnerable to the effects of climate change.

“If anybody in the country needs to do something, it’s Florida,” said Jeffrey Chanton, professor of oceanography at Florida State University. “We’re the canary in the coal mine. We’re the ground zero for climate change.”

Scott answered a few questions at a news conference the next day, but wouldn’t say if the meeting had changed his views on the topic, even when directly asked by reporters.

“Well, look, I’m very appreciative of these scientists,” Scott said. “They came forward. They’re like a lot of people. They’re concerned about our future so they came forward with their ideas. I’m looking for solutions.”

While the scientists didn’t get the enthusiastic meeting they wanted, they at least have some hope that it will produce positive effects.

“If the outcome of this meeting is that the governor acknowledges there’s a problem and he won’t stand in the way by saying climate science is not real,” said Kirtman, “that’s legitimate progress, and I’ll feel like we’ll have actually accomplished something.”

“I think any time scientists get to talk to policymakers about climate change science, good things happen,” said Hastings. “It’s easy to be critical, and yet I think the fact that he was open to having a meeting is hopeful and good.”

Watch a video of the climate change meeting from the Miami Herald.

Trump To Spend $10 Million To Suppress Votes Across The Country 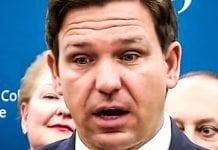