On February 28, the Florida Department of Environmental Protection removed an estimated 1,200 pounds of oily material from the waters off of Langdon Beach in Ft. Pickens, Florida. The coastal observance has been ongoing for several years, but is now in its drawing down period, as the majority of oil monitoring in Florida has ended. So, we went and spent the morning with the guys that found the oil and talked with them about the situation.

The morning began with us meeting the crew that found the tar mat on a section of beach and going on a walk with them. The crew normally walks a section between 400 and 2,000 meters long. According to the crew, which consisted of Joey Whibbs and Dominic Marcanio, the conditions were optimal for searching for oil, and they did find oil while we were with them. Check out the photos and video from our search with them and be sure to read about the history of the spill and details of our conversation with the responders, below. 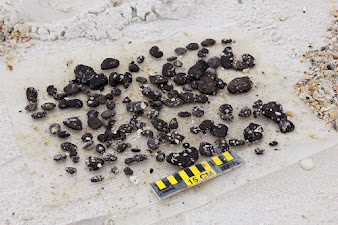 The official Deepwater Horizon response ended in June 2013, after the Coast Guard and BP deemed the residual risk to be “as low as reasonably practicable,” meaning they decided the cost involved in reducing the risk further would be disproportionate to the benefit gained. Active oil spill cleanup operations were also ended in Mississippi and Alabama at that time.

Prior to June 2013, the beaches were patrolled by shoreline cleanup assessment technique (SCAT) teams. The SCAT approach to surveying an affected shoreline originated during the response to the 1989 Exxon Valdez oil spill in Alaska and has become a regular part of oil spill response efforts. Now only two state employees continue to actively seek out and monitor oil in Florida.

Dom Marcanio and Joey Whibbs are employed by Florida’s Department of Environmental Protection (DEP). Since June, they have been patrolling areas of Escambia, Okaloosa, Walton, Bay, Gulf, and Franklin counties. Marcanio and Whibbs spend three to five days per week examining the shorelines and actively collecting and recording any oil they recover.

According to Whibbs, the two have been finding oil consistently since June. They have recovered an average of 3 lbs. of oil per day for 150 survey days since the official response ended. Last week, they discovered a significant amount of oil in the Aquatic Preserve off of Langdon Beach in Fort Pickens State Park, Pensacola.

Marcanio and Whibbs singlehandedly removed more than 1,200 lbs. of oil mat from the site. When the DEP employees encounter oil in such quantities, the process to remove the oil is more complicated, now that the official response has ended. DEP employees contact Coast Guard teams located in Alabama. Interestingly, the Coast Guard teams are prohibited from entering the water “due to safety protocol” and can only survey oil from the shore.

In some cases, oil spill response organizations (OSROs), which are contracted by BP, are called to respond as well. These teams cannot enter the water beyond knee-deep levels according to safety protocol. Therefore, if a substantial amount of oil is found in the water, DEP has a choice to remove the oil or wait hours or potentially days for specialized response teams, such as snorkel SCAT teams contracted by BP, to be organized and dispatched in order to clean up the oil.

Ultimately, Marcanio said, the National Response Center (NRC) will take measures to mitigate any oil pollution that is reported to them. But when he and Whibbs discovered the substantial oil mat last week, they opted to remove it themselves so as not to risk potentially losing the mat. The oil has been buried under sand for nearly 4 years and only came to the surface last week due to shifting sands and erosion.

Marcanio and Whibbs immediately informed NRC and later removed the mat from waist-deep water so that field investigators from NRC could examine it. Those responders determined that the oil was MC-252, oil from the 2010 BP spill.

After the official response ended in Florida, the state made the decision to keep Marcanio and Whibbs on coastal patrol. They are the only two official, active oil monitors remaining in the state. While they are unsure of how much longer their jobs will continue, it is evident that BP oil still remains, hidden beneath the sands of the Gulf, and will likely continue to reveal itself for years to come.

BP was recently ordered by a federal appeals court to honor its Settlement Agreement. The company has made multiple attempts to halt payments to businesses and residents recovering money for economic losses related to the company’s 2010 spill. BP has been trying to shirk claim accountability by complaining that it is being forced to pay inflated claims.

“It is ironic that BP talks about people ‘getting something for nothing’ when that’s exactly what BP is trying to do,” commented Brian Barr, an attorney with Levin, Papantonio and a member of the Plaintiff’s Steering Committee for the BP Gulf Coast Oil Spill litigation

“BP has plead guilty to 11 counts of felony manslaughter for the deaths it caused on the Deepwater Horizon,” he added. “The difference between BP and most other convicted felons is that it has millions of dollars to spend trying to falsely convince the public that it is being mistreated by the American judicial system in the enforcement of a settlement that it negotiated, and to which it agreed.”

Today, the United States government announced its decision to end its ban on BP from obtaining government contracts. After its 2010 oil spill, BP was barred from pursuing new oil exploration leases in the Gulf of Mexico. Now the Environmental Protection Agency (EPA) has made “a deal” with BP, Agence France-Presse (AFP) reports.

The EPA said that BP, a company with an extensive history of environmental and humanitarian disasters, has “agreed to safety and ethics improvements” in exchange for lifting the ban on new leases. In return, BP will drop its August 2013 lawsuit against the EPA, which contested the regulatory agency’s authority to enforce the ban.

According to the AFP, under the deal, BP will be required to “expand efforts in corporate ethics and compliance, enforce a detailed code of conduct, and meet EPA audit requirements,” as well as “protect company employees who report violations and incentivize employees to pursue safety and compliance standards.”

This piece was co-written by Alisha & Joshua. They are writers and researchers with Ring of Fire. You can follow Joshua on Twitter here @Joshual33 and Alisha on Twitter here @childoftheearth. Alisha is also the writer and co-producer for the documentary “Beyond Pollution“.